Where Bad Financial Planning is Learned 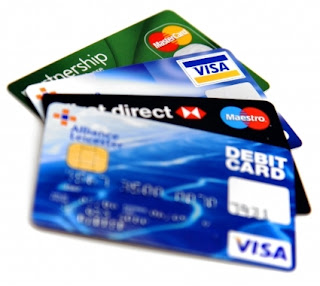 Bad financial habits are handed down from generation to generation.
In This Posting on the Debt Guy site is a pitiful plea from a young person who thinks they are in an unmanageable debt situation - to the tune of $1700.  It is just one of a number of sad stories on that site.

What jumped out at me was that she said "My parents put me on their credit card when I was 15" which told me where she learned her financial skills from.  Not surprisingly, the parent's house was foreclosed upon recently.

We learn, in this country, that debt is not only not bad for you, but a good thing.  Wealth, to me as a kid, was a wallet full of credit cards.  And needless to say, the debt industry pounds this idea into our heads every night on the TeeVee.

What is it that we "need" credit cards for?  They are a means of borrowing money, plain and simple, often at onerous interest rates.  Yes, if you pay them off every month, you won't have to pay interest. But most people (70% according to the credit card companies) regularly carry a balance and pay interest.

And where do we learn this bad behavior? Often from our parents.  I know that growing up, my Dad had a wallet full of credit cards, and I thought this equated to wealth.  He always made a big show about pulling them out and paying with them, which back then was a big deal.

Similarly, this young lady was "trained" by her parents at an early age to see a Credit Card as some sort of rite of passage to adulthood - by giving her a card of her own to use, so she could "learn how to use credit responsibly".

But apparently the lesson didn't take, as neither generation seems to have its financial house in order.  What is not said in the posting is more interesting than what was said.  How was the house foreclosed upon?  What was purchased with all that credit card debt?  Where did the money go?  And why are her parents now "borrowing" her credit card?

Bad financial habits, passed down through generations.  It is hard to unlearn, too, as it is a normative cue that is hard to shake.  Not carry credit cards?  That's just crazy man!  Right?  And yet..... people managed to do without them for centuries

What would I advise this young person?

1.  Cut up the credit card, period.  You don't need it, and so long as you have it, you will keep using it and running up the debt and never paying it off.  Cut it up and throw it away.  If you can't make the payments you can't afford it.  CUT IT UP, PERIOD.

2.  NEVER "loan" your credit card to a friend.  This young lady allowed a friend to use her card to "buy a computer they needed for college".  The friend is now unemployed.  Yes, it is "selfish" to look after your own self, but notice how her friend isn't helping out, now that this young lady is in her hour of need.  You don't "need" a computer for college, and even if you did, you can buy one, secondhand, for a couple hundred bucks.  Ditto for letting her parents use the card as well.  Like co-signing a loan, it is a recipe for disaster.

3.  Call the credit card company and try to negotiate a lower rate - they will close the account and work out a payment scheme.  Alternatively, try a rollover to a lower rate card.  I did one to CapitalOne which has an interest rate of 7.55% and offered a 0% rollover for 12 months.  Watch out, though, there may be a 4% fee levied, or other fees.  Use such a rollover as a means of accelerating your payoff, not as an excuse to spend more.

4.  SELL things you own to pay off the debt.  Use Craiglist, eBay, or a garage sale.  $25 here, $50 there, it adds up to hundreds over time and can pay off a significant chunk of your debt.

5.  Get out of debt, stay out of debt.  Stop looking at debt as a privilege and as a normal way of buying things.  Stop believing that your self-worth is tied to your credit score.  Live within your means - which means living with less "junk" and stuff and services.

But I suspect all of that would fall on deaf ears to this young lady.  Like the Friend With The Perpetual Problem, most of these people don't actually want to solve their problems by making sacrifices or taking action.  They want to preserve the status quo and have someone else solve their problems magically.

For example, I would be willing to bet this young lady is paying $100 a month for cable television, yet can't make the minimum payment on her credit card.  But if you pointed that out, they'd call you crazy.  Cut off cable TV?  That's like living without electricity!