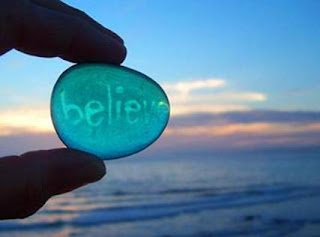 The phrase "Believe In Yourself"  has taken on trite meaning, in terms of self-help programs and lame "successories"  posters.  Regardless, you should have confidence in your own, rational thoughts.


Being debt-free in America is go against the norm.

Most Americans are chasing the false God of Debt - accumulating more and more debt, well into their 30’s and 40’s, instead of paying it down over time.

YES, when you are young and starting out, you may need to borrow money for college and for that first home.  But over time, you should be reducing debt, not increasing it.

And yet, for myself and most of my peers, as we got older, we did just the opposite - we accumulated more debt, on the faulty premise that we could “afford” it as our incomes had risen, and thus we could “afford” the monthly payments.  Worse yet, as interest rates have dropped to near nothing, many folks are taking on more and more debt on the premise that the monthly payments, being so low, make it “affordable.”

But debt has to be paid back.  Even if interest-free, you still have to pay the principle.  And that ends up being a huge drain on your monthly cash-flow and also makes your personal finances precarious.  You may have a nice house, fancy cars, and all that, but it all relies on your making that “big paycheck” every month to pay for it all.  One hiccup in that income stream, and it all comes crashing down in a hurry.

And today, more than ever, steady paychecks are rarely assured.  The old days of working at the widget factory for 30 years and retiring with a gold watch are gone, forever.  You are very likely to be laid off in your 50’s and never work in your chosen field again.

So taking on huge debts - often for status reasons alone - is a very bad idea.  You are better off paying down debt over time and investing your income than in acquiring larger and fancier houses, fancier cars, and just increasing your debt load in response to increased income.

During the recent recession, many people who thought they were "rich” have had a rude awakening.  People I know, who looked down on me because I could not “afford” to lease a new car every two years are finding themselves out on the street after they lost their six-figure salary jobs and the over-mortgaged mini-mansion was foreclosed upon and the leased cars towed away.  Their “wealth” was illusory, based only on a teetering mountain of debt, not on any real accumulation of capital.

Worse yet, I know folks who refuse to give up on their appearance of wealth - cashing in their 401(k) savings (their only bankruptcy-proof asset!) to make monthly payments on upside-down mortgages and fancy cars.  Once they ran through their limited retirement savings, the cars get towed away and the house foreclosed upon.  All it does is just forestall the inevitable and pay more interest to those lovely banks.

I was lucky not to fall into that trap.  Lucky, but also smart.  And by smart, I don’t mean being an Einstein genius, but instead believing in myself, and not what “everyone else is doing” or worse yet, what the TeeVee said we should do.

And yet, if you look at history, entire societies have been wrong about everything, most of the time.  Entire nations embraced Communism or Nazism or other utterly stupid political theories as the “answer” to their social ills, when a 5-year-old could easily point out the flaws in their thinking.  And nations have rushed off to war over issues that, in retrospect, are hard to pinpoint or rationalize (explain the rational “causes” of WW I, for example).

McCarthyism, the hippie movement, Disco, Reaganomics, the Iraq War, you name it.  Things that seemed rational at the time, in retrospect, make no sense at all.  And yet, we all drank the Kool-Aide, or at least a lot of us did.

Believing - truly believing, in your own internal compass is the key to turning around your own finances.  But by this, I don’t mean jumping off the TeeVee bandwagon and then just getting onto someone else’s.

Many folks, it seems, need a charismatic leader or cause or organization, and they are fodder for such causes.  For example, a friend of mine has decided to follow the Dali Lama, without really understanding who he is or what he stands for.  My friend is a Vegan, and he thinks the Dali Lama is, too.  And he would be wrong.  But friends of his have convinced him that this trendy cause is worth following, and so he hops aboard the bus, without thinking where it is headed.  And if you ask him, he’s been on a lot of these kinds of buses, and none of them every took him anywhere (although they all charged him bus fare).

And unfortunately, many in our society are turning away from the TeeVee and “mainstream media” only to embrace a shadowy world of conspiracy theories and crackpot websites.  These are not an answer to their problems, merely just a different set of poor normative social cues.

Stop being a follower!  Stop looking to others for answers - particularly easy answers.  Stop following the herd.  Look within yourself and figure things out for yourself.  The answers are all within you, not external.  And have confidence in your own answers - the hard answers, not the easy ones.

And that is the social norm that is preached to us by the TeeVee, our government, and our society.  Debt is good.  Debt is normal.  Debt is desirable.

The quiet voice in the back of my head, however, kept saying otherwise - Debt is onerous.  Debt is bad.  Debt is nerve-wracking.  Debt makes other people wealthy.  Debt is dangerous.  Debt means never really owning anything at all.

But that voice was shouted down by so-called “financial experts” who have the IRS code in one hand, and their own self-improvement books they are selling in the other, like an ersatz Moses with a queer set of commandments.

“Debt is good!” they say, because the interest is deductible!  Better to have debt and then “invest” your money in tax-deferred savings!  It’s all right here in the IRS tax code!

But suppose the IRS was wrong?  That investing in tax-deferred stocks while acquiring a mountain of debt - just to get a small chunk sliced off your taxes - was a really bad idea?

And of course, that is what turned out to be the case.  One of the biggest hits I get on my blog are people searching the terms ‘Use 401(k) to pay off mortgage’.  Most Americans have a couple hundred thousand dollars in debt on their mortgage, while at the same time having that amount in their 401(k).  The market tanks, they lose have their savings, while their unpaid-for house plummets in value.  Suddenly, it all makes no sense!

The “idiot” who paid off his mortgage, has nothing to worry about, can live on less, and oh-by-the-way, has cash to invest in those rock-bottom stocks which will rebound.

The guy who thought he was wealthy because he owned a lot of toys and had a lot of debt, he’s in serious trouble!  And he can’t understand why.  After all, he did everything the TeeVee said to do!  He drank the lite beer and ate out at ChiChi’s and gained 50 pounds and went into debt to the hilt leasing a Lexus.  Why is he so miserable now?  The TeeVee couldn’t be lying to him, could it?

And these are the folks who are now “teabaggers” - people pissed off because they bought into the lies and then got screwed and can’t understand why it happened.  It has to be someone else’s fault!  And of course, that Someone Else is Obama, a convenient target for weak thinkers.

So they buy into a new set of lies - easy answers that promise them riches, if only they support another odious politician.

None of them - none of them - look inside themselves and ask the hard questions, such as whether their actions may be to blame for their predicament.

And that is a hard thing to do, too.  I die 1,000 deaths, ever time I look back at my life and see the various bone-head stunts I pulled over the years.  I squandered tens, if not hundreds of thousands of dollars over the years, chasing illusory dreams, most involving status.

Today, I am happier and more relaxed than ever, but own less status things than ever before.  And what few I have, I no longer really want.  The highlight of every day is my morning walk on the beach.  It is free.  The ultimate luxury, it turns out, is not spending money to impress others, but just having free, unstructured time to do nothing, if you choose.

It is something that I always cherished as a youth, and why my report cards always said, “Robert has great potential, but does not apply himself”.  Back then, I would much rather just lay out on the lawn behind the school and gaze up at the sky than be “doing things” or owning things.

It seems, 40 years later, I can finally afford to do that again.
Newer Post Older Post Home