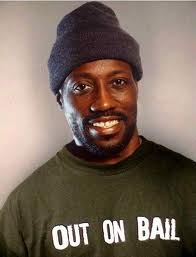 
Wesley Snipes has gone off for a few months in Martha Stewart Jail, after failing to file tax returns for a number of years.  (UPDATE:  He has been released after serving two years).

Again, another case of Michael Jackson Syndrome - he made tens of millions of dollars during that time, but felt that wasn't enough money for him - he shouldn't have to pay taxes on any of it!

Most of us, after a lifetime of hard work, hope to be able to save up a million dollars.  He made tens of millions just in a few years - but felt he deserved more.  It is hard to comprehend, frankly.

And he got off easy.  A jury acquitted him of more serious charges of fraud and conspiracy - believing that he was poorly advised by two tax protesters who were also charged and sentenced.

Of course, he will still have to pay all those back taxes - plus penalties and interest - and as a result, this was not a good outcome for him.

Tax Protesting simply doesn't work.  You can't go to the IRS and simply argue that it doesn't exist or that tax laws are "invalid" - our legal system doesn't work that way.  You can't go around murdering people and then claim that laws against murder were not properly passed.  It simply won't fly.

In a few cases, juries have acquitted tax protesters on criminal charges, when they bought the defendant's arguments that they did not commit fraud "intentionally" but instead as a result of bad advice from tax protester seminars.  But this did not relieve the defendants from having to pay their taxes, plus interest and penalties.  No one gets off scott-free on this one.

But you can make a lot of money telling people what they want to hear - and one thing people want to hear all the time is that you can create wealth without work, or not have to pay taxes.  But like with these fraudulent "money system kits" people should be more skeptical before plunking down their cash.

And here's the real kicker - if the tax laws were not properly passed or had some other legal defect that could make this "opt out" scenario true, don't you think that Congress would pass a new tax law in a heartbeat to fix this error?

And of course, the answer to both questions is simply this:  The "legal arguments" the tax protesters are making are utter hogwash.  They take obscure parts of the tax code (and there are plenty of them) and then snip out bits and pieces until they come up with "....You.....do.....not....have.....to....pay....taxes...."

Of course, those words they snip out provide a completely different meaning.  But uneducated - and even educated - people fall for this.  People who are weak thinkers and want to believe that "but for" the government, conspiracies, or other nefarious plots, they would be billionaires.

And as I noted before, I even knew a lawyer who fell for this.  You'd think four years of law school would have taught him something about Constitutional Law, or at least legal procedures.  But it goes to show you, any idiot can be a lawyer (and I'm living proof of that!).

And like Wesley Snipes, my friend who fell for this tax protesting dodge ended up in a world of woe, as the tax authorities went after him, and of course he ended up paying dearly.

And that illustrates what the bottom line is: weak thinking will always get you into trouble, period. And con artists and flim-flam operators are all willing to indulge your weak thinking.  You can lose weight by eating more!  You can make money from nothing with no work!  You can lease a luxury car and pay less!

And people fall for this nonsense, hook, line and sinker.  And when you talk to them, they have that glazed look in their eyes, and spout the talking points from the propaganda that paid cash money to get.

"I'm losing weight with a new diet plan that allows me to eat all I want!" one chirps, not realizing that the five pounds they lost were due to dehydration from the diuretic pills they are taking.

"The money system will make me a millionaire!" another proclaims, not realizing that pyramid schemes never work out, as they create no real wealth, just accumulate some for the people running the scheme.

"By leasing, I'm only paying for the part of the car I want!" another says, not realizing that they are actually buying a car on onerous terms, and paying far more than they should for it - and buying more car than their income bracket will support.

People believe what they want to believe.  And some folks think, seriously, that if you believe something, you can make it true.  Every year, people fall to their deaths after jumping off tall buildings, thinking they can fly like the people in the Matrix.  But when that sidewalk rushes up to greet them, face-first, they realize, too late, that reality has its own agenda.

And yes, it is "harsh" to have to live in reality and deal with it.  But not as harsh as you might think.  People in our society are generally goodnatured and want to see you succeed, believe it or not.  And in many cases, you can achieve a lot in this world, simply by asking for it, nicely.  The worst they can do, is say no.

Once you live in reality, you will find that the real sweet deals are open and available to you.  Why?  Because bankers and lenders and businessmen, in general, don't like to deal with dreamers and people living in fantasy worlds - such folks scare them to death, as they generally default on their obligations when their fantasies hit hard reality.

On the other hand, if you live your life in reality, the powers-that-be will take you a little more seriously, and not only will your life get better, but like compound interest, it will take off like a rocket.

I don't feel too bad for Wesley Snipes - who would?  He made tens of millions of dollars in his career, and it still wasn't enough.  And yet, if he conservatively invested that money and lived a lavish, but within-his-means lifestyle, he could be quite well off by now - and not in jail.  For most of us, the idea of living on "only" ten million dollars seems like quite a reasonable proposition.  That is, if you live in reality, and not a fantasy world.
Newer Post Older Post Home