Do You Need an ALARM SYSTEM? 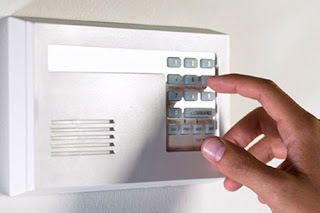 Do you need an Alarm System?  For many folks, the answer is NO.
First, a disclaimer.  I work for a few people in the Alarm System industry, so I have a vested interest in selling you an alarm system.  I've had two over the years, one for my office and one for my home, both fairly extensive ADEMCO wireless systems, with door, window, fire, smoke, and flood sensors, as well as multiple key pads, remote controls, and even garage door sensors.

Did they prevent theft or save my home from a fire?  Not really.  Did they cost thousands of dollars in terms of hardware cost and monthly monitoring fees?  Yes.  Did they set off countless false alarms?  Yes, that too.  Did they provide me "Peace of Mind?"

Well, what have I said all along about people trying to sell you "Peace of Mind" - whether it is a new car, an extended warranty, or whatever.  They say "buy this and you are buying peace of mind!" and usually they are selling you a bad bargain.  You can't BUY peace of mind, it only comes internally.

Actually, in some respects, the Alarm systems provided less peace of mind than not having alarm systems.  I was constantly worried about false alarms, which annoyed the neighbors and summoned the Police, usually resulting in threats of fines.  The only time the alarm system properly triggered an actual alarm was when an opossum broke into my office in Old Town Alexandria and rummaged through the basement.  I kid you not.

Alarm systems and companies have a colorful history.  Early systems connected banks and other secure areas directly to Police Stations via hard-wired alarms, so that if the bank were robbed, a clerk could press a button and ring a bell at the Police Station.  Such systems were really only practical for Banks and other institutions that could afford to run a wire to the local Police Precinct.

Auto-dialers allowed the everyman to afford an alarm.  Connected to a phone line, such systems could monitor the premises for doors being opened, windows being opened, glass breakage, etc., and then dial out to an Alarm monitoring company, which in turn would then dial the local police agency.  Such systems do work, but often just as a deterrent.  And since they connect via phone lines, they can be readily defeated by simply cutting the outside phone line or disconnecting the phone line at the Network Interface Box (and if posing as a phone company repairman, all the better).

During the early years of the alarm business, many shady characters got into selling alarm systems.  It has been reported that some would actually burgle homes (or pay an accomplice to so do) after making an unsuccessful sales call.  When returning to the scene of the crime, the alarm salesman would then have an easy sale.

Since those bad old days,  the industry has grown up - somewhat.  But many large companies have gotten into the act, and while they do not burgle the clients' homes, they do overcharge for basic alarm systems and monitoring services.

One large company advertises a basic system, leased, along with alarm monitoring services, for $99 a month,  which is a lot of money - enough to buy a good used car.  And the system provided is usually cheap - a single motion sensor, a door switch, and an alarm panel.  No fire detection, no window switches, not even a back door sensor.  A burglar entering the back door and going down into the basement might not set off the system at all.

A better choice, I think, is to spend the money on a system that monitors all windows and doors, has glass breakage and motion sensors (the latter only if you do not have pets) and also fire and/or smoke sensors.  The latter are particularly important as early detection of a fire can save you a lot of grief, particularly if you are running a business.  Such a system can easily run into the thousands of dollars to install (about $2000 to $3000 in my experience).

Monitoring is the other half of  the deal, and most "big name" companies want $30 or more a month to monitor your alarm.  This is a lot of money.  If you shop around, other companies will monitor your alarm for  a lot less - on the order of $10 a month or so.  And even if you have a "Proprietary" Alarm panel, companies like NextAlarm (disclaimer, a client of  mine!) can convert your alarm system easily using a user-installed re-dialer box.

So is an alarm system worthwhile?  Yes, in some instances.  For my office building in Old Town Alexandria, it was not a bad idea to have.  My neighbor's business burned to the ground one year, and while insurance paid for the reconstruction of the building, the loss to her business was fairly staggering.  So I put one in, with smoke detectors on all levels.

We also installed one in our home, although there was little, if anything, worth stealing in our home.  Things like computers, televisions, and the like are worth only a few thousand dollars, at best - hardly more than the cost of the alarm system.  And even if your entire house was "cleaned out" by burglars, chances are, your insurance would cover most of it, except the deductible, which is probably about equal to the cost of an alarm system.

For me, living in a neighborhood where people don't routinely steal things is a lot cheaper than an alarm.  So from that perspective, an alarm might not make sense - better off to move to a nicer neighborhood than to live in a poor one and then try to protect everything with bars on the windows and alarm systems.

And as I get older, I tend to own less and less things - and particularly expensive things.  I have no gadgets, no expensive jewelery, no fancy TeeVee or stereo system.  Heck, that is what I have learned over the last few years - owning a lot of crap never made me happy, and for most people (particularly poor people) it just you something else to worry about getting stolen.

The alarm companies like to use FEAR to sell alarm systems, and as I have noted before, FEAR sells.  And when someone uses FEAR to try to sell you something, well, like "peace of mind" it probably is a raw deal.

In the ads on TeeVee, the mad rapist tries to break into Mr. & Mrs. White America's home.  The ads are careful to show the mad rapist as white, lest they be accused of racism, but we all know what the subtle message really is about.  And the mad rapist is dressed like the Hamburgler, with a mask and everything.   Talk about far-fetched scenarios!  Dad is not home to shoot the bad man, so helpless Mom hits the keypad on the alarm system, and the yelping alarm scares off the intruder.  The Police are on their way! Run away bad man!

Good thing the mad rapist was too stupid to cut the phone line!  Oh, wait.

But as I have noted in the past, the fear of crime and the reality of crime are two different things.  The media over-plays the incidence of crime, so that people tend to think they are more vulnerable to crime than they actually are. Once you are out of college, your chance of being a victim of crime is pretty low.   And for the average middle-class American, the only crime they are a victim of, is getting their 10-speed ripped off in college.  As an adult, you find yourself remarkably crime-free, at least on a large scale.

The choice is yours, of course.  But if you are an average American, living in the suburbs, chances are, your home won't get burgled.  And if you don't own a lot of expensive junk that is easy to steal and fence, chances are, if you are burgled, they won't steal much.

Possessions are a form of slavery, and having expensive toys often ends up being a hassle, as the tax man will tax them, people will damage or steal them, and you end up having to worry about them, constantly.  It is better, I think, to do things than to own things - more relaxing and more enjoyable, not to mention, less expensive.