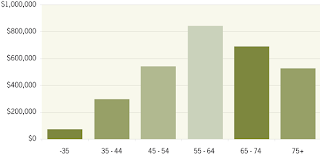 Comparing your own wealth to that of others is a risky proposition.  Looking at what the herd is doing will only insure that you get slaughtered.
You've saved for retirement, paid down debt - maybe even paid off your mortgage.  You watch your investments, try to spend frugally, and still wonder - do I have enough to retire on?  And therein lies the problem.  No matter how much you save, you may end up wishing you saved more.  There is no real finish line for this game, until you kick the bucket.

How much do other people save?  What is the average net worth of the average American?  How does your net worth compare to others in your age and income group?  Again, this is not a good way to measure your own efforts - by comparing them to others.  Most Americans under-save for retirement, so the numbers can be a bit deceiving.  Plus, many Americans still have pension plans, so they need not save as much for retirement as those of us with self-funded retirements, such as 401(k) or IRA plans.  It is like comparing Apples and Oranges.

And statistics can be misleading.  For example, the Wall Street Journal reported that the average net worth of Americans was $182,000, which to some people, sounds like a lot of money.  But it isn't really, if you expect to retire on an income of say, $50,000 a year (which is not a lot these days, either, and inflation could easily eat that right up!).

Now bear in mind that from that money, you have to pay for all your food, utilities, auto expenses, clothing, home repairs, etc.  Hopefully you won't have a mortgage at that point, but if you do, figure that in, plus your property taxes, income taxes, and the like.

Now throw in some curve balls, including Medicare supplemental insurance, prescription drug insurance, and other unexpected expenses.  Still think $182,000 is enough?  At the very least, you might end up tapping into your principle before too long.

And suppose your spouse dies, and you only get a portion of their Social Security as a survivor's benefit?  What do you do then?

And what about these plans the GOP has to turn Medicare into a subsidy for health insurance for the elderly?  If these plans go through, the "retirement to grave" coverage will go away, and you will have to buy your own health insurance, and pay the deductibles and likely a good share of the premiums as well.  Your health care costs could skyrocket.

Sounds bad, eh?  Wait, it gets worse.  Consider this:  The Fed, right this very minute, is intentionally buying back its treasury bills by printing more money - with the stated goal of increasing inflation.  Inflation.  Remember that?  We had that in the late 1970's and early 1980's to the tune of 10% or more, annually.  Inflation like that can wipe out your life savings in short order.  A few years of double-digit inflation and $182,000 won't buy you a secondhand car.

And of course, since your money is likely tied up in stocks or real estate (your home) your net worth could fluctuate based on market conditions, as it has in the last few years.  If the stock market tanks (and we know it never does that, right?) or the Real Estate market stagnates (and we know it never does that, too!) your investments could drop in value, significantly.  This is, of course, one reason your retirement savings should be in "safe" investments as you get older, but such "safe" investments produce little income.  The interest on a government T-Bill for $182,000 isn't going to be bubkis.

Younger people looking at these numbers might get scared.  You start out young with nothing, and it seems that climbing the financial ladder is, well, damn near impossible.  Your net worth is zero, or perhaps negative.  How can you possibly get ahead if all you can put aside is a few grand a year- if that?  Well, time is on your side, and compound interest is a marvelous thing working in your favor.  If you can save even a little bit - and avoid borrowing for status items like cars - you can be very, very wealthy by the time you retire.  But you have to make that choice early in life, and the longer you wait, the harder it gets!

When I was younger, like most poor people, I had a negative net worth.  I owed more on car loans, student loans, and other debt, and had little in the way of equity.  And much of that was unnecessary.  I sold a perfectly good working car to have a "brand new" car when I was 21, and ended up spending a ton of money on car payments and insurance over the next three years.  By the time I was 25, though, I owned a home with some positive equity and owned my own cars outright.  But student loans negated what little I had managed to accomplish in the way of net worth.

When I went to law school, my net worth went negative again - with more student loans and more car loan debt (had to have the new and shiny, I guess!).  And when the Real Estate market collapsed in the early 1990s (20 years prior, almost exactly to the day of the last collapse), we probably had negative equity in our home.  So by 1992, our net worth was again zero, or perhaps even negative.

That was the point I realized that I was spinning my wheels by purchasing shiny consumer goods and financing them "on time" - that my Estate was not increasing in value over time, which it should.  We took action.  We did two things to built up our portfolio.

First, we both put the maximum allowed into our 401(k) plans and also contributed to after-tax savings.  We also put money into life insurance, which over time has increased in value to nearly $100,000.

Second, we invested in Real Estate at a time when it was dirt cheap and they were giving it away - right after the crash of 1989.  We bought low, rented at a neutral cash flow and when the market just seemed to crazy, we sold out.

Similar opportunities are around today, if you know where to look.  If you can find a property that you can rent out for more than the cost of the mortgage, insurance, and carrying costs, it might not be such a bad deal.  And if you can make some sacrifices in the areas of disposable income, you can put more money into your 401(k) or IRA.

If you can avoid the temptation to buy a new car, have a new toy, or try to impress the neighbors, you can sock away a lot of money - potentially a million dollars or more - by the time you retire, even if you are just an average salary slave making "only" $100,000 a year or so.

And it hasn't been easy and we have made mis-steps along the way.  We fell back into the "gotta have it now" spending habits and incurred more debt than we should have, and arguably squandered windfall profits we could have invested.  We, too, got caught up in the euphoria of the last decade of decadent spending.  The only good thing is that we didn't get as caught up as others and we sensed that something wasn't right about all this "something for nothing" wealth floating around.

It is tempting to look at the average net worth of most Americans and pat yourself on the back if you are "ahead" of the cuve.  But don't get too cocky - even if you are "above average" that does not mean you necessarily have enough saved for retirement.  Bear in mind that that "average" includes people who have pensions (and thus less in savings) as well as chronically poor people who will be broke their whole lives and living on Social Security when retired.

And if you are behind the curve, well, that is a good incentive to save more and spend less.  I have outlined a number of techniques in this blog where you can save money - it is not hard to do.  And the savings are indeed huge.  Most middle-class people squander a lot of money on things, without even thinking why.

Do these savings techniques work?  Well, yes.  I am far ahead of the "average" American, according to the graphs and links shown above.  And I got there, in part, by living an inexpensive, yet interesting life.

So, it is up to you.  If you want to be poor, take advice and bad normative social cues from poor people - the middle-class poor - like your fellow neighbors and workers - or from the TeeVee.  Or if you want to get wealthier, ask someone who is wealthy what they do.

And yet you'd be surprised - most people do just the opposite.  They follow the herd when it comes to spending and finances - and wonder why they never seem to get ahead in life.  It seems fairly obvious to me, why.
Newer Post Older Post Home