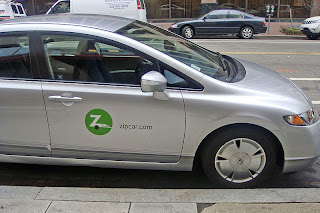 In many urban areas and college campuses, car-sharing services have been developed.  The largest of these is ZipCar, has filed for an IPO.  Does this service make sense for you?  Does investing in ZipCar make sense?  A heavily qualified " maybe"  to both.

If you are an American, chances are, you own a car, and chances are, your car is sitting idle right now.  So the idea occurs naturally, why not share cars?  And back in 2001, a couple of people in Cambridge Massachusetts founded ZipCar.  The idea is simple.  Instead of owning a car, you can rent one for an hour or a day, to run errands or pick up things, instead of owning a regular car.

If you take mass transit to work, and need a car only occasionally, it makes sense.  But if you need a car to drive to another city, well, it might not work for you very well.  And if you need a car fairly often, it may not work at all.  And of course, if you want to use a car during popular times, like the weekend, you may find yourself competing for a limited number of cars and time slots.

And of course, like any other communal ownership scheme, there are drawbacks.  There is little incentive to take care of the car, wash it, clean, it, maintain it, or even drive it gently, as you would for a personally owned vehicle.  If you get to the car, and find that the previous renter had left his McDonald's wrappers in it, what do you do?  Suppose they spilled a milkshake on the seat?  Left cigarette butts in the ashtray?  Or a roach in the ashtray (and you get pulled over?).  Owning your own car, of course, avoids those sort of issues.

But for someone who rarely needs a car, it may be worthwhile, provided the service is in your neighborhood.  Oddly enough, Zipcar has recently pulled out of some markets, notably the L.A. Market.  They did this after merging with competitor Flexcar.  It is not hard to read the tealeaves on this one.  Neither company was making money, and Flexcar was likely hemorrhaging cash on is L.A. operation, so they shut it down.

Why not L.A. - the car city?  Well, mostly because owning a car in L.A. is part of the culture, and being such a sprawling city, it would be hard to put ZipCars in areas where large numbers of users could access them.  Tellingly, they left the vehicles in the college campus areas (high concentration of users) but abandoned other city locations.  I suspect that accidents, theft, vandalism, as well as lack of use were other reasons behind their pulling the plug from the market.


ZipCar plans an IPO, but when?  Zipcar has recorded net losses every year since its inception, and by the end of March 2010 it had racked up a $56.4 million deficit. The company expects to lose money again in 2010 and plans to make significant investments as part of a massive expansion effort.

So these car-sharing companies have yet to really show any real profits.  ZipCar appears to be claiming it made a profit in 2009, buts its IPO, approved in July of this year, does not appear to have gone anywhere fast.

Are these car-sharing plans the wave of the future?  Perhaps not.  For most people, owning a car is an emotional issue, with the type and model of car a statement of who they are.  And ironically, the same is true for ZipCar users, many of whom are embracing "alternatives" to traditional car-based lifestyle, and for whom a ZipCar, like a hybrid, is a social statement more than anything else.  Outside of niche markets like college campuses and liberal neighborhoods, these might be a tough sell.

Thus, overall growth for ZipCar might be flat in the long term.  It would sell in Ithaca, New York (college town, high population density, disposable income, left-leaning), but probably less so in Syracuse (population too diffuse, incomes lower, less liberal).  Thus, long-term growth for the service does not seem all that great.  They probably already have all the subscribers they will have, period.

And most Americans live in suburbs, where a ZipCar just doesn't work.  You can't walk 5 miles in a suburb to get to your ZipCar.  Maybe if the car would drive itself to your door, it could work (and you know, that just might happen, sooner than you think!).  But for the time being, low population density areas, which is more and more of the country, are just not going to work.

So, it sells in San Francisco (dense residential population, left leaning, disposable income) and New York City (ditto) and Boston (ditto).  But perhaps not in Dallas or Houston.  Austin, maybe (but that is a sprawl city as well).

So for me personally, I won't be using the service and won't be buying the stock.  I wish them the best of luck, as it is a good idea and a good way to save resources and also a great service for a city person who needs a car part-time.  But I think it will remain a niche market for many years to come.

Unless they can get the cars to drive themselves to your door.....

Before you join the service, Read This Blog with comments from actual users.  I am not sure if their insurance policy is still the same - being stuck for $14,000 in collision repairs (cash!) is not a very good thing.  And note, as I projected, that dirty cars and unavailable cars (during peak times) were a common complaint.  And note that one user said he spent $3200 in three months.  That is more than enough to buy a cheap, secondhand car and even pay to park it, in NYC.  If you use a car a lot, I don't think this is a cost-effective idea.  It was also disturbing that the daily rental rate is not far below that of a car rental agency, perhaps even more!  Low-cost car rentals can be as little as $25 a day in some places....

Hmmm..... what was the point of this service again? Saving money?


UPDATE:  This article on CNN.com this morning illustrates some of the "gotcha" problems with Zipcar.  The author rents a car for $50 (hmmm, that's as much as Hertz charges!) and then is zinged with a $750 repair bill for damages that occur to the car after he returns it.  Since there are no manned return centers, the cars can be damaged by anyone, even vandals - and you are liable for it.

This is the sort of thing that might turn people off ZipCar and onto more traditional rentals.

Once upon a time, rental car companies had agencies in the middle of big cities - and you could rent cars when you needed them.  Slacking demand forced them to close.  ZipCar has not really so much invented anything new, as it has reintroduced the downtown car rental agency.

I suspect that the big car rental agencies might wise up and offer downtown and neighborhood rentals in the future - cutting into ZipCar's margins.  For $50, you can rent a regular car for the DAY, and when you return it, they sign off on the car as not being damaged.
Newer Post Older Post Home