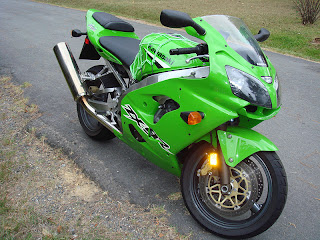 When you see a kid riding down the street at 80 mph on one of these, with no helmet and no protection, other than a t-shirt and sandals, you have a pretty good idea of what the predicable outcome is.


Predictable outcomes.  This is, perhaps the difference between youth and old age.  As a youth, we tend to look at events in our lives as a series of causational chains.  "But for" some intervening event, bad things would not happen.

So to a kid riding his crotch rocket at 70 mph in the city, with no protection other than a t-shirt (which is riding up to show that all-so-important lower-back tattoo), the cause of the accident is the lady who turned left in front of them.  In the intensive care ward - or at the funeral - the kid (or his friends) will say, "Gee, didn't that lady SEE the motorcycle?  She is to blame for little Joey's death and/or dismemberment!"

But an older person, having ridden enough motorcycles, fallen off of them, or having been hit by a cop (yes, it happens), realizes that the old-lady-turning-left-in-front-of-the-motorcycle is not some weird unpredictable outcome but rather almost a preordained conclusion.  You ride a motorcycle, someone in a car will hit you, plain and simple.  Maybe today, maybe tomorrow, but eventually and surely.  The law of probability must be obeyed.  The beast must be fed, often with blood.

But youth says, "It's OK, I'll be careful!" as if driving skill were the issue at hand.  And this reflects the mindset that causational chains are what determines outcomes.  But the only causational event that could affect the outcome would be to go back in time to the point where the youth signs the loan papers on the crotch rocket at the Jap Bike Dealership.

True enough, you can try to ameliorate the outcome by wearing full leathers and a helmet and taking other precautions.   This reduces risk, but does not eliminate it.  And the risk of death or injury on a motorcycle remains, alas, very high.  And this is a shame, as riding a motorcycle is a lot of fun, but the cars out there really are a buzz-kill.

One sure way to avoid such outcomes is to not go into a casino at all - ever.  Or to go to a bar, without a designated driver.  Or to not ride a crotch-rocket motorcycle at 100 mph at age 17 with no protection whatsoever.  If you simply don't do these things the bad outcomes are guaranteed 100% not to happen.

And when the outcomes are particularly nasty, such as being a paraplegic, or spending months in intensive care, or gambling your life's savings away, or getting into a DUI accident and killing an entire family, then maybe just not doing the activity at all is a pretty smart idea.  The risk/reward balance just doesn't make any sense.

And no one gets a credit card with the idea, "Hey, let's rack up a lot of high-interest debt and go bankrupt and spend a decade paying it all off!  Wheeee!"

And yet, that is a predicable outcome of having a high-interest rate "rewards" card, and one that happens to a staggeringly large number of Americans.   And the best way to avoid this predicable outcome is to just not play that game.

And yet, many readers write me and say, "Yea, well, but I'll be safe and drive carefully!  Because I made $500 in rewards miles already!"

And like the kid with crotch rocket motorcycle, they think that the credit card thing is a causational chain of events.   That "but for" someone being fiscally irresponsible, the whole deal would be just fine.  Those people who got into trouble just didn't drive their credit cards carefully enough!

But the reality is, life takes unexpected turns, and fiscal responsibility is in being prepared for those turns, and not putting yourself into a situation where you are so leveraged that the slightest unexpected event bankrupts you.

For example, say you have a miles credit card and a motorcycle.  You get into that motorcycle accident and spend months in the hospital.  Regardless of your "best intentions" to pay off the balance every month, your credit card balance creeps up over time.  Medical bills are the number one cause of bankruptcy in this country, but what is unstated is that amount of credit card debt that accompanies this.

It is like running or rolling stop signs.  You can do this, for years and years, and never get into an accident (but likely have a lot of close calls and have people honk at you).  But because of the A-pillar phenomenon, eventually, you will hit someone.   It is a predictable, and perhaps inevitable outcome.  There is a persistent, yet low probability, which added over time, comes to 1.0.   And yet, there is an easy way to 100% avoid this kind of accident - come to a full and complete stop at every stop sign.  So why not do it?  The benefit (saving 2.5 seconds) certainly does not outweigh the outcome (major accident, insurance increase, etc.).

And that is the whole deal, I think, in personal finances - looking at the probabilistic model or quantum economics, and not at your personal economic situation as a causational chains - a series of individual decision tree actions.   You cannot be perfect all the time, that is a given.  Not all of your investments will pan out, that is a given.  You will waste money on stupid things - that is a given.

What you can do is, look at the statistical model and say to yourself, "What can I do, in general terms, that will prevent bad possible outcomes which are quite predictable, statistically?"

And the answer you get is things like:  Diversify your portfolio.  Statistically, you come out ahead, as some investments do well, and others will tank.  It is the safest and best bet.

What the financial gurus and stock channels say is the opposite.  They follow the causational chain theory and promote stock and investment picking.  If only you make the right individual decisions, over time, you will become wealthy beyond your dreams!  The problem with that model is that one mistake can sink you, just as a moment's inattention at a traffic light puts little Joey in intensive care as his crotch-rocket slams into the side of Martha's Buick.

Most financial books, advice columns, and the like tout this decision-tree theory.  As if an individual decision could be held accountable for trends that span decades.

But a better approach is to not to rely on individual decisions and events to keep your financial house afloat.  Paying off the balance on a credit card every month is a fine idea, provided you do it 12 times a year for 50 years.  Just do that 600 times without fail and you will be just fine, right?  And so far, you've done it, what?  12 times?  Good plan.

Doing things that avoid risk or at least balance risk and reward is a better quantum approach.  And yes, this means just "not doing" a whole host of dumb things which usually lead to financial ruin.

So when I say, "Never Co-Sign A Loan!" I mean NEVER.  Not, "Well, unless it is for a really good reason."   Why?  Simple.  The predicable outcome is financial ruin, and no "really good reason" justified that.

When I say, "Never get a 22% interest credit card" I mean NEVER.  Not, "Well, unless you pay off the balance every month."   Why?  Simple.  The predicable outcome is that you will not pay off the balance one month, and the high interest will make it impossible to do so and very quickly, the interest charges will negate years of cash-back bonuses.  It can take a decade to pay off such credit cards.   Why risk it?

Engaging in any financial behavior which relies on such decision trees is something to be avoided.   Borrowing money presents such decision trees - a continuous stream of debt payments that need to be serviced, which assume you will keep your job and have a steady income (things that people are finding out, are not assured!).  So you have to limit these to where it is really necessary or worth the risk.   A mortgage?  Yes.  A car loan?  Maybe not.   A credit card?  Hell no.
Newer Post Older Post Home