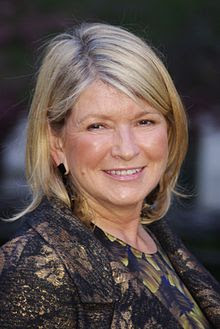 Buying stocks because they are trendy or publicized a lot is a really bad idea.


Another day, another IPO.  It is a game that has gone on for a long time.  IPOs are just vehicles that allow the founders of a company to cash out.  They make money, you generally lose money.  Period.

A few years back, Martha Stewart decided to do an IPO with her "Martha Stewart Living Omnimedia" (MSO) and it made big headlines, as she rang the bell on the trading floor of the New York Stock Exchange.

But of course, this was not the first time the Diva of Home Craft Projects had been on the floor of the Exchange.  We all learned later on that she in fact used to be a stockbroker (a fact conveniently excised from her Wikipedia entry) and left the business - so it came as no surprise that she later on go snagged in a stock deal gone wrong.  Some have intimated that she left her lucrative career as stock broker for reasons other than to "spend more time with family" or "move to Connecticut".

At the time, it seemed she was everywhere - even hawking sheets at K-Mart.  K-Mart?  That should have been the first sign of trouble.  K-Mart.  Think about that.  The only place that makes Wal-Mart look classy.  Target, I could see.  But K-Mart?  300 threadcount sheets for your trailer home?  Uh, no.

And yea, she had a magazine and some books, and a television show.  But how was this going to be a huge moneymaker for shareholders?  And why did she need to sell stock?  To raise capital to buy a new glue gun?  Of course not.

But what of the stock in her company?  Well, it was pretty much a bad bet from the get-go, and like most IPOs was just a chance to sell a small part of the company to retail investors.

On October 19, 1999, Martha Stewart Living Omnimedia went public on the New York Stock Exchange under the ticker symbol MSO. The initial public offering was set at $18 per share, and rallied to $38 by the end of trading, making Stewart a billionaire on paper. The stock price slowly went down to $16 per share by February 2002. Stewart was then and continues to be the majority shareholder, with a commanding 96% control of voting power in the company.

Since then, the stock has sunk less than $5 a share and looks to stay there, long-term.  And yes, I bought some of this stock at $20 a share, hung onto it when it went up, and then rode it back down to $16 a share.  Stupid move.  Someone said, "Gee, she is in the paper a lot, and selling lots of books and has a TeeVee show, so it must be a money-maker!"

Perhaps for her, not for us, the little people.  No dividends, no earnings, nothing.  Never buy a stock because it is trendy - popularity and press does not equate into profitability.

Fortunately, I did not buy much of the stock and lost only a few hundred at most.

And at the time, I did not understand the investment or how it was to make money  - or even how IPOs really worked.  I did not realize that the publicly traded stock represented less than 5% of the company, and as shareholders, we would have no rights whatsoever in the company.   She could wipe her ass with our stock certificates, and the most we could do was give her our blubbering thanks.

Krispy Kreme was another such stock (and another Wikipedia Entry that appears to have been sanitized of any controversy or mention of an SEC investigation - use Wikipedia with caution!).  A doughnut shop that made good donuts, people got overexcited about it and it went public and people bid the shares through the roof.  There were allegations of some flim-flammery in the bookkeeping, but it basically came to nothing.  But yet another bubble burst when people figured out, "Hey, they're just DONUTS, people!"

Whether it is a lady who makes decorative owls out of pine cones, or an old-school southern doughnut shop, the result is the same.   Small investors bid up the stock, based on talk on the "Today" show or hype in the press (which if it is critical at all, is so in muted tones) and then get hammered as the bubble bursts and reality hits them smack in the face.

What did I learn from my $500 mistake with Martha?  Stock picking is for chumps, for starters, and buying stocks you don't understand is really a very, very bad idea.  You are buying a pig-in-a-poke and just hoping that the price goes up because, well, because you hope it will.  Faith-based investing is for idiots - and I should know by now!  Oh, well, at least I didn't buy Krispy Kreme - other than the donuts themselves.

Many of the comments I get on this blog are disturbing.  People write to me and say, "Yea, these 22.5% interest credit cards can bankrupt you, but hey, do you think these frequent flyer miles can work out?"

Or they say, "Yea, trying to pick stock winners and losers is a bad idea, but howabout that Facebook IPO?  Surely THAT will go somewhere, right?"

Or, "yea, gold is a bubble, but you know, I have a system for making money from it!"

The bottom line is, what happens to small investors is that they get creamed trying to be fancy with these types of deals.  We like to think we are smart or clever or are "playa's" and are going to make a big score and end up rich!

Like most of Ralph Cramden's get-rich-quick schemes, they end up going horribly wrong, and the poor sap who gets snookered into them ends up broker than before.

It doesn't matter if it is some MLM marketing scheme, a pyramid scheme, a day-trading scheme, some trendy stock, a toxic credit card interest rate baited with free cookies, or a payment-optional toxic-ARM loan on an overpriced house.  The bottom line is the same:  Joe Consumer thinks that he is going to make it big and beat the odds.  And what happens?  He loses it all, generally.  The odds beat him.

Not being a Billionaire is not the worst tragedy than can befall you.  Thinking you can be a Billionaire and then falling for some Billionaire's wicked scheme is.  You end up broke, he ends up richer.

And the common denominator is the belief in something-for-nothing, the trick to the tiny belly, the secret trick to getting rich.

They throw pennies at us, hoping we spend dollars - and most people chase those pennies.

And yet, people read my blog - of all places - looking for secret tips and tricks, when I keep harping that there are none.  Spend less than you earn, save money, invest in a panoply of investments.  Diversify.  Don't get greedy.   Don't invest in things you don't understand.  Go for simple, basic bargains.  Avoid complexity.

These are not tricks or secrets.  The are just common sense.  Not sexy, no sizzle, just basic truth.

You are far better off having simple investments you understand than trying to chase complexity in your life with the hope of making it big.  Most folks succeed at the former and fail miserably at the latter.
Newer Post Older Post Home