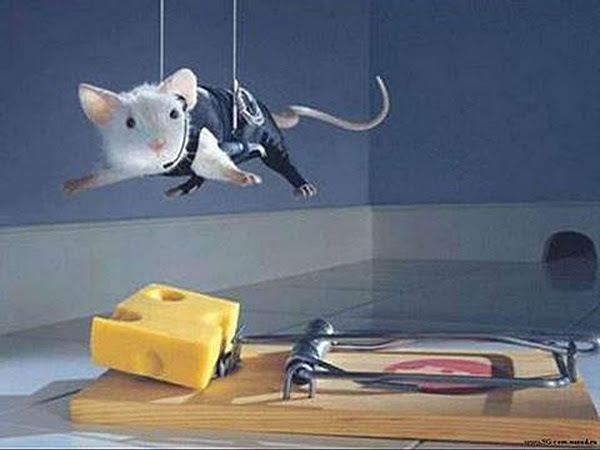 Mouse Ethan Hunt tries to steal the cheese.  In real life this does not work out well.


Stealing the cheese.  A reader tells me he likes to do this - to look at these promotional gags and figure out a way to run off with the "bait" without setting the trap.  Super-couponers do this all the time, too, setting up websites that tout deals that combined coupons with rebates, with super-bonus-days, to get away with free stuff, or in some cases, free product and cash-back!

Can it be done?  Yes, sometimes.  Is it a valid strategy for getting ahead in life?  No.

As I noted in What's the Name of Your Yacht?, the people who engage in couponing and other techniques for skimming money from corporate enterprises, rarely end up well off.  If there was really "free money" in this sort of thing, then someone would be doing it for a living - and have a yacht.  But tellingly, the people who do this are poor, or at best, middle-class, and never seem to get ahead.

Why is this?  Well, for starters, there are just not very many deals like this - where you can combine a coupon with a rebate, and whatever, and come out ahead.  "Limit one per customer" usually means that you can't make more than a few dollars at this.

Yes, once in a while, someone scores big with airline miles, like the pudding guy.  But no one gets free fighter jets or free cars out of these deals.  And those carts of free food?  Mostly stunts - you can't do that on a weekly basis, without securing a steady stream of manufacturer's coupons in advance.

The second problem with this technique is that it is a time-bandit and distracts you from the real financial issues in your life.  And this is by design.  The powers-that-be don't want you to think too long and hard about the fundamentals of the daily financial transactions you are engaging in.  It is a good idea to be in so much debt?  Is using a credit card for every purchase such a swell idea?  Do you really need to be consuming as much as you are?  Are you saving enough?

They don't want you thinking that way.  Because if you do, you might start making financial decisions that make sense - for you.  And you will stop just buying whatever piece of crap they are hawking on the TeeVee all day long.  Bad food,  trendy and poorly-made clothes, trendy electronics, poorly made gas-hog cars, gaudy and overpriced mini-mansions - all crap you don't need, or really want, if you stopped to think about it.

But they don't want you to stop and think.  And to prevent you from thinking, the Carnival is coming to town!  Wheee!   Corporate America puts on a perpetual Circus to distract you from life - loud television and radio advertisements, as well as product-placements in the programs themselves, to sell you on the idea that buying a new car every three years is a societal "norm" and that not saving money and accumulating wealth is OK, too.

And part of this Circus environment is the idea that "smart consumers!" will take advantage of "special deals!" offered by Corporate America in the form of free installation, rebates, coupons, BoGos and the like.  And the more odious the deal, the more it is loaded up with free cheese.

Credit cards offer every sort of cheese, from frequent flyer miles, to cash-back bonuses, to supposed special VIP back-stage passes (for you and a select group of a million other card-holders) if only you will sign on to a 22% interest rate card.  Lots of bait, because the trap is very deadly.  Again, and this is the Reader's Digest version:  If you get caught in this trap, you will have to gnaw a leg off to escape.

Cable and Satellite TeeVee offers "free installation" and free set-top DVR boxes.  Is this expensive?  You bet.  I had HughesNet satellite Internet service at the lake (no cable modem, no DSL) and the cost of "installation" was about $800, for the dish, the satellite modem, and the setup and aiming.  Since they have so few customers, they don't offer "free" installation or free equipment.

So, when a company offers to put four set-top boxes in your house, and run the coax and set up and aim a dish, that is a lot of free cheese.  And that is why they charge $100 a month or more, which over 30 years will run to $80,000 in service fees, with interest.  Huge trap, big cheese.   And the worse part of that trap is the fire-hose spray of poor normative cues blasting into your living room every night.

Chasing after these cheese deals distracts you from the fundamentals of your financial life.  When someone offers you a free toaster for setting up a savings account, and you start chasing free toasters, you forget about the basics of the transaction.  Is the interest rate on the savings account any good?  Why are you buying your toasters at a bank?

The third - and major - problem with this technique is that eventually, Mouse Ethan Hunt gets caught in the trap.  You can't keep disarming bombs forever, before one goes off in your face.  You may think you are Lucky Mouse - and can go steal the cheese that other mice are too stupid to get.  But all you are doing is walking into a well-baited and well-designed trap.  And traps inevitably catch their prey, over time.

About 70% fail at this, at any one given time, according to industry statistics.   Over time, I suspect the failure rate is close to 100%.  Yes, most people in America carry a balance on their credit cards, despite their "best intentions" not to do so.  Shit happens.  People are weak.  Balances don't get paid off - just one month - and it snowballs from there, at 22.5% interest, into a pretty big snowball.

Is that risk worth the free toaster?  Think about it.

Real and astute financial planning requires you balance risks and rewards - the way the major corporations do.  Faux Financial Acumen involves chasing after coupons and rebates.  And in most cases, the people playing the Faux Financial Acumen game end up missing the big picture and end up screwed, big-time, and often fail to even realize it.  They will be sure to mention to you their free toaster and show it off with pride!

If you are going to take a risk, there has to be a commensurate reward.  And in most cases, these "deals" offered to consumers don't pass the risk/reward test.  Is it worth risking bankruptcy to get frequent flyer miles?  It sounds like a silly question, but if you look at the track record of most consumers, you realize that most folks who sign on for these credit card deals eventually get into a credit card debt problem later in life which is made intractable by high interest rates.

And once you get stuck with a high interest rate card, and get behind on the payments, it is very hard to "roll over" that debt into a lower card, as your credit rating is shot.   And moreover, they usually charge a hefty fee of 4% or more do to this.

It is as logical an argument as the folks who took out toxic ARM mortgages and then said, "Well, I'll just refinance if the rates go up!"   But since they couldn't afford the 30-year-fixed rates anyway, they can't afford to refinance, particularly once the house is underwater and their credit rating is shot due to late payments.

So, how do you best balance the risk and rewards in these deals?  The simplest and easiest way is to just walk away from all of them.   Yes, you will be tempted to say, "Well, Bob, maybe one of these deals ain't so bad!"  But chances are, that ain't the case.  And exposing yourself to so much risk and wasting your time trying to comb through them, is just not worth it.

You are better off walking away from all the free cheese and to not look back or think about the one possible good deal you are missing.  Because likely, it wasn't such a big deal.  And you are better off concentrating your energies on being really financially astute, as opposed to the pretend-kind.

Stay out of the Casino, and you are guaranteed to never, ever lose.  You can't just "gamble a little bit" - it never works out well in the end.

Realize that these baited traps are not really "deals" in the first place - just promotional come-ons.  And that is the "deal" right there.  If you want to be astute financially, you have to recognize the difference between real financial acumen and consumerism.  Trying to "spend smart" or spend-your-way-to-wealth is not being a "smart consumer" - it is merely being a consumer.  You are not "saving" by spending, despite what the coupon or Bogo says.

Getting out of that mindset is so important to getting ahead.  Because if you keep looking for financial redemption in the coupons and offers, you will never find it.
Newer Post Older Post Home