The Goose that Laid the Golden Eggs 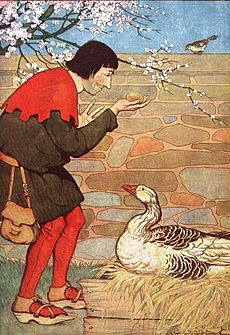 Once upon a time, there was a goose who laid golden eggs....

Once upon a time there was a boy who had a goose.  Every day, he would wake up and go out to the barn to fetch a goose egg, to make his breakfast omelet.  One day, he went out to the barn, and lo, to his surprise, the goose had laid an egg of pure gold!

At first, he was a bit chagrined by this, as he was hungry for his morning omelet, and an egg of solid gold would do him no good for that.  He was not a terribly bright boy, and in school, he tended to get "goose eggs" as well, on most of his tests.

But then he read in the paper that the price of gold was going through the roof, and he thought, "Gee, this goose that lays golden eggs is a pretty good deal!"

So he did what any smart boy would do, and that was to incorporate GooseEggCo, LLC as a Subchapter-S Corporation and then go out to seek investors.  After all, if his goose would lay a golden egg every day, then 100 geese would lay 100 golden eggs every day - maybe more!

But alas, the goose laid only one golden egg a day, and the other geese he bought laid plain old eggs. And with all the people he hired to run GooseEggCo, the one golden egg was barely covering his expenses.

But the word about the golden eggs had gotten out, and the boy found himself wildly popular in the financial media.  "A new genius of the Goose Age!" one commentator noted.  And his opinions on every aspect of modern Goose life were sought.  After all, he was the boy with the goose that laid golden eggs.  Hollywood even made a movie of his life - dramatically showing the day when he discovered the first golden egg.  It was a pretty boring movie, even with several re-writes and a lot of re-takes.  But people went to watch it, fascinated by the thought of having a goose that laid golden eggs.

GooseEggCo was attracting a lot of attention, but not making any money for the boy.  And he worried that his goose would stop laying golden eggs, just as quickly as it had started.  But needless to say, everyone was interested in GooseEggCo, and clamored to "get in on the deal!"

One day, one of his shareholders in GooseEggCo, LLC, whose money had financed the initial expansion of the company, came to the boy and said, "Boy, have you ever thought about taking GooseEggCo public?"

And the boy was stumped.  "What would be the point of that?  The goose is not laying more golden eggs, and in fact, lately, they appear to be smaller and smaller.  She laid one yesterday that was hollow!  And try as we might, the other geese keep laying regular old eggs!"

And the shareholder, who formerly was a Highwayman, who robbed travelers in the forest, took pity on the boy, and explained how things worked to him.  "My boy, the money isn't in the goose or in the eggs!  It is in exploiting other people's perception of the value of the goose and eggs!"

The boy was excited, "Tell me more!" he said, because frankly, he was up to his ears in goose shit and tired of geese in general.

"Well, we offer a small part of the company for sale - say 5-10% - and then sell that stock to the public.  They bid the stock up very, very high, because they are excited about the goose and the golden eggs, and then when the stock is at its peak - we sell ours!"

The boy thought about this and said, "Well, that sounds fine.  But are people really dumb enough to bid up the price of the stock that high?  After all, all we have is one goose and one golden egg a day.   It is not worth all that much, is it?"

"Well, first we prime the pump for a few months," the Highwayman continued, "We tell people about our great plans to expand to 1,000 geese and 10,000 eggs a day!"

"They don't know that," the Highwayman continued, smiling.

"But isn't that illegal?" the boy replied.

The Highwayman laughed and laughed at the boy's naivete and now understood why the boy did so poorly in school.

"We can say these are our plans," the Highway man explained patiently, "but we don't have to say whether or not we think they will really work."

"But what about profits?" the boy asked, "We've barely been breaking even, lately!"

"Leave that to me and my band of rogue accountants!" the Highwayman snapped, "We can show eight quarters of increasing profits at the stroke of a pen!"

And so, the Boy and the Highwayman took GooseEggCo public, and the townspeople all crowded around the square, eager to buy a piece of the goose the laid golden eggs from the local merchants, who handed out stock certificates as fast as they came off the printing press.  The townspeople were eager to buy as they had already lost money on similar ventures in the past - gambling on similar stocks, their houses, or even gold itself.   Each time, they lost money, and each time they thought for sure that this next company would be "it".

And with GooseEggCo, how could they go wrong?  After all, it is not every day that a goose lays golden eggs!

So they all bought the stock of GooseEggCo and the price went through the roof and everyone was happy - certain that the high stock price was a sign of value and profit and indeed "proof" they had made a good investment.  The boy and the Highwayman sold their shares and took their sacks of gold coins and ran off into the forest, never to be seen again.

Meanwhile, the townspeople started to get nervous.  Where were all the golden eggs?  Where was the return on their investment?  Some of the townspeople became worried and sold their stocks at a loss.  The others chastised them for selling out and bringing down the stock price.  "You have to have faith the goose and the golden eggs!" they cried.

But soon, other townspeople started to sell, and before long the price of GooseEggCo stock was hammered.   Incensed, the townspeople gathered their pitchforks and torches and marched on the corporate headquarters of GooseEggCo, in the old castle on the outside of town.

But alas, when they got there, and broke the door down, all they found were some empty cubicles, and few sick and dying geese.  "Where is the goose that laid the golden eggs?" they cried.  And they searched high and low and finally found her, in a special nest in the North tower of the castle.

The goose was old and tired, and when they searched her nest, all they found were a few small, brittle eggs and some ragged gold nuggets.  Laying golden eggs had taken a lot out of the goose, and, let's face it, geese don't live forever.  As the townspeople watched, the goose sighed, gave out its last breath, and expired.

And the townspeople were livid.  They tried cutting open the goose, convinced the secret of the golden eggs was inside.  But all they found was goose guts, like in any other goose.

So then they stormed the town square and camped out there.  "We won't leave until we get our money back!" they chanted.  But the merchants who had sold them the stock in GooseEggCo had no money to give them - or at least not enough to pay them all back.  "We just sell the stock!" they cried, "You decided to buy it!"

With great pomp and circumstance, the King arrived and was seated on his throne.  And the leader of the townspeople pulled out a scroll and proceeded to read aloud all of their grievances against the Boy, the Highwayman, GooseEggCo, and of course the Merchants who sold them stock in GooseEggCo.

The King listened patiently to their grievances and then sat in contemplation for some time.  The townspeople held their breath.  Perhaps now, they would see justice!  After all, the King was wise and fair!

The King finally spoke.  "It seems to me," he said, slowly, "that you people are to blame for your own problems.   Rather than work in the fields and toil and save, you choose instead to take what little you have and risk it all on various ill-conceived ventures, convinced you will strike it rich.  And each time, you lose it all, and each time, you latch onto the next scheme that comes around."

The townspeople were deathly silent.  They didn't know what to make of all this.

"And in the meantime," the King continued, "I have had to hire immigrant laborers to plow the fields and harvest the crops and do all the jobs that you people were supposed to be doing!"

"So I have made my decision," the King shouted, "Off with their heads!"

And the townspeople cheered, because they thought the King was talking about the Boy and the Highwayman or the Merchants, or perhaps the immigrants.