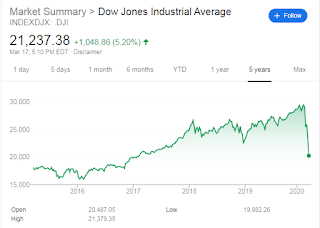 Long-term trends in stock prices are often driven by market fundamentals.   But what causes short-term price variations and trends?  Usually it is the retail investors who are driven more by emotions than logic.  The more retail investors that are in the market, the less stable it is.

Recently, I was looking at my investments, and I charted the growth over the last two decades.  And if you look at the chart, well, one wonders what all the fuss is about in the economy.  Overall, over time, the long-term trend is an increasing amount.   Now, granted, in part this is due to the fact that over time, I have added more to my investments (See, Choosing to Save is more important than How You Invest).  But even in recent years, where my savings has declined, investments are increasing in value.   And about half the value of my investments is in gains, not just in contributions. 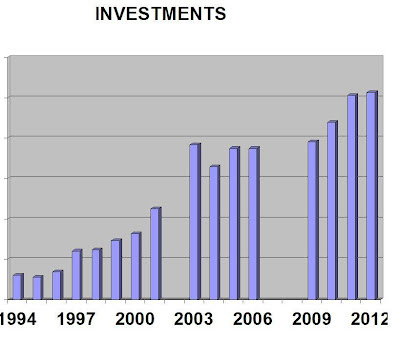 If you filter out all the smoke and noise of the day-to-day market fluctuations, month to month fluctuations, and even major dips, such as in 2009, the overall trends are far different than you might be lead to believe by the "Bad News is Good News For Ratings!" News Team At Six.    ]Note:  Data for 2008 is missing as I was too depressed back then to even calculate it!  But sometimes it is best not to look over the abyss but to just keep your head down and move along.

So why do stock prices fluctuate?  Even in a single day, they go up and down.  Even within an hour, they vary by pennies or dollars.  Nothing else in our economy changes prices like that.  They might change the price of gas once a day, but not once an hour.  The price of vegetables doesn't change between the time you put them in your cart and take them to the checkout.  Why stocks, and not anything else?

In Electrical Engineering, this phenomenon may be referred to the Signal-to-Noise ratio or SNR.  In any system, there is an underlying signal, and then there may be noise which is generated within the system just due to random physical effects.  Trying to analyze noise is like trying to see images in the "snow" on a blank TV screen (back in the days when TV screens displayed snow, when no signal was present, today, they display "NO SIGNAL" in block letters).

For younger viewers, this is what 'snow' on a TV screen looked like.  It featured prominently in a movie called Poltergeist, as I recall.  Some stoners would watch this for hours, convinced there was an actual show going on.


Who generates this noise, and why?  Well, it is usually random events, and oftentimes, it is us, the small investor, who cause it.  For example, Joe Retiree decides to buy a new car.  His 1995 Buick is pretty well trashed.  So he decided to get a newer car, and to do so, he will cash in some investments.  He decides to sell $20,000 of stock of ACME Corporation.

Joe's decision to sell ACME is no rendering of judgement of ACME, its dividends, its performance, its stock value, its products, management, or whatever.   Nor is it a judgement of the market or market valuation, or the economy - or anything.  Joe just needs to cash-in some stocks, and he picked ACME, maybe because in fact it has done well or because he owned enough of it to buy his car.

So, maybe the price of ACME stock goes down an infinitesimal amount, as Joe dumps his shares.  People make all sorts of decisions like this, every day, for reasons that have nothing to do with market price of a stock.  Heirs cash in the stocks of a decedent, in order to settle an estate.  People over age 70 are required to cash in a part of their 401(k) every year, by law - or need the money to buy food and pay bills (that is, after all, the point of a 401(k)).

So, within a single day, prices of a stock may fluctuate considerably, as shares are bought and sold, and the minor imbalances in supply and demand generate large swings in price.  These swings mean little - they are just noise.

Signal, on the other hand, is when people buy or sell based on some valuation of the stock - a judgement that the company is doing well or is undervalued, and that the stock is a good "buy" - or conversely is heading for trouble and now is a good time to sell.  And Signal, in any sense, is based on this simple definition - a conscious judgment of the stock value as a motivation to buy or sell the stock.

Now, this is where it gets tricky.  Just because a stock price swings based on Signal, and not merely background noise, does not mean the stock price valuation is, in fact, sound or rational.  As noted in a previous posting, control systems do have a hysteresis and tend to swing, like a thermostat, between extremes, making corrections.  And some systems, if they are unstable or overly-sensitive, can swing wildly in response to inputs.

What makes a stock-price system unstable?  People like you and me.  We make emotional decisions when we should be making rational ones.

Institutional investors and experts in the market spend their entire lives evaluating companies, their balance sheets, their products, their market segments, the management, long and short term trends, and the like.   Often, they make sound judgments about companies, after a long period of careful and rational analysis.  These are NOT the people who shout "BUY" or "SELL" on the financial channels or ask you for a subscription fee so you can listen to the wisdom of a man in a clown suit - those are just entertainers for the masses of unwashed.

Usually, the judgments of institutional investors and experts is not far off the mark.  Using rational criteria for their decisions, they tend to make rational and conservative choices.  Usually, anyway.

But small investors?  You and me?  We are the "last man in" - the ones buying stock after it is popularized on television and in the papers.  We buy in after the train has left the station.   We see Apple stock go up, so we buy it - after it has gone up.  And that causes it to go up more, so we congratulate ourselves on making a "smart investment".  And then we compound the error by keeping the stock because rather than take a profit and sell it, we are convinced it will keep going up indefinitely and why sell a winner?

Small investors amplify the signal created by institutional investors.   They also amplify noise, such as nonsense touted by shouting people on the TeeVee.  As a result, they tend to distort markets over time and cause short-term disruptions in markets.

The first chart above illustrates how the DOW tanked in early 2009.  During those dark days, many stocks went into the toilet, but only for a brief period of time.  Within months, many recovered - some with a vengeance, such as my AVIS stock, which went up 1500% from 74 cents a share to over $12 a share.

What happened in March of 2009?  Many were scared by the thought of a Black President.  Many others started to realize that the recession that started in the waning days of the Bush Presidency was going to be worse than expected, and that the bailout was going to be costly.   And then companies like GM, Chrysler, and Lehman Brothers went belly-up.  Banks looked poised to close.  People panicked.  And once the sell-off started, well, it snowballed quickly.  PEOPLE were driving the drop in prices, based on FEAR.  Most companies did not magically become worthless overnight, but rather, the perception of their value changed overnight.

People who had cash and BOUGHT during that period made out well.   I only wished I had more cash and bought more.  I had only $750 to spend, and it turned into $10,000 within a few months.

Within two years, the market came roaring back, and in April 2011, things were looking sweet indeed.  But then a "budget crises" in the US was manufactured by Republicans in the summer of 2011, as they hoped to make hay for the elections by scaring people about debt.  (And you should think carefully about people who are willing to trash our economy as a ploy to get elected.  Do they really have your best interests at heart?)  And people got scared, and they sold their stocks.  And the market reacted and tanked again, but within a few months, came roaring back, yet again.

(By the way, the "Budget Debt Crises" is scheduled to recur before the election in the fall, as the agreement reached merely punted the deal forward until just before the election.  Expect more shenanigans and standoffs and "my way or the highway" type posturing.  You don't get your candidate elected if things are going well.  And some folks are willing to destroy a village in order to "save" it.  That is fine and dandy, unless you are a villager.  The reality, there is no debt crises or budget crises.  It is all pretty much made-up theatrical bullshit for political gain.)

But what about long-term trends?  Well, over time, trends don't appear to be so volatile.  When you are in a 17-foot boat in 20-foot seas, things seem pretty scary.   But from 10,000 feet up, in an airplane, the water looks smooth as glass.


So what does this all mean?  Well, this is what I take away from it:

1.  Don't even bother to monitor the Dow or your investments on a daily basis.  Prices change over time and you should be investing for the long-haul, not for the next 20 minutes.

2.  Long-term, you will do well with investments, if you choose to save and DIVERSIFY so that one bad choice will not destroy your savings.

3. Trying to time the market, day-trade, spot trends, or make money in the margins by predicting which way stocks will go, is little more than gambling.  Small investors do not have the sophistication to do this, so just don't.

4.  The closer you get to retirement, the less you should be in volatile investments.  While, over time, investments will go up in value, in the short-term, you can be screwed, if you need to retire on that money.  A 70-year-old has no business in stocks at all, in my opinion, or having many of them.  Use your age as a ratio - by age 70 you should be 70% in safe harbors.

5.  Don't PANIC when stocks go down in value.  They will, and they always do, over time.  But most will go up - if you chose to invest wisely and didn't just buy whatever trendy stock the financial channels touted.