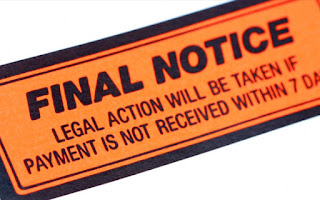 Should you pay debts you don't owe?  Sounds stupid, but people do it, all the time!
In the mail today, a letter from a supposed debt-collection agency, ANFI, claiming I owe $181.59 for a DirectTV bill.
If you read this blog, you know that I don't watch TeeVee and moreover, have never had DirectTV.  I loathe television.
What is going on here?  A fishing expedition, to be sure.  If you Google these folks, you get all sorts of complaints from people who received similar "bills" (which appear to be computer form letters) for services they never used.
Surprisingly, many folks actually pay these bills.   It is hard to fathom why anyone would pay a bill that they never incurred.  Once you go down that road, you might as well hand them all your money.
The narrative seems to be that people are paranoid about their "Credit Score" and some folks have this vague uneasy feeling that, Gee, maybe they DID forget to pay a bill?
Still others actually are deadbeat on other bills and thus assume this one is legitimate.
So they pay them.
But the deal is, if it ain't your bill, you are not obligated to pay it.  And moreover, if you do make a payment on it, you may be affirming the debt.
Debt collection agencies are barred from collecting debts on anything over five years old, in most States.  However, if they present you with an expired debt, and you make a partial payment on it, it resets the clock, so to speak, and now the debt is current.
What is annoying about these agencies is that they don't answer the phone when you call them, and then they put the impetus on YOU to WRITE to them, which is just stupid.  The burden is on the debt collector to prove the debt, not on the alleged debtor to dispute it.
I called the collection agency and they never answered the phone.   I called DirecTV and they did show that a balance was due for $181.59 but for a different Robert Bell - at a different address in Brunswick, not on Jekyll Island.
They in turn referred me to the DirecTV fraud department, where once again, I was put on hold.  I got through to the fraud guy and he asked for the last four of my Social Security number.  "That's not the number we have!" he says.
No shit, Sherlock!
But it illustrates a problem with these sorts of people.  They assume you owe the money and are trying to duck out on it.  So this guy just assumed I was the "Robert Bell" who walked away from his DirecTV bill and was making up some story.
He suggests I CALL the collections agency to "Straighten it out" and I tell them they never answer the phone, but instead leave you on musical hold.  He gives me a different number.    I call that, musical hold again.
Should I write a letter disputing the charge?  This is where it gets weird.  Why should I have to spend an hour of my day dicking around with this - as well as 44 cents postage?  They made a mistake, not me.  Why should I have to fix their error?
It is an interesting conundrum, and yet another reason why reform to the "Fair Credit Reporting Act" that President Obama is proposing, is long overdue and why we need reform of the Fair Debt Collection Practices Act as well.
Debt collectors are notorious for harassing and calling people, at all hours of the day, and again, they don't listen to your explanation that "Hey, you have the wrong guy".  They just keep hammering and harassing.  And sometimes, people pay bills they don't actually owe, just to make them go away.
Since they don't have my Social Security number (but the other fellows) they cannot ding my credit rating.  And I doubt they could even sue me in court (and it would be a huge mistake for them to try).
Part of me says to write a letter or to try to call them.  The other part says, "If I call them or write them, they will just keep harassing me for this other fellow's debt."
Part of me says I should sue THEM for harassment and violation of the Fair Debt Collection Practices Act.
In the end, I decided to write a letter and explain that they are looking for a different person.  We'll see how that pans out.  I suspect it will just throw gasoline on the fire.
UPDATE:  I wrote a letter on my firm letterhead, explaining they had the wrong Robert Bell and also invoking the Fair Debt Collection Practices Act.  They called and admitted they made an error.   It was probably unnecessary on my part, but the last thing I needed was these yahoos putting erroneous information on my credit report.
Newer Post Older Post Home