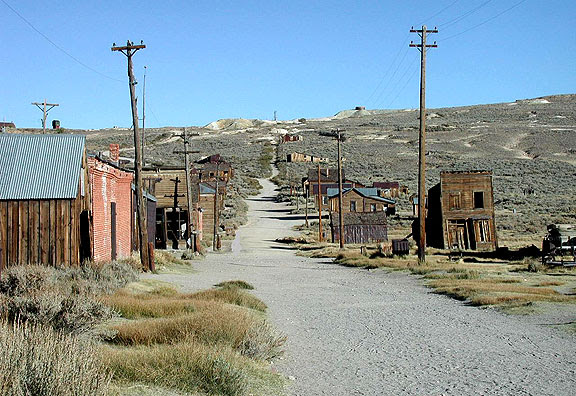 Should you buy a home in a boom town?  Probably not.


In the 1800's a lot of mining towns were founded out West, where gold was discovered and people moved in rapidly.  Very quickly, stores, saloons, and houses were put up, often commanding staggering prices.  And just as quickly, they were abandoned, once the mines gave out.  Today, many are picturesque "ghost towns" and are often tourist attractions.

Is this just a phenomenon of the 1800's?  Surely that sort of thing cannot happen in the modern world, right?

Wrong.  It still continued to happen, over the years, and it is poised to happen again today.

My Brother once wrote an article for the Colorado Rocky Mountain News, about Parachute Colorado.  A similar article appears here.  Back in the late 1970's Jimmy Carter, in an effort to stem the energy crises (remember even and odd gas days - you could only buy gas every other day - it was rationed!) had the Department of Energy develop an Oil-Shale Project in Parachute, Colorado.

In an eerie precursor to today's oil-shale and oil-sands project, the Parachute project drilled a number of holes into a mountain of oil-filled shale, fractured the rocks (early "fracking" at work) and then basically set it on fire - creating a huge underground reactor that would yield oil from the shale.  Or at least that is how I remembered it.

Ronald Reagan ran on a platform of ridiculing government works, and the oil-shale project was one particularly in his sights.  As soon as he was elected, he canned the project, and everyone was laid off.

What happened to Parachute?  Well, during the boom times, when everyone was hiring there, people bought houses or invested in the town.  Once the project was cancelled, many just walked away from mortgages and obligations.  There was no way these properties would be worth what they paid for them - not for decades.

Boom towns exist - even today.  This is not a 19th Century phenomenon.

Today in the news, Elko Nevada is making headlines as one place in the country where there is a housing shortage - because of the boom business in gold mining.

And we are hearing similar stories in Montana and North Dakota - as oil boom towns spring up overnight.  Wages are going through the roof, as are housing prices, to both rent and buy.

One story recounts how folks are living in RVs in the Wal Mart Parking lot.  The narrative of the story is how awful this is.  I disagree.  Those are the smart folks.

Why?  Because all booms go bust, eventually.  Once the oil is discovered, the number of workers needed to maintain an oil field will go down.  And prices will stabilize as our old nemesis, Supply and Demand kicks in, and housing prices drop.

And in the gold mining towns, things can go very badly in a very big hurry if gold drops in price - further than it already has.  If Gold goes down to $800 an ounce, mines will close and people will be laid off - and entire towns will disappear off the map.  Far-fetched?  It happened to mining towns in the 1800's.  It can happen today.

And what would $80-a-barrel oil do to these oil boom towns?  Or even lower prices?  Sounds far-fetched today, but it has happened in the past - with regularity.  The laws of supply and demand dictate that prices are not within our control.  Sure, the long-term trend is toward higher and higher oil prices. But short-term?  You could see a decade of price declines - and that could be enough to sink the mortgage on your overpriced house in Boom Town USA (or Canada - for all you oil sands fans).

Just remember, we started this Century under $20 a barrel, and during the Clinton years (those were the days!) it went as low as $10.  Ouch!  That was not so long ago, was it?

And with each piece of good news for the economy - unemployment going down, housing bust recovering, manufacturing hiring increasing, world debt crises being resolved - the price of gold will get hammered, quietly, a little bit at a time.  And perhaps the price of oil as well.

Should you move to a boom town for a high-paying job?  Sure, if you need a job.  But BANK that money and don't fall for the notion that somehow a boom town is a permanent thing.  Once the price of oil - or gold - drops, mines and oil fields close in a hurry.  Think hard before plunking down money and borrowing more to BUY a house in a Boom Town.

The temptation is strong, after all, you will hear stories about people "doubling their money overnight" in local Real Estate.  But that is akin to buying a stock after it has gone up - the train has left the station, and you were not on board.  And the guy who "doubled his money?"  - well, he doesn't sell, for fear he won't be able to find a place to live, so he hangs on - and loses it all again, and then some, when the boom turns to bust.

Cycles like this occur in our economy all the time - and the recent Real Estate bubble (and current gold bubble) are cases in point.  Boom Towns merely amplify these cycles.  The big players in our economy are smart enough not to get their wienie caught in the wringer during these boom-and-bust cycles.  However they are also smart enough to make money from them, by being the folks who sell you those houses, or gold, or oil, or whatever.

If you look at the history of Boom Towns - such as the Gold Rush of 1849 - you realize that the folks who made the money were not the workers or miners who struggled to eke out a living in the mud, but rather the suppliers and purveyors who sold them goods at inflated prices.  Levi Strauss made his money selling blue jeans, not digging for gold.  And many a dynastic fortune was made during that era - but not by the people in the mines, but by the people selling them shovels and food.

Who gets stung by these Boom-and-Bust cycles?  Little people - folks who get their normative cues from the media and their clueless friends.  Folks who think, "Everyone else is making money in the stock market!  I'd better get in on this Facebook IPO!  Everyone is making money in minerals, I'd better buy Silver and Gold!"  But rarely do they make money.  Most of the time they get wiped out and then are too ashamed to admit it, thinking that it was "their fault" that they got stung, and not that they were manipulated by a mass-media who lies to them on a regular basis.

Little people get run over, on a regular basis.  And - God love 'em - they get right back up and jump into the "next big thing" without ever learning from their past mistakes.

And that right there is the simple secret to success in America - just don't be manipulated and just don't listen to what the mass-media is saying or what the great mass of humanity is saying.  If you can look at things coldly and logically - and not let your opinions be swayed by peer pressure - you can come out ahead.