Live Off the Interest? Not Likely! 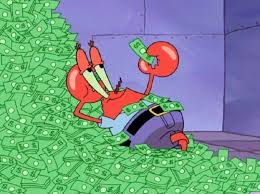 One fantasy that people have is that you can save up money and just live off the earnings or interest and 'never touch the principal' - but this is just a fantasy for most people.


You've heard the expression before - "never touch your principal" and by that, I don't mean not fondling the man in charge of your local high school.

And you've heard people talk about the fantasy of "living off the interest" of their investments.  But this rarely happens.

Why is this?  Because it is a fantasy, after all.  For most people, we will never in our lives accumulate enough money to do this.  And even when interest rates rise, living off the income from your investments is tricky.

Why is this?  Let's explore.

I recently logged onto my Treasury Direct account.  I have only a few thousand dollars in this account, as the return on investment on savings bonds and treasury bills is, well, pathetic.  The maximum interest I get on a savings bond today is 3.7% for a bond I bought back in 2005.  My T-bill cranks out a whopping 2%, which is good for a 5-year bill (compared to today's rates).  Interest rates for "safe" investments like his will always be low, and today, they are almost non-existent.

And when interest rates rise, so does inflation.  And thus, you might think you are making more money if rates go to 5% or so, but since inflation is higher, you are really just staying in place - if not falling behind.

Suppose rates went to 5%  - which would be among the highest they've ever been - you would still only get $5000 a year out of your hundred-grand investment.

OK, so you put in a Million bucks!  Now you are talking $50,000 return on investment. Not bad - the median income in the USA these days.  Add Social Security and you could live on that.  But that does not take into account inflation, and of course, interest rates are nowhere near 5% these days.

Oh, and one other little problem.   You ain't got a million bucks.  Few people do.  About 3% in fact.

Yea, that problem.  An entire generation is lurching toward retirement with little or nothing in the bank.  How much?  It is hard to tell, as a lot of surveys rely on self-reporting of data, which is never accurate.  And of course, people with defined benefit pensions may not have a lot in savings - and don't need it, either, if they have a secure pension to rely on.  But for the most part, average retirement savings look pretty pathetic, across the board, with most people crowing about having a couple hundred thousand dollars in the bank, if that.

But what about higher-yield investments?  Yes, you can make more money - potentially an unlimited amount, by investing in riskier things.   But the emphasis here is on the word "riskier" - which means although you might make 10% or even 20% on your investment, you might also make -100% and end up broke.  It is just a risk we can't take.

The best approach is to diversify your portfolio, to balance risk and return, and go more conservative over time.

And then, when you retire, spend your money - including the principle.  Using the 4% rule or other technique, you have to dip into your savings, over time, in order to withdraw enough income to live on.  But it's OK, because you DIE in the end, and you won't need the money in the next world.

Even if you could get a lot of money AND get a good guaranteed rate of return in a safe investment, there is one more bugaboo that clogs up the works of the "live off the interest" gambit - inflation.  Inflation decreases your buying power every year.  So if you spend the interest, say, on a million dollars, then every year, your effective buying power decreases, unless your interest rate keeps up with inflation.

The only way around this, of course, is to spend LESS than the interest, and keep investing so that your nest egg gets bigger and bigger.   That way, your income will rise over time to keep pace with inflation.   But of course, that means you need an even bigger nest egg to keep up with this scheme, as you might be able to spend, say, only half the interest.   So, now you need $2 Million instead of a measly $1 Million.

And you ain't even got the $1 Million, am I right?

This article, on CNN, sums it up nicely.  Gee, CNN uses to have good stuff, before it went all-celebrity-gossip and breathless reporting on the Facebook IPO.  What happened to CNN financial reporting?  Oh, well.
So what does this mean?

1.  The whole idea of 'living off the interest' and 'never touch your principal' are cute phrases but are irrelevant for most of us, or indeed, all of us.

2.  Spending your principal in retirement is OK - why leave an inheritance, anyway?  Besides, in order to get Medicaide, you will have to show you spent it all, so don't sweat it.

3.  Your retirement income will consist mostly of the money you SAVED, not money you earn from interest while in retirement.   So, the more you save, the better off you will be.  Trying to conjure strategies to make money from your money is a largely pointless exercise.  You got what you saved, that's about it.  Spend it.

4.  Interest DOES have one positive effect - it compounds over your working life and adds to your savings, potentially doubling or tripling them, over time.  But you have to save, and save early on, and not panic and make stupid decisions.  Once you retire, though, interest is not a big part of the picture.

So, once you are ready to retire, spend the money - in a planned and orderly manner.   Spend as little as you need, of course.   But attempting to "live off the interest" likely won't work out, in the long-term.  So don't feel too guilty, if you have to tap into the principal.  It will likely happen.
UPDATE April 2014:   One aspect of this fantasy stems from "Old Money" tales like that of Louis Auchincloss, who wrote about the old monied families of New York City.  The idea was, that a family could exist for generations by living off the interest alone, while their Principal increased over time.

However, as I noted in Death of Dynastic Wealth, simple mathematics makes this impossible.  If you have two children, your Principal will be divided in half when you die, giving them each less than half to live on.   Their children, half of that.  And so on.   Pretty soon, even Carnegies and Mellons go broke - even without inheritance taxes taking their toll.

The other problem with this model, for middle-class Americans is that if you become incapacitated in your old age, you will have to spend all your money on nursing home care, before Medicaid will kick in.   So you protect your Principal, and a big nursing home company thanks you for that.

Spend the money in an orderly way such that it will last you until you die.  As one reader noted, if you can spend the last penny with your last breath, you've optimized your life experience.

And leaving money for heirs?   They likely won't appreciate it - and instead of going out and making their own way, they will simply wait around for you to die.  It saps them of the will to live and the motivation to go out and do things.   But it does allow you to play the sick game of trying to get them to curry favor with you, right?
Newer Post Older Post Home