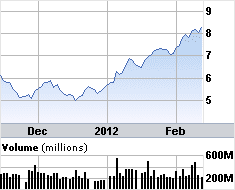 Is BOA poised to make a comeback?

Bank of America is hammered a lot in the news, and it is a popular sport to bash the bank.  Losers who bounce checks go on websites and complain, "They charged me a bounced check fee!" as if it was something unique to BoA.

But if you are solvent, they are an excellent bank, in terms of service and the ubiquitousness of their branches and ATMs.  No matter where you are in the States, chances are a BoA ATM is within 20 miles, and you can withdraw cash or make a deposit without incurring roaming fees.

And that is the bank's strength in the long-term.

And by the way, BoA charges no fees for a checking account so long as you transfer $25 to savings every month - and you can set that up automatically using billpay.  And you can take the money right back out again.  Pretty sweet deal.   And bill pay?  Why pay for stamps when BoA will pay for them for you?  I don't get people who write checks and lick stamps - not in this day and age.

Now a lot of other people like to bash the bank because they bought Countrywide Mortgage, and Countrywide got itself in a lot of trouble and nearly brought down BoA.  But this is akin to blaming Dow Chemical for the Bhophl disaster, when that was Union Carbide that did that.  Dow merely bought Union Carbide years later, and now is saddled with the legacy of that bad deed.

So blaming Bank of America for the deeds of Countrywide is sort of silly.   Moreover, all Countrywide did was what every other lender was doing - lending money to people who shouldn't have been borrowing in the first place.

And this is where Americans are schizophrenic.  If banks refuse your loan because you are a bad risk, people complain they are being "mean" to them and "unfair".  If the banks loan money to everyone, regardless of risk, and bring down the economy, they are chastised for being "reckless".

Pick one, you can't have both.

Today, banks are back to lending money in strict terms, and not surprisingly, people are whining that the banks are being "mean" and "unfair" in not allowing them to refinance their upside-down house at 3.9% even though their credit rating is in the trash.

Again, pick one, you can't have both.  Responsible lending or reckless lending?

And here's the deal - given the fallout of reckless lending, expect lenders to be pretty tight with credit requirements in the coming years.

But all that aside, the recent settlement with the States Attorney Generals regarding the so-called "robo-signing controversy" should put a lot that unknown risk to bed.   And some borrowers may be allowed to refinance (if the government will grant the banks waivers from new strict lending requirements) and even modest mortgage balance adjustments (which is only fair to people like me who cut their losses and paid off their mortgages and learned to live on less, right?  No, it ain't and I'm pissed, yes).

And no, no one got tossed out of their house over "robo-signing" who wasn't in fact in default.  No one.  So what that was all about is utter bullshit - people nitpicking at details and not seeing the bigger picture - that 1/3 of the country is upside-down on mortgages and a staggering number are in default and insolvent, and that the best thing to do is foreclose, sell the home and start over.

Unless you want to reward people - in a very arbitrary and inconsistent manner - for being radically irresponsible.

That seems to be what people want to do, alas.

But the Real Estate Market will recover, over time.  The Countrywide losses will be written off, and slowly the bank will claw its way back from the abyss.

If I sold my BoA stock back in December and took a huge loss, what would have I bought?  Well, let's see, what's a good bank stock that is severely undervalued and poised to make a comeback in 2012?

Yes, that's right, BoA.  Unless you feel a company is going bankrupt (like GM did) and you are going to lose your whole investment, selling out makes no sense.  You'd just be buying right back in.  But I don't think BoA is going to go bankrupt, at least not soon.  And my stake in it is small enough that I can take that risk.

Other stocks, I am not so sure.   I got out of alternative energies, as they are all starting to fold in a wave of bankruptcies.  Solar panels are fine and all, but they are cheaper from China.  LEDs are the wave of the future, but made in America?  Not competitive.    Alternative fuels are drowning in a sea of oil sands oil - and even at today's high oil prices are still not competitive.

The only downside to BoA is the huge amount of brick and mortar it owns - major bank buildings in nearly every town and city.  As more and more banking goes online (and BoA is very good at online banking, by the way) virtual banking may be the wave of the future.   And like licking stamps, the few people who "like to talk to a live person" are dwindling fast.

I prefer an ATM or banking online as it doesn't make mistakes and put my money in the wrong account.  I don't have to wait in line, and they are open 24 hours a day.  Who goes INTO banks anymore, other than to rob them?  (And the answer is, generally, poor people.  Look around the next time you are in a bank.  Rich folks ain't in there!).

So the only downside I see to BoA is their staggering amount of Real Estate - and many of their office buildings are half-empty already.

But the underlying banking business is robust, and if they can shake off the Countrywide problem, I think they can manage a turnaround.

Update on the Bank Everyone Loves to Hate:

Earnings forecasts for the next few years are as follows:

2011 was a bad year, as they lost 90 cents a share in the second quarter, giving them a scary trailing P/E of 1814.90 which of course gets larger as the share price goes up.

But looking forward, with the stock trading at about $8.50 a share and projected earnings of 70 cents a share for 2012, the P/E drops to a more attractive 12 which works out to a return on investment of about 8%.

Of course, a lot of this hinges on BOA working its way through the mortgage mess and continuing to see profits from current banking operations.  A move toward virtual banking could catch them unawares, and with a lot of brick-and-mortar real estate on the books.

But overall, I am bullish on the company.  The service is good and they are everywhere.
Newer Post Older Post Home