Why are Coupon-Clippers Poor? (What's the Name of Your Yacht?) 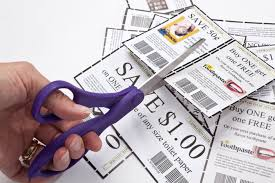 Coupon clipping is a popular sport - among the poor.
Why do people never seem to get ahead using this technique?


Couponing is all the rage these days, with the TeeVee shows promoting the practice and showing Rednecks buying grocery carts of food and paying nothing for it.  Grocery carts of food, by the way, are one of those high-index Pavlovian Response things that hooks you emotionally - like the aluminum suitcase full of hundred dollar bills in those action movies.  Damn, look at all that money!  Damn,   look at all that food!  And FREE, too!

A lot of folks think the secret to success is in spending, not in saving.  And they will use coupons for everything.  And while not all couponing is bad, couponing is a technique that marketers use to encourage consumption and get you to spend more.

For example, the local fast-food restaurant sends out coupons for food items.  I had not planned to go there (the food is bad for you, and believe it or not, in this day and age, they put trans-fats in the biscuits!  This is Georgia, not New York!).  But hey, a coupon!  Such a deal!  I should go there!

But examining the coupon reveals that it is encouraging consumption.  The deal offered is for a large meal with a free milkshake-like thing, which I don't really want.  If you look at their regular-price menu, you can find a small chicken wrap and a side salad for $3, which is not only a better deal, is better for you.  Spending $4.99 for a jumbo burger, fries, and a shake is not necessarily a better deal, just more consumption.

Coupons are a trap, like credit cards baited with cash-back and free miles.  They are enticing, as they sell the idea of FREE, and everyone likes FREE, right?  But as we discussed, Free isn't.

No, the major Corporations of the world haven't all checked their brains at the hat stand and gone off the deep end and decided to give things away for FREE because they like you or "as a promotion".  And yea, people really believe that is the case.  But alas, it ain't so.  When something is doled out as "FREE" or discounted, usually there is a catch - and the catch is often behavioral-based, not necessarily part of the deal.

When you get that coupon for the fast-food place, they still make money.  And they hope you come back and buy again - at regular prices.  They use the coupon as bait, to get you to consume.  The grocery store offers coupons to get you into the store.  And once in the store, they hope you spend a lot of money.  Like a Casino, the Great American Grocery Store is designed to entice you and then fleece you.  And since the folks running the place know a lot more about psychology than you do, they win, nearly every time.

And many of these coupons are for packaged and produced foods made in factories, that are expensive to buy and are bad for you.  Or they are for brand-name products that, even with a coupon, are often more expensive than store brand.

But what about those couponing shows, where those stringy-haired trailer-park girls walk out with five grocery carts of food and pay only $5?  Well, they are stunts.  Getting such coupons on a regular basis and finding a store that offers to double coupons, is hard to do.  Yes, once in a while, the moons align, and you can get a "free" deal or a huge discount.  And if you can take a number of those kind of deals and tack them together, you can put on a good show for the television.  And news reporters have been showcasing this sort of thing since the 1970's, during slow news days.  Today, they make entire shows out of it.

The gimmick on "extreme" couponing is that in order to get a lot of these coupons, you have to spend money.   When I buy dog food, the food comes with a coupon for $3 off the next purchase.  If I could "stack" several of these and get a double-coupon bonus with the item on sale, yes, I could get a "free" bag of dog food - but only after buying four bags to get the coupons.  It is just a gimmick.

But the bottom line, for me is this.  If couponing and scheming is such a great deal, then what is the name of your Yacht?

You heard me right.  If you could really walk out of a grocery store with $500 of food, for free, every day, then you would be a very rich person, in short order, right?  And you'd have a Yacht, like Sooze Orman has.  Her yacht is named "Approved!" - what's the name of yours?

Don't have one?  I thought so.  Most couponers don't.  In fact, they rarely own the trailer they live in.

Why doesn't couponing work?  And when I say it doesn't work, what I mean is, why doesn't it, over time, make the couponer more wealthy?  Yes, in specific cases, you save a penny or a buck here and there, and other times get a free can of soup.  But overall, the couponers remain poor.  Why is this?

Again, the Casino Effect is at work.

You probably know a gambler who likes to go to Casinos.  And they tell you, all the time, about their big scores and how much money they won at slots or blackjack, or poker, or whatever.  But for some reason, they never get wealthy this way.  Why is this?

Well, because they lose a lot of money, too.  But they never tell you about this, of course.  In their minds, they focus on the big payout, and not on the actual costs.

Consumers in general think this way - talking about the great discount they got on their brand-new car, but failing to realize that the vehicle depreciated by three times that amount in the first month of ownership.  They got such a great deal!  And yet, the car is worth less, on the open market, than they paid.

It is human nature, I guess, to crow about our triumphs and then not think about our failures.

Now, I know what you are going to say.  "Well, rich people don't need to coupon, as they have lots of money!"  And that would be inaccurate.  Rich people are some of the cheapest people I know, and that is one reason they became rich.  So, if there was a "deal" in couponing, they would be all over it.  Moreover, if there really was a way to get $500 of food for nothing at the grocery store, they'd be doing it - and selling the food and then making millions of dollars and tooling around in their Yacht.

But funny thing, no one is making a mint at couponing - or even making a living at it.  If this was such a lucrative deal, wouldn't it be profitable?  I mean, if you can walk out of a store with free or severely discounted foods, wouldn't you be able to just live off that income?

And yea, once in a while, someone does figure out how to beat the system, such as the famous pudding guy.  But he ain't rich by a long shot, is he?   He got some free airplane rides, is about all, and cashing in frequent flyer miles is anything but fun.  Some restrictions apply as they like to say.  And while couponers like to talk about that story (like the way gamblers like to talk about the big score) no one else seems to be able to score deals like this.

And by the way, the Casinos love to tout a winner.  It keeps the suckers gambling.

If you buy a product on a regular basis and see a coupon for it, by all means use it.  If your grocery store has some promotion for free gas, and you shop there anyway, then take the free gas.  But never, ever think you are coming out "ahead" in the deal, or that the free gas was actually free.  It wasn't.  You paid for it.

If you want to make a hobby of extreme couponing, well, that is your bag.  But look around online on the couponing websites and ask yourself why all the folks on there are so middle-class and lower-middle-class.  If this was such a great deal, why aren't they all fabulously wealthy?  Why don't they all have Yachts?

And the simple answer is:  You can't consume your way to wealth, you cannot spend your way to riches.  You cannot eat your way to slimness, either.  And funny thing, the people who coupon are often the same folks who are trying to eat their way slim.

And the next time someone regales you with how much they won at the Casino, or how much they saved in coupons, just ask them this simple question:  "So, what's the name of your Yacht?"
Newer Post Older Post Home