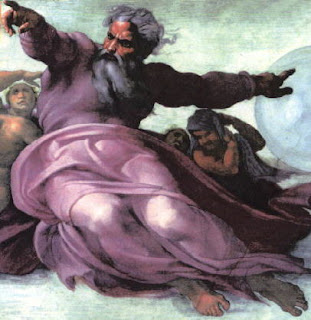 God's a-watchin' !  Or not.
In a recent posting about the tricks the middle-class plays to hide assets from Medicaid, I mentioned, offhand, that morally, of course, it is wrong to ask for government assistance, when in fact you have assets to pay for your long-term care.
And this is true, no matter how you slice it.  And whether or not you or I do it, either.  And let's face it, we all do things along this line, in our lives.  Some of us are just up-front about it.  Others play pious about it and make rationalizations (e.g., "everyone else is doing it!")
But government welfare (or any other incentive) does produce weird reactions in the market.  The decision matrix for the average middle-class elderly American is this:

1.  Save money, live frugally, pay for your own long-term care, until you are broke, then have the government go after your estate (your house, mostly) for the balance, once you are dead.  Pay for those who didn't save, through your tax dollars. (least optimal outcome)

2.  Give away your money during your lifetime to your kids, or squander it on yachts and cars and end up broke, and then have Medicaid pay for it all.  Have other people's tax dollars pay for your care. (maximum optimal outcome for you).

3.  Shield your assets through trusts or other mechanisms (life estates, etc), so you can transfer wealth to you children while still having medicaid pay for your long-term care.  Other people's tax dollars pay for your care.  (Not as optimal as #2, but better for you than #1).

As you can see, the idea of providing a safety net so that Seniors are not left to die by the side of the road, has unintended consequences.   And the only way to avoid these unintended consequences is to intrude into your personal life.
For example, some of the strategies used to "shield" assets from Medicaid can backfire, as if, for example, you give away your house to your kids, you may be denied Medicaid coverage for up to five years.  Or, they may go back and examine transactions and deem them to be sham transactions for the purpose of defrauding Medicare.  And when you die, Medicare presents a bill to your estate.
Suddenly, the government's nose is "in your business" in a big way - when you go after these incentives.

And the distinction between "shielding" assets from Medicaid and "squandering" them is pretty difficult to discern.  If I give away all my money to my kids (which, thankfully, I don't have) during my life, how is this different than giving them all my money the day before I go into an assisted living center?  Medicaid says the former is OK, while the latter is a No-No.  If you see the difference, illuminate me.
Student loans and Pell Grants are another interesting area, where you have to plead poverty to get money.  One student, aged 18 and living with his parents, is viewed in terms of his parent's income - even though he has reached the age of majority.  Another student, age 22, living by himself and working, has a far different profile, even if his parents are billionaires.  It is a rather arbitrary system.

(Note that if you, or a parent, were in the Iraq war or in Afghanistan, you may get the max Pell grant, period.  Something to look into.  $5500 doesn't buy back a lost limb, or a lost parent, though).
As I noted in response to an earlier posting, I bought my first house at age 22 using a mortgage I obtained through the Farmer's Home Administration. Not FHA, but FmHA.  It was originally a program designed to help farmers buy homes, but had morphed into a mortgage program for anyone in a "rural area" - whatever that means (another arbitrary criteria).
It was a program that subsidized interest payments and then "recaptured" the interest when you sold the house. When I sold my house, they recaptured all the subsidy from the profit of the sale.  So, in terms of cost to the government, at least some of that was recaptured (although as guarantor of the note, perhaps not all costs, including their office overhead).However, if the mortgage was paid off, there was no interest recapture.  If I was clever, I suppose I could have rented the place out when I moved, used the rents to pay off the mortgage, and then pocketed the profits from the sale.  I was not that clever.  Others were, and used the system to buy homes, rent them out, and then pay them off at a reduced interest rate.  Thanks, Uncle Sam, for the free house!
Of course, that would be illegal, but people did it, nevertheless.  Just as shielding assets from Medicare could be deemed illegal, in some circumstances.Every year, they would send me a form to fill out, to determine my subsidy level.  At first I received a small subsidy, making my mortgage payment a staggering $218 a month.  Then, as I made more money, the subsidy subsided and I paid the full amount - $240 a month (this was a long time ago!).
I decided to go back to school full-time and quit my job.  As a result, my income shrank to nothing, and my mortgage went to $80 a month - all of which was principle.  It did help me afford to go back to school, so maybe the program was a good thing.  I don't know.  All I know is, they offered an incentive, and I took it.
But when filling out my annual income form - to determine my annual subsidy, if any - they asked for information about all of my expenses. One line on the form was a howler:"Recreation expenses (Cigarettes, Bowling, etc.).....$__.______"This told me volumes about how they perceived their borrowers - as rednecks who chain-smoked and spent all their money on new bowling shoes.I didn't smoke and rarely bowled. I put down "beer" in that category.  Got a good subsidy that year, too!
Of course, when talking with the people at the FmHA office, I realized that they had standardized criteria for each category - and even suggested a number for "Cigarettes, Bowling, etc." for me to use.   After all, most poor folks don't have a clue on what they spend on stuff like that.
But here, the government is really getting in your face, isn't it?  Wanting to know your daily budget for bowling and cigarettes (and even suggesting a number to use!).
It is odd.
What would have happened if this subsidized mortgage was not available?  I wonder sometimes.  A number of outcomes are possible.


1.  Houses would be cheaper, as available cash would be lower, depressing prices.

2.   More people would rent, and thus landlords would make more money, and people would be less empowered through home ownership.

3.  Other borrowing options would materialize, as banks realized the risks of home  mortgages was offset by the fact that they are secured by collateral, not the U.S. Government.  And if foreclosure wasn't such a hassle in places like New York State, banks would be more willing to lend without government guarantees.

All three are possible.  You could argue that the laws we have in place which make it so expensive and difficult to foreclose are one reason why banks shy away from any home mortgage that is not "guaranteed" by the Federal Government.


And this guarantee is one reason why they are so quick to want to foreclose these days.  The sooner they boot out the borrower, the sooner they get their Gub-ment guarantee money.

The reason, at age 22, I had to use this FmHA mortgage was that no other mortgage was available to me.  Because of "Good Intentions", New York State passed laws making it take up to three years to foreclose on a property.  Banks were not necessarily eager to lend.  And borrowers had broad rights in bankruptcy, to allow them to stay in a home even longer, and get out of paying the full amount.

So, getting mortgage was hard, as the government had decided that, to be "fair" to the little people, we needed to hobble banks.  So banks stopped lending.
So to fix that, the government started mortgage programs and guaranteeing loans.  They got their nose into both sides of the home mortgage business.
A mortgage on a home is a very safe and secured loan, even in the event housing prices decline.  With sufficient down payment, any home is a 100% safe bet for a bank - in a normal Real Estate market.  Few banks lend this way, anymore.  Why bother? Fannie Mae and Freddie Mac have your back - and you can loan to anyone, and not worry about it.
Or take student loans.  We guarantee those, so kids have access to tens of thousands of dollars in loan money.  So, colleges and universities raise tuition accordingly - until some university degrees literally makes no sense from a cost/benefit analysis.  Great intentions (everyone has the opportunity to go to college!) but unintended consequences (kids graduate with a mortgage on their very lives!).

I am not sure I have an answer here, only that we need to think about where we are going with this kind of stuff.  For many Americans, life is all about filling out government forms and waiting for subsidies - and figuring out how much you spend on "Bowling and Cigarettes."
And to some extent, this forces all of us to "play the system" for all we can get, rather than trying to create wealth and increase productivity.  Why bother, when someone else will pay for it?
You end up chasing after tax deductions, tax credits, government subsidies, tax incentives, grants, and loans, rather than, well, doing what you'd rather be doing.  How much of our behavior would change if we were incentivized to do nothing - but instead had to rely on our own incentives?  I think that is the question the Libertarians are asking.  And it is an interesting question.
Yes, all these government programs have "good intentions" at heart.  But good intentions often go awry - as we are quickly finding out.
Newer Post Older Post Home