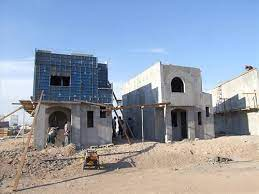 Until fairly recently, home mortgages were hard to obtain in Mexico.  As a result, homes often took years to build, as homeowners had to construct them, slowly, over time.
About a decade ago, we decided to drive our motorhome to Mexico, and spend nearly a month there.  The experience was so stressful, I was never able to complete our journal of the trip.  Things have changed in Mexico since then, and while we did go back to Zihuatanejo, I haven't been back since, other than a brief stop in Cozumel on a cruise.
Cruises suck, by the way.  Save your money and just fly somewhere - unless you think being trapped in the Marriott in Wilkes-Barre Pennsylvania for a week is fun.
Of course, a lot has changed in Mexico in a decade.  Back in 2002, the only criminals you had to fear were the Police.  Today, the Police are outgunned by drug gangs, who mostly kill each other, but occasionally kidnap tourists.  It is a very sad state of affairs for a country with so much promise.
But getting back to our story, what intrigued me at the time was the fact that so many homes in Mexico seemed to be in a state of half-completion. The Mexican economy was just recovering from some really stupid moves - the government had decided to devalue the peso in 1994, basically wrecking the economy.  Things were just starting to recover in 2002, and Citibank was bravely opening branches there - one of the few banks competing against the State bank.   Bear in mind that the Party Revolution International (PRI) that had been running Mexico for 70 years (!) was basically a Communist party. Communist in the sense of "Let's give all the money to our friends" - like most Communist countries. So a very few prospered and everyone else struggled.  Communism sucks.
But the Mexican people are hard-working and used to struggle and deprivation.   And I think that is why overweight, lazy, fatuous tea-partiers hate them - they are constantly being shown up by folks who will give 8 hours of work for 8 hours of pay.  As opposed to say, 1 hour of work, four hours of whining and 3 hours of "breaks" - that you get from your average 'murrican.
But getting back to our story (I digress yet once again) the banking situation in Mexico was chaotic.  And long-term mortgages were almost unheard of.  So Pedro would bring a cinder block home from work, mix up a small batch of cement, go up on the roof, and cement it in place, before settling down to supper.  In 10 years or so, maybe he would have a second story on his house.   Meanwhile, you saw houses with re-bar sticking out, usually with coke bottles on the ends, to keep them from rusting (or keep people from poking their eyes out!).
Today, you can get a mortgage in Mexico, and many immigrants here are working to pay off that mortgage, so that when they retire, they can move back to Mexico (where they have free health care and a lower cost of living) and have a paid-for house.  In the meantime, their family has a place to live.  This is a harsh life to live - being away from your family for 10, 20, or 30 years.  And yet I know a lot of Mexicans who do just that, to put food on the table for their family.  And yet so many Americans hate them.  I don't get it.  If anything, they deserve our sympathy and support.  After all, we do have it so well.  And they do work so cheap.  Who the hell else is going to mow your damn lawn?  Not an American.
But I digress, yet once again.
When there is no credit, people have to pay cash, and prices are kept artificially low as a result - or people have to resort to oddball finance techniques or strategies.  For example, in 1979, when mortgage rates went to 14% - making homes unaffordable - many people signed "land contracts" with sellers, where they would make payments, over time, but not own the home until the last payment was made. Many people ended up losing the home over these, as if they missed a payment, they got tossed out, with no equity whatsoever.   Others got purchase money mortgages, once rates declined, and bought out the contracts.
You also see this in the used car business.  If you buy a used car that is, say, over five years old, it is harder to get bank financing for it.  Shady used car dealers may be able to get you financing at high interest rates.  But a car being sold by an individual?  He has to hope someone with CASH comes along. And this is why an older car, with relatively low miles, can be a good deal - if bought from an individual seller.  The market pool of buyers - cash buyers - is very small.  Demand is low, so prices drop.  Even if you could get financing, rates are higher on older cars - which again dampens prices as it raises monthly payment proportionally.
And that is one reason cars depreciate so rapidly in the first five years of ownership.   Financing is readily available at low rates for new and late-model used cars.  As a result, prices are higher.  Why?  At least three reasons:

2.  The incremental monthly increase in payments on a loan seems trivial, even when the price goes up a lot.

3.  Changing the terms of a loan can often offset apparent price increases, making something seem more affordable than it is.