The Myth of Market Cap 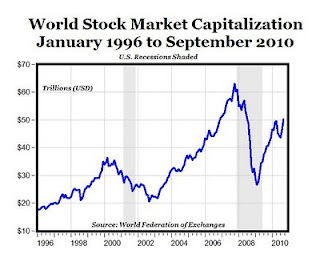 Market Capitalization.  What does it mean?  Absolutely Nothing.  Say it Again!

Finance pages like to tout "Market Cap" numbers a lot, as if they mean something.  Every time you read a financial page, just remember, the guy writing the article went to Journalism School, and chances are, doesn't know a heck of a lot - perhaps less than you do.  He might be able to drink you under the table, however.

What is "Market Cap" anyway?  It is a fake number.  It is calculated by taking the total number of shares of the company and then multiplying it by the latest share price.  Usually this ends up being a staggeringly large number.  But it is meaningless.   Why?

1. It does not reflect the value of the company:  The liquidation value of the company will be pennies on the dollar, in most cases.  And even if you take a profit approach (the P/E ratio) often the ratio is so high that it does not justify the share price.  If a company has a P/E ratio of 100, that means it is returning 1% return on the price of a share - a pretty piss-poor rate of return.

2.  It does not reflect how much money the company raised selling stock:  During the heyday of the dot com era, I worked for a large, odious law firm (for six months, I escaped) that specialized in VC funding and IPOs.  I could never understand why a company would offer an IPO say, at $15 a share to inside investors, who would turn around and sell it at $30 a share within minutes.  Wasn't the company leaving money on the table here?

And the answer is, of course they were.  IPOs are designed to allow founders to cash out.  They sell off a fraction of the company for cheap, watch the share price spike, and then dump their shares.  This is one reason why a lot of IPOs skyrocket in price, and then tank - they do so by design.  The founders sell out at "skyrocket" and you buy it, and ride it all the way down to "tank".

So the company never got even a small fraction of its vaunted "Market Cap" in real Capitalization.  Say, for example, our ubiquitous XYZ company does an IPO, valuing the company at one million dollars.  They sell 5% of company - 5,000 shares, for $10 a share.  Who owns the other 95% of the shares?  The charismatic founder, some VC capitalists who invested early, some people who agreed to work cheap and be paid in stock - and maybe a smaller company they bought out in return for stock.

The IPO drops - the banking firm underwriting the IPO sells the "subscribed" shares to its friends at $10 a share.  They put them right on the market and the little investors bid them up to $20 a share.  After all, they've been reading about XYZ company for months now!  It was on the TeeVee!  Everyone was talking about it!  It must be a good deal to get in on!

A good deal - just like South Florida Real Estate circa 2007 - and the TeeVee hyped that, too.  People never learn.

The price spikes to $20 a share and the original owners start selling their shares and the price drops back down again.  The little investor gets screwed, the powers-that-be make out.  The friends of the underwriter double their money in a day, and the founders of the company find themselves very wealthy, indeed.

And this is why protesting Wall Street is sort of stupid.  Small investors buy this crap and no one is putting a gun to their head to do it.   Personal Responsibility - and not getting greedy - are the key.

They didn't do the IPO to raise capital.  They did it to cash out.  Never forget that!

3.  It only reflects the "Last Guy In" price:  When you multiply the number of shares by the share price, all you are doing is multiplying by the price the "Last Guy In" (usually the small investor) paid.  This not only is misleading, the resulting number is irrelevant.

If you really want to calculate the "Market Cap" of the company - its real worth - you'd have to calculate what everyone actually paid for their shares and total it all up.

The "Market Cap" approach takes the price that some Joe Blowad paid for the stock ($20 a share) and multiplies it times everyone's shares which yields $2 Million.  But there is no two million dollars anywhere - not laying around in the Scrooge McDuck Money Vault - not anywhere.   The company is not "worth" two million dollars.  Not even worth one, perhaps.

No matter how you slice it, Market Cap really means little or nothing.

4.  It does not reflect what the company would sell for or what insiders could cash out for:  Once in a while, if a company is very undervalued, another company or VC firm will come along and say to the shareholders, "Hey, I'll buy your company, for the share price, plus a premium!" - and people sell out.  Once in a while.

But in most other cases, the Market Cap is far higher than the sale price of the company.  For example, if you were to start selling off shares of, say, Microsoft, on the open market, would you net the full value for your shares?  Suppose you were Bill Gates and had umpteen billion shares of MS stock?  The moment you flood the market with the shares, the share price goes down, as the law of supply-and-demand kicks in, and the number of buyers is far smaller than the number of shares for sale.

(To say nothing of what the market would say if the founder started dumping his stock!).

So, for example, Joe Fernwood, who owns 47.5% of XYZ stock decides to sell it all when it peaks at $20 a share.  The market tumbles as a huge number of shares hit the market.  Quickly, the share price drops from $20, to $15, to $10 and then perhaps even to $8 or $5 a share.  There are not enough people out there who want XYZ stock to meet demand.  And as the share price tumbles, some folks panic-sell their shares, convinced it is all going to hell in a handbasket.  And as the share price drops further and further, fewer and fewer people want to buy it, until someone realizes it is undervalued.

Fernwood could cash out better if he sold a trickle of shares at a time.  And this is one reason why a lot of start-ups have clauses that prevent insiders from selling shares too soon after an IPO or selling too fast.  We don't, after all, want to spoil all the fun!  Let the share price rise, so Joe Stupid Dumb Small Investor, who listens to shouting guy on TeeVee, buys more of the stock!

5. Market Cap jumps all over the place with stock price:  The chart above illustrates how market cap can change, for example, during the recent downturn.  The media loves to report this number, as it is dramatic.  "The Market Capitalization of QRT company dropped by by million dollars"! they say, when what they mean is the share price dropped by 1%.  For a very large company, even small changes in share price project to huge dollar amounts of "market cap" changes - which are meaningless.

Let's take QRT company as an example,   It has a hundred million shares outstanding at $10 a share - or a "Market Cap" of a Billion dollars.  The stock price drops by 10% to $9 a share.  This is concerning to be sure, but for the market journalist, not very sexy when selling a story to the public.  And they want to sell you a story, so you watch and buy the things that they advertise.  So instead of saying "QTR shares drop a dollar" which sounds pretty tame, or even "QRT shares drop 10%" which does sound more concerning, they say "QRT Market Cap drops by a Hundred Million Dollars!" which really sounds alarming.

But what is happening at QRT company?  With all that money gone, how will they survive?  Well there was no money to begin with.  It is like these people who had phantom gains on their mini-mansions and then cry that they "lost $500,000 in equity" when in fact their house is the same value as it was when they bought it.

Only here, "Market Cap" is even more removed from the day-to-day operations of the company.  In fact, it really has no impact, unless the company plans on selling more stock.  But the bank accounts of the company are the same, the profit margins may be the same, nothing really has changed.  No one has lost a million dollars - not even the shareholders, as most of them probably paid less than $9 a share for QRT.

So why does the financial media hype Market Cap?  Because it sounds cool and grabs your attention.  Big numbers are like eye-candy.  And it deceives you into thinking something is worth more than it is.

For example, the Facebook IPO is touting the Market Cap as being somewhere between $75 Billion and $100 Billion.  But as we shall see, the company is raising far less than that in terms of Capital from the stock sale.   And if you count the contributions of the founders and the early buyers of the stock, well, the actual "value" of the company is far less.  Even if every shareholder of Facebook sold their shares, they would not realize $100 Billion.  And it is doubtful that Microsoft or anyone else would offer to buy out the company for that amount.

If you calculate the value of the company from a liquidation approach, it might be worth $5 Billion.  If you use a profit analysis, maybe $20 Billion.  But $100 Billion?  Not likely.  And yet, when they sell the stock, people will undoubtedly buy it, as the hype is so strong, and yes, people are irrational and will buy things on brand name alone (Mea Cupla!).

And when the smoke clears, and the share price spikes,  economics journalists will gleefully report that Facebook "has a Market Cap of X Billion Dollars!"