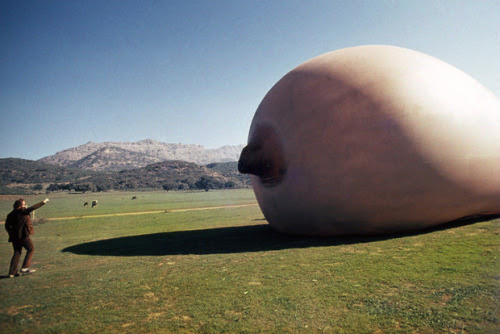 Woody Allen battles a giant breast in 'Everything You Always Wanted to Know About Sex, But Were Afraid to Ask'.  The Breast Cancer industry has taken on similar epic proportions.


Organizations, as I noted before, tend to take on a life of their own.  While they may be started to do good deeds and help people out, they end up going into self-preservation mode rather quickly, and pretty soon, the people running them become more concerned about politics - or preserving their own high salaries and perks - than with the original mission.

The people at NPR are less concerned with "public radio" (which it isn't) that with selling syndicated shows, taking in lots of corporate sponsorships, and paying themselves millions of dollars in salaries. The folks at United Way, at one point, got more than a little distracted with stretch limousines, high salaries, and abuse of power.  And they also found themselves embroiled in controversy, as organizations as diverse as Planned Parenthood and Catholic Charities were suckling from the same charity teat - or at least adjacent ones.

Breast cancer is an interesting phenomena, in that it sort of became an epidemic, starting in the 1970's and peaked a few years back, and then inexplicably started to decline.  People who cannot fathom the difference between correlation and causation said stupid things like, "Well, with all the increased awareness and testing, no wonder cancer rates have dropped!"

But that is like saying if you monitor the speed on the freeways, the number of speeders will decline. Until you start handing out tickets, nothing much will change.  Screening for breast cancer cannot bring down the cancer rates (and indeed will, in the short term, increase the number of detected cancers) it will only detect the cancers earlier, which may help in treatment, but not in prevention.

And the cancer industry is strangely silent on why the rate of breast cancer increased dramatically in the 1970's and then has been declining by about 2% per year since 1995.  (Note that the link is to "breastcancer.org" which is not the pink ribbon people, but has a similar logo.  Likelihood of confusion?  It is an industry!)

From 1999 to 2005, breast cancer incidence rates in the U.S. decreased by about 2% per year. The decrease was seen only in women aged 50 and older. One theory is that this decrease was partially due to the reduced use of hormone replacement therapy (HRT) by women after the results of a large study called the Women’s Health Initiative were published in 2002. These results suggested a connection between HRT and increased breast cancer risk.

That is an interesting comment to me, as my Sister, who died from Breast Cancer, was put on HRT after being diagnosed with the disease, having a mastectomy, and after struggling with it for many, many years.   But how does a study published in 2002 cut the rate of Breast Cancer starting in 1995?  An interesting question.

My sister also took the very early form of the Birth Control Pill (in 1968) which some have linked to an aggressive form of Breast Cancer.  This is not an astounding claim.  If you watch the documentary "the Pill" (link above) you will note that in the early 1960's, when the first birth control pills came out (which are little more than hormone pills) Breast Cancer rates soared among users.  They lowered the dosage, said "problem fixed" and everyone forgot about it.  But what about long-term use of the pill?  Or long latency periods for cancers to form?  It is an interesting question, and one that people are only starting to ask.  And the rise and fall of Breast Cancer rates could be tied to this.  But more studies would be needed to see whether this is correlation or causation.

Whatever the reason, cancer rates are dropping dramatically, and no one really seems to be much interested in figuring out why.  We race for the cure, when it seems that something is happening - a cure, if you will - that is being ignored.

Thus, the "search for the cure" may be more of a search for prevention.  And the decline in breast cancer rates in the last decade has more to do with changes in behavior, environment, or some other factor, than with any treatments, detection, or whatever.

The largest Breast Cancer group is the Komen group - the people with the pink ribbons that sponsor races for the cure and license their pink ribbons to all sorts of retailers and manufacturers.  They are the 600lb Gorilla of Breast Cancer, and every year, they license their ribbon to a number of products, to "raise awareness" and of course, money.  And recently, they were in the news for a little tiff that got started with Planned Parenthood.  Komen claims it is a change in policy toward funding.  Others suggest that the founders of Komen - who have ties to prominent Republicans - were pressured by fundamentalist Christian groups to sever ties with Planned Parenthood.

The group has also be criticized for supporting a treatment drug that some say is ineffective, and also supporting more Breast Cancer screening that some think is necessary.   Again, screening detects cancer - it does not reduce or eliminate it.

Whatever the reason, it is clear that these sort of organizations, as they grow to epic proportions, end up taking on a life of their own - and end up getting into all sorts of controversies.

Most folks, of course, don't have the time or energy to "vet" a charity or organization.  Are you against cancer?  Well, sure.  It's like saying you're against terrorism.  Who the heck is for it?  There is no "Pro-Cancer" group out there.  But when you send off your check to an organization, it may be to pay for things you never intended - or perhaps are counter to your own personal interests, beliefs, or even the cause they claim to represent.

And before you volunteer for an organization, make sure it isn't going to devolve into some nightmare power struggle and bitter infighting.

UPDATE October 2014:  The Komen Group has come under more scrutiny as only about 20% of the money it raises goes toward actual "research" while the lion's share (40%) goes toward "public education".   It is not clear what "public education" comprises.  Some charities have been known to call fundraising activities (handing out pamphlets and asking for money) as "educational" activities, even though they are really more directed toward fundraising.   It is not clear whether this is what the Komen Group is calling "education".   Are there really people out there today who don't know about breast cancer at this point?    The other criticism is that the CEO of the Komen group (who got into hot water over the Planned Parenthood tiff) makes over a half-million dollars a year as head of the group.