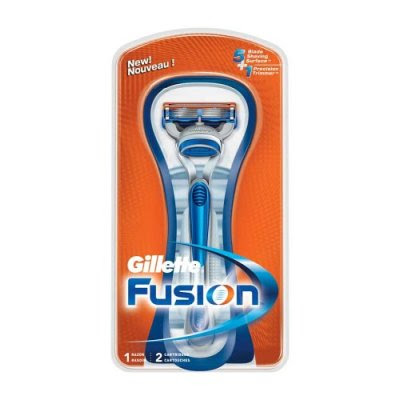 Why are razor blades so staggeringly expensive?


I don't agree with the Taliban about much, but their beard policy is starting to make a lot more sense.  Shaving is an enormous hassle, and the cost of razor blades just makes it worse.

The other day, we are in the store and a package of replacement blades for our Gillette Mach 3 is retailing for $21.  And they package these things in a way where you have no idea how many blades are in the package - oftentimes a blank "filler box" is behind the blades, making it appear there are more in there.

$21 for some plastic injection-molded heads with three blades in them is just scandalous.  The actual cost of making these is probably along the lines of $3.

How do I know this?  Well Winn-Dixie now sells a competing product, and their blades sell for $7 for the same size package.  Even factoring in that I have to buy a new handle ($6) this is a better deal than the Gillette refill pack.  And if Winn-Dixie can sell the razors for $7, then you know that $21 is wildly overpriced.

Why are these so expensive and why do we pay so much for them?  Well, for starters, the product makers have Patents on the handles and designs, so they can control the market for the replacement heads, arguing that some odd feature of the attachment mechanism is proprietary, and thus prevent others from selling replacement heads that fit.  And this is why Winn-Dixie has to sell their own handle.

So, once you accept a certain type and brand, they have you locked in.  You buy the handle, you have to buy the blades.  HP gives you a free printer, knowing they will make it up on cartridge sales.  And they put a proprietary chip in the cartridge, so you can't refill it or buy a third party copy of it.   Apple sells the iPhone for below cost, knowing they make it up on app sales and fees from carriers.  They call this the subscription model, and it makes a lot of money for corporations.  But not for you.

And this is one reason we went from a single blade, to a double blade, to a triple blade to - well, a rotary lawn mower, I guess.  It is just to come up with a new Patented design that they can claim rights to.  And if you buy into this, well, you are spending a lot of dough.

Are these new designs better?  Not really.  Mutiple blades do cut better, but they also pull out and then cut facial hair in a manner than makes it snap back into the follicle, below the surface of the skin.  You look smooth-shaven, but some of these hairs, now beneath the skin surface, can grow subcutaneously and form ingrown hairs, which erupt in festering boils within a day or two.  The best a man can get?  To look like a pimply teenager?

I spent a half -hour in front of the razor display stand, examining the packaging and the pricing and promotions.  It was fascinating.  The cheapest shave out there is a single-blade disposable razor in a large bag package.  The cost-per-blade is cheapest in this format, which is no longer proprietary and thus mass-produced overseas and sold under generic or house brands.  However, if you remember what disposable razors were like, you realize that the double or triple blades are indeed, a nicer shave.

(Oddly enough, while searching on this topic, I came across the Winn-Dixie "Dollar Shave Club" which offered to ship razors to your door.  The promotion is no longer available).

The funny thing is, up until a few years ago, I never looked at the price of these things.  I just bought the cartridges for whatever razor system I had bought into (congratulating myself for being a sophisticated and smart consumer for "stepping up" to the then-new two-blade system!).  Eventually, they came out with a three-blade system, and I thought, "Well, OK, sure, if you really say it is better."

Then they came out with four blades and it was like, "OK, enough already with the blades, right?" and now they have five blades and I'm quite ready to burn their factory down at this point.  Bastards.

As you might imagine, each new razor has a new handle and a new "starter kit" you have to buy, so you end up tossing out the old handles.  You have to make a commitment to the new technology, which is good marketing for them, but not for you, the consumer.  If you decide that five blades is just a stupid waste, then you can't go back to four or three, without throwing away your "investment" in the handle, so you stick with it.  It is all based on grabbing you by the emotions.

What is the upshot of this?  Well, growing a beard sounds more and more attractive.  But also it makes me feel that Gillette is not my friend anymore, but a greedy bastard that just wants to take all my money.  And like Microsoft Windows, as soon as a viable alternative is on the horizon, I will run, not walk, toward it.  And when Gillette goes through the throes of bankruptcy, I will say, "Serves you right, you greedy bastards.  Weren't content just to make a useful product at a reasonable price, were ya?"  And when I see the Gillette CEO on the sidewalk with a cardboard sign saying "Hungry, please help!" I will take a piss right on him.  Serves him right.

But I digress.  And I don't really have any strong emotions about it, either way.

It just strikes me as yet another one of those "Hey Consumer!  FUCK YOU!" kind of deals that we are being presented with these days.  Everything, it seems, from our cars to our cell phones to our computers, are designed to be technically obsolete within a year or two, oftentimes for no other reason than to make the product an "orphan" so you have to buy anew.

But technology can last a long time.  And not much has happened in the last decade that has made a car or even a computer obsolete, completely.  And razor blades, despite the claims of technological improvement, have not really improved much since the days of the straight razor.  We have changed the packaging, mostly, and how the blades are attached.  That's about it.

And if you think about it, when you bought a straight razor and a strop to sharpen it with, your purchase was complete.  No need for replacement blades or anything of that sort.  The "safety razor" opened the door to making shaving a subscription service.  And while the blades were cheap, it was not a bad deal.  But today?  $21 for razor blades?  You have to be kidding.

And the subscription model turns you from an owner into a consumer - and it is flooding the market today.  HP sells printers based on price per sheet printed.  In the old days you bought a printer, owned the machine, and then made copies.  If you could get toner for cheap and paper for cheap, you could create copies at a low cost.  But the cost-per-page model (dictated by proprietary cartridge sales) locks you into a fixed price-per-page model.

Similarly, cars are being leased, and not sold.  You no longer are an owner of a piece of machinery, but a mere operator of it, for a specified time.  You can wash and wax and care for your car and drive it carefully, it makes no difference - the cost per mile of leasing remains the same for the car abuser as it does for the car-lover.

In the old model, you bought the car and became the proprietor of it, and how long it lasted and how much it cost per mile or per trip was something you had control over.  And you could save a lot of money this way.

This subscription model also plays into the cash-flow mentality, wherein the cost of things is viewed as a monthly payment, not the actual overall cost of the transaction.  And in this it is ironic that Winn-Dixie actually had a "Shave Club" which turned shaving into a monthly subscription service.  What's next, the monthly toothpaste club?

Owning can be empowerment*.  The people who own and run things are the people with wealth and control.  Mere operators or renters are just passive consumers who pay the most for the products and services rendered.  But more and more, our society is moving this way - taking us from creators of wealth to mere consumers of it, with no say or control over our own destinies, other than to say, "Gee, they have a new 10-blade razor, now!  I'll have to try THAT!" and lead us to believe that selecting consumer goods for purchase is, in fact, empowerment.

It is sad, to say the least.

And this is what I see when I spend a half-hour looking at razors at the grocery store.


* But not always.  Owning stuff for the sake of owning things can be a form of slavery.  But when you are locked into a subscription model, with monthly payments, just to be able to have a computer or a phone or indeed, a razor blade, you become a passive consumer.

UPDATE December 2015:  Gillette is suing the dollar shave club for Patent Infringement.
UPDATE 2022:  I learned that the Schick disposables (Xtreme 3) are the cheapest and best alternative out there, at less than a dollar a razor - which can be used for about a week before it goes dull.  You can buy them directly from Schick or even on eBay.
Schick has cut my shaving costs by more than 2/3rds.   Screw Gillette!
Newer Post Older Post Home