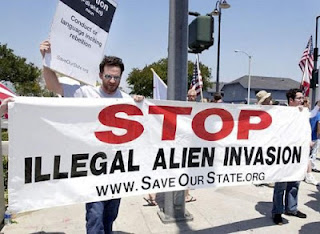 Externalizing your problems will not solve them, but it may make you feel better - in the short-term.


Externalizing.  What is it?  Why do I harp on it almost as much as poor normative cues?  Externalizing is the ultimate form of weak thinking, and while it may make a weak thinker feel better about himself, it rarely solves their problems.   It also causes more trouble in the world than anything else.

You may have heard of this phenomenon in other terms - Scapegoating for example.  And politicians are the first to use it.  Why?  It makes people feel better about themselves - they did no wrong, it was the other guy's fault!  And it is part of our human nature to do this.

So the Republican Candidate says, "You are not at fault, it is all those illegal immigrants!" and gets you to think, "Yea, they are taking away all the high-paying jobs!  Let's get rid of them!"  But of course, this is hardly the case, but it does make you feel better about yourself, right?  You did nothing wrong.  Buying that huge house on a onerous mortgage wasn't a bad idea.  Going out on strike for six years isn't the reason they closed the factory.

And hey, your economy isn't in the tank because you decided to declare war on half the world and bankrupt your own country, right?  No, it has to be the Jews.  After all, they have money!  So it must be them!  And that "answer" sold well in Germany, in 1936.  People wanted to believe it was the other guy's fault and not theirs.

Which is not to say it never is the other guy's fault.  The Treaty of Versailles was a bad deal.  But perhaps a better idea would have been to renegotiate that treaty, rather than burn down Synagogues.  But which is easier to do?

Today, we see externalizing on all levels.  People caught in the housing bust blame Freddie Mac for their woes, instead of looking at their own malfeasance.    But did Freddie Mac force them to buy a home they could not afford?  Not really.  But no one wants to address that - and take their lumps for a decision gone horribly wrong.

And by the way, buying a house is a very serious decision.  When it goes horribly wrong, it can bankrupt you for decades.   Never take on debt or make decisions involving hundreds of thousands of dollars, without thinking it through - carefully.  The cavalier attitude toward debt and home buying is what sank people during the last decade.  Myself, I never bought a home that could not be rented at a profit.  But then again, that's why I'm not crying in my soup and blaming the government.

The problem with Externalization is that it never solves your problems, and in fact, often makes them worse.

When you externalize your problems, you blame someone else for your own bad decisions.  And as a result, you forfeit any learning experience from that bad decision.

For example, Joe Consumer buys a car he cannot afford.   The monthly payments are high, the insurance is murder, and he overpaid for the car.  He has classic "buyer's remorse".  A couple of trivial things break on the car and he takes it back to the dealer.  He gets madder and madder and starts blowing things out of proportion, claiming the car is a "lemon".  He paints signs on the side of the car saying "LEMON!  LEMON!  DON'T BUY FROM MONSTER MOTORS!" and parks it outside the dealer.

But in reality, the car is no lemon.  Actually, the whole "Lemon" thing is overstated - the idea of an "unfixable" car is nonsense, unless you believe in haunted houses and fairies, too.  But people who have buyer's remorse, often channel this anger into the car itself.  They paid a lot of money and the car is not shiny and new anymore, and they want out of the deal.  They did nothing wrong - it was the dealer's fault!  It was the manufacturer's fault!

What they are failing to learn here is that buying a brand-new car is a sucker's bet - and not thinking it through carefully is a bad idea.  People buy too much car all the time and pay too much.   And they often take out their aggression on the dealer or the manufacturer.  So they learn little, and in a few years, they "trade in" and start the process over again - but with a different manufacturer or dealer this time.

Or take speeders - they blame the Police for enforcing the speed laws.  "It's just a way of collecting taxes," they say, "because everyone speeds!"

Not really.  Because these same people appear in my rear-view mirror regularly, tailgating and grousing "Why doesn't he go faster, dammit!"    And the simple reason is, I prefer to pay $15 a month to insure my car than to pay $100 a month and get speeding tickets.    As you get older, you realize that yes, some things in your life are within your control at least to some extent, and yes, you can take responsibility for your actions.

This is not to say that bad things won't happen.  But you can make decisions that will affect your life - and see results.  Just giving up and blaming fate - or unseen others - is not the answer.

Pot Smokers will bore you for hours about what a paradise-on-earth the USA will be, if they legalize marijuana.  But in many parts of the country, marijuana is de facto legal, and you can buy it a special pharmacies.   But no matter, it is not legal enough!  And until that happens, their own personal problems - often brought on by marijuana use - are pushed aside in favor of more pressing political issues.

And please, no more comments from "responsible marijuana users" who boast of having $15,000 in savings and the ability to hold a crappy job.  That is just pathetic.  Like I said before, ambition is the first thing sacrificed on the altar of the ganja.

And speaking of political issues, being a political junkie is a popular sport in America these days - on both sides of the spectrum.  All our problems would be solved, we are told, if only we would elect (fill in the blank).

This seems to be a fairly recent trend, as  I do not remember "the economy" being the big issue of the day, when I was a kid.  The economy was something that people and business was responsible for, not government - and prosperity was not something the government handed out.

But today, Republicans as well as Democrats promise to "fix the economy" or improve the economy, or increase or create jobs, or whatever.  Jobs will appear magically, we are told, even if we have no job skills or are asking for too much money for what limited skills we have.

The entire Occupy Wall Street movement is a classic example of externalizing.   While again, there may be malfeasance in Wall Street (Act shocked, this has indeed never happened in the history of the USA. No, wait...) the malfeasance of ordinary people is overlooked.   Yes, the games played with mortgage-backed securities were bad.  But people signed those mortgages which were, on their face bad deals.

I never signed a variable-rate note, or an interest-optional note, or some other funny-money deal.  Why?  Because I thought they were horrible deals and would blow up in my face.  Guess what?  I was right.  I am not genius.  A six-year-old could have seen it.  People deluded themselves and now want to blame someone else for their mistakes.   And the guy who appears to be making money seems like a good target.

Or take these kids who signed up for student loans, majored in Bong Hits and Bullshit, and now wonder why no one wants to hire them.   It is the student loan company's fault, right?  Shit, at least blame your college for giving you a crappy education, people!  But when it comes right down to it, it is the students - and their parents - who are to blame for placing this exaggerated value on a "college education" and then not doing the math on these loans and tuition costs - and not monitoring what Junior was studying or talking to him about where this was all going.

And yea, it seems unfair to blame 18-year-olds for being immature and partying their way through party-U and taking gut courses for a gut major.  But then again, when you are 18 and college-bound, you have to take this shit seriously.   If you don't?    Well, who is to blame?  And does it really do any good to the student to allow them to blame others for their own mistakes?

If they learned nothing from college, they should at least learn something from the mistake of it.

I think perhaps that some of us are the opposite way - we internalize our problems, perhaps too much. But then again, you learn so much more through introspection than you do from externalization.  It bugs me that I spent $50 too much on a hard drive last week.   I should have shopped around.  I should have tried a low-level reformat of the old hard drive, first.  But lesson learned, and if a lesson is painful, so much the better for the learning.  At least now I have two terabytes of mirrored drives.

Taking the opposite approach - blaming the retailer for high prices, for example, or blaming Microsoft for pushing a crappy operating system - does the consumer no good - even if these are true propositions.  The lesson learned is to (a) shop around and (b) jump on to the first operating system out there that supplants Windows (whoever does this will make Billions.  I wonder why no one has?).

We all make mistakes - that is a given.   You can't be perfect, in any endeavor.  The secret is to learn from your mistakes instead of pawning them off on others.  When you blame others for your misfortunes, you not only do not learn, you sentence yourself to repeating those same mistakes, over and over again!
Newer Post Older Post Home