NOTE: This is a posting I was working on a year or so ago and just got around to finishing. 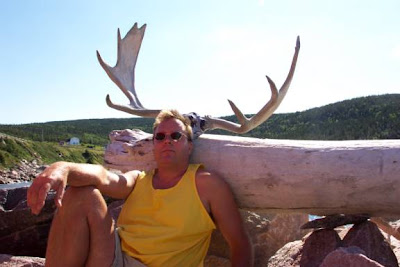 Canada, it kind of grows on you...

Traveling in Canada, I am reminded again how different and yet the same our neighbor to the North is.  We are bordered by two countries, Canada and Mexico, and they are as different as night and day.  I made the mistake, years back, of traveling to Mexico by RV, assuming it was like Spanish-speaking Canada.  Wrong.

And yet Canada is not just an annex of the US or anything like it.  In fact, Canadians have a pretty good gig, as they can claim to be "like America" when it is convenient - when the US is doing something good.  But they can also claim to be "Not like America" when we do something stupid like elect a moron as President (take your pick, based on your political prejudices) or invade small countries and kill little brown people.  So they have the best of both worlds, really, as they can be "America, Jr." as Homer Simpson tagged them, when they want to be, or be European, when it is convenient as well.

But Canada is more than just your cool cousin who smoked pot and wore his hair in a pony tail.  Canada is really a conundrum, when you think about it.  As a collection of provinces that do not always play well with each other, they seemed to be more concerned with social justice issues than with geopolitical ones.  Conservatives point to Canada as an example of "what could happen" if ObamaCare is enacted, and Liberals point to the same direction - North.  Are both right, or wrong?

To be sure, socialism is strong up here.  Medical care is handled by the government, and unless you are a tourist (unlike in the UK) you don't have to pay for medical care.  And medical care is apparently OK, but not spectacular.   Everyone has their horror stories about the Health Canada, but doesn't seem to want it to go away, either.

And things are expensive up here - nearly, but not quite twice, what they cost in the States.  Gasoline, for example, is about $5 a gallon, the price at which most Americans freak out.   But of course, Canadians smartly drive smaller cars, particularly in more rural provinces, as they have further to drive.  And food and liquor are expensive as well.   A cheap bottle of wine in the States is $5.  Here, it is $11.  Clearly not a place for hard-core alcoholics!

Of course, everyone is on the dole.  Well, not everyone, but being on the dole, as in the UK, is sort of a thing do to.  Wearing big Wellington boots, which are called "Welfare shoes" is the thing to do.  One day, many years ago in North Bay, Ontario, we stopped by the side of the road and saw Mom and Dad walk out to the mailbox in front of their trailer.  We joked that they were waiting for their dole check, and oddly enough, that is exactly what they were doing.  We saw them later in town, cashing it.  Today, I am sure this is all done electronically, like we do in the States.

North bay, of course, is famous as the hometown of the author of "For Better or Worse."  When we checked into the RV park there, we said we were staying for three days.  The folks there said, "What's the matter, did your camper break down?  No one stays here for three days!"

Despite this, we found it to be an interesting town and the experience was educational.  We met a Quebecois couple singing Country and Western songs at the park, and they sang in both French and English, as it was hard to do Patsy Cline in French.  One of the older Quebecois a the park shouted at them, "Chante en Francaise!" over and over again.  After the show, I asked the couple what that was all about (I bought their cassette, too, this was over 10 years ago) and they said that some Quebecois thought that singing in English was a political sin.  Go figure.

After looking at a Map of Quebec, however, I realized why the Quebecois are so pissed at the Ontario folks.  If you look at the map, a portion of Ontario extends Eastward into Quebec, like an erect penis.  No wonder the Quebecois don't like the Ontarians.  They feel like they've been fucked by Ontario for years.

And oddly enough, on this trip, we saw this effect even today.  Quebecois were cold, initially, until they discovered we were Americans, not Ontario folks.  They hate people from Ontario, but will tolerate Americans.  We had a similar experience in France, oddly enough, as the French hate the English more than Americans, and once they discovered we were Americans, they warmed up to us.  And after seeing the antics of English tourists, we understood why.  300 years of animosity doesn't evaporate overnight.

But the Ontarian (Or Ontarioian, depending on which click-bait site you ask) despise the Quebecois with equal vehemence.   And even in the Western provinces, we saw many locals roll their eyes when you mentioned Quebec.  It seems than only in New Brunswick, which has a foot in each camp, is there something approaching tolerance - and bilingualism.   But others have said I am wrong about that.

The point is, as cool as Canadians claim to be, they have their own set of fucked-up bullshit to deal with, just on a smaller scale.   And since they are a lesser presence on the world stage, they don't engender the same reaction from other countries, as they tend to bomb people a lot less than we do.

And while we took an utter shit on the native Americans, Indians, or indigenous peoples of our Country, as far as I know, we never kidnapped their children and sent them off to boarding schools, punishing them if they tried to speak their native tongues.   Taking a squat on indigenous cultures seems to be part of our shared British heritage.

So what's the point?  Beats me, other than it can be kind of tiresome when Canadians blather on about how much better they are than the United States, when it suits them, and then spend their winters in South Florida, or do their shopping in Buffalo.   I mean, it is a nice place to be - you can identify with America when it suits you, distance yourself when it is convenient, and of course, not have to talk about your own messy internal politics.

Maybe we should try that angle.  Canada!  It's your turn to be world superpower!  Have fun and be sure to write!   Meanwhile, we'll just sit here on the sidelines and criticize....  Hey, this is fun!  Sort of like being a teenager again.


UPDATE:  A reader informs me that we too, put Indian children in boarding schools.   The Australians did the same thing to their aboriginal people as well.   It seems like a Western thing, to want to "modernize" and Westernize other cultures - Japan (which wholeheartedly rejected it), the Middle East, and so forth.   We even continue to do this today, inviting immigrants from all over the world to study, work, and live here and become citizens, hoping they will adapt to the American Way of Life and export our cultural values overseas.  Sadly, it seems the only thing we successfully exported to the Middle East was suit-wearing dictators, and their day in the sun seems to be fading fast.
Newer Post Older Post Home