People love mythology, and one popular myth is that you can "squat" on someone else's property and end up owning it.


A reader asks, "Can I live in an abandoned cabin?" and the answer is, "Yes, until they throw you out."

If you are living on someone else's property, you are trespassing, and they can throw out off the property, using various legal means.  Yes, there is something called "squatter's rights" but in reality, in the history of the United States, few people have succeeded in obtaining ownership rights to a property by squatting on it.  In the more modern history of the USA, perhaps a handful.

Sadly, many on the Left have turned this into a political thing, encouraging people to "squat" on abandoned properties with the idea that this is some form of social justice, and then getting all bent out of shape when the property owner has their asses tossed out - legally.  You have no "right" to squat on a property - until you can obtain legal rights to live there, you are just a trespasser and trespassers have no rights.

But it is true, that you in some instances not only can you stay on an abandoned property but also end up owning it through something called adverse possession:

The doctrine of adverse possession discourages disuse of property. According to the doctrine, if property was abandoned, and someone else "squatted" on it for a number of years, the squatter could gain control over the land. If the squatter abandons the property for a period, or if the rightful owner effectively removes the squatter's access even temporarily during the statutory period, or gives his permission, the squatter loses the benefit of that possession. If that squatter later retakes possession of the property, that squatter must, in order to acquire title, remain on the property for a full statutory period after the date on which the squatter retook possession. However, one squatter may pass along continuous possession to another squatter, known as "tacking", until the adverse possession period is complete. In the United States, squatting laws vary from state to state and city to city.

The statutory period is often quite long however.  Depending on what State you are in, you may have to squat for five to thirty years, and often this also means paying the property taxes on the property and keeping up the place as well. 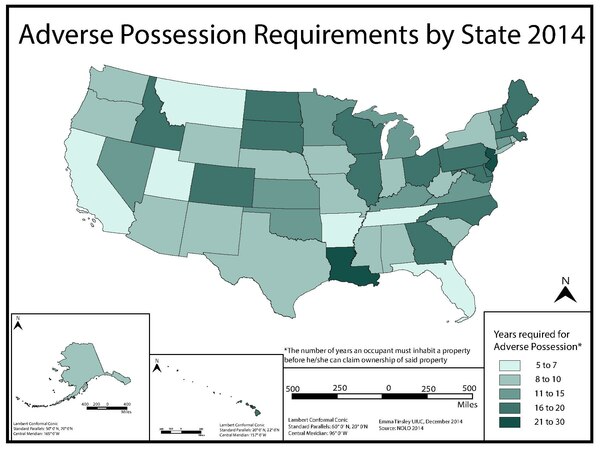 Be prepared to squat a long time, if you want to obtain possession of a property!

And if even one day before the statutory period ends, the owner shows up and tosses your ass off the property or even gives you permission to stay, the whole gig is up.   On the other hand, you had a free place to stay for a number of years, so don't complain too loudly, right?

You can't just sneak into the property, either.  You have to have "open and notorious" occupation.  The lights have to be on, you have to be home, your name has to be on the mailbox, you may even have to pay the property taxes.  The real property owner needs to know you were there, or should have known if they bothered to check, in order for your rights to accrue.   And this has to go on for a number of years, as few as five, as many as thirty.

The problem is, in this day and age, is that it is hard to "squat" for very long before someone gets wise to it and tosses your ass out.  The number of people who acquire property by adverse possession this way is very, very small.   Most cases involve land disputes (boundary disputes) where a landowner doesn't notice, for decades, that someone is occupying a portion of his land, due to poor boundary marking.  Even then, it is hard to prevail in such a case.

So what is the point of squatting?   I suppose if you are homeless, it is better than sleeping on the street.  But the problem is, of course, that some other squatter might throw your ass out, or try to co-occupy the same dwelling, making your life miserable.   You may also be cited for trespass, possibly arrested and even jailed.   Trespassing is indeed a crime.

I suppose if I was forced into such a situation, I would find a property, act like I owned it, change the locks, pay the utility bills and property taxes, and take possession.  Then, if asked to leave by the real owner, leave quietly and hope not to be arrested or charged, being happy to have a low-cost place to live for a while.  But it is not something I would recommend.  This "WikiHow" has some dubious advice about the process - bear in mind that what you are doing is in fact illegal and may end up with you being jailed or fined!

Sadly, the folks contemplating squatting usually are not that astute or smart - but likely have drug or alcohol or mental illness problems.  Most "squats" are abandoned houses or buildings that are not up-to-code nor safe or desirable places to live.  Still others subscribe to weird "tax protester" or "sovereign nation" sites and philosophies, and call attention to themselves by filing bogus "adverse possession deeds" with the county clerk's office - which often serves to alert law enforcement and gets their ass tossed out - and into jail (well, at least now they have three hots, a squat, and a cot!):


So in July 2011, after looking around, the couple found a suitable home in Granby, changed the locks and moved in. (The owner had let the property go into foreclosure and moved to Hawaii.)

This worked out fine for Bruno and Gutierrez-Vite until October 2011, when, based on further advice from their consultant, they prepared and recorded a document they called "Affidavit of Adverse Possession." The Fraser/Winter Park Police Department got wind of this document and, on Oct. 26, paid a visit to the property.

The police gave the couple a week to move out. When they didn't, the police changed the locks and posted "no trespassing" and "no occupancy" signs at the property.

Instead of moving out, the couple recorded other creative, bogus documents they thought would further their claim to a right to possess the property. Not surprisingly, their arrests followed.

At his trial, Bruno tried to defend himself by arguing that the law of adverse possession allowed him to do what he did. The trial judge quickly concluded this was nonsense and refused to allow this defense to be presented to the jury.

And quite frankly, if you are thinking along these lines, maybe it is time to sit down and assess where your life is going.   Because if living in abandoned houses seems like a viable alternative lifestyle, well, you're pretty close to hitting bottom.
Newer Post Older Post Home