A reader writes opining that perhaps new technologies, such as near-field, will cut down on shoplifting and reduce crime.   I am not so sure.  It seems each new technology might cut down on one particular kind of crime but often creates terrifying new kinds of crime that are even harder to suppress.

I wrote before about my debit card being stolen.  It was a fascinating trip down the rabbit-hole as I learned how a complex con was being put on, with my debit card being one cog in a giant wheel of deception.   And it involved the Internet, Western Union wire transfers, VoIP phone lines, and pre-paid debit cards - three of those technologies being relatively recent in nature.   The con, run out of Russia, would not have been possible in earlier days, as the criminals would have no way of reaching their victims.

The Internet, of course, has created whole new kinds of crimes - legions of them.  Everything from the basic Nigeran scam (which dates back to the days of fax machines and even letters), to Craigslist scams, to reputation blackmail, keylogging scams (to steal banking information) to ransomware, to - well whatever they've thought up this week in Russia or China, or Nigeria or wherever.   The Internet has created whole new classes of crimes that are nearly impossible to police.

Or take a simple technology like steering column locks.   In the 1960's car thefts were legion, and Congress passed legislation mandating steering column locks (something that was on the Model-A Ford!) to reduce theft and thus reduce insurance costs, which were getting out of hand.   Of course, thieves found ways around this (a simple dent-puller could remove the lock cylinder and you could start the car with a screwdriver).   So car alarms were next, and thieves found out how to disable those, or just ignored them, as people simply didn't pay attention to sirens going off in the big city.   Car disablement devices (common on BMWs) or "immobilizers" were next.  Thieves would just flat-bed the car away.

Of course, the easiest way around all of these theft-prevention devices is to simply carjack.   Put a gun in the owner's face and demand he get out of the car.   You drive away with the keys.   Of course, with car titles, it is harder to register and use such a car - or sell it.   But some thieves found that even VIN numbers could be swapped with an identical wrecked car bought at auction, as illustrated in the prologue of the 1970's movie, gone in 60 seconds.

Many thieves found that with expensive cars, it was more profitable to just "chop" them and sell the parts - and they parts were harder to trace.  Car makers put VIN numbers on fenders and doors and even window glass.   It made no difference - people would simply remove the stickers or grind off the numbers.   It is like a game of chess, one side makes a move, and the other a counter-move.

And yes, car theft is way down today.   But still people steal cars and drive them to Mexico to sell, and kids still joy-ride if they can either find and older car with an easier to defeat ignition.   Or they carjack.

And sometimes technology enables crime.   We were supposed to get a new air traffic control system decades ago.  Our existing system relies on radar to track planes, with each plane providing a "transponder" which broadcasts its identification and altitude in response to being hit by the radar beam.   A proposed new system, ADS-B would rely on GPS, with each plan broadcasting its position as well as altitude, speed, and other data.   It seemed like a good deal until 9/11.

After that, well, someone pointed out that it would not be hard to "spoof" the system by altering the ADS-B system on a plane so that it reported a different location, altitude, speed, or identification.   The system might not realize a plane was off-course until something very bad happened.   Changes have been made to provide redundancy and perhaps ADS-B will become a reality in the near future.  The point is, you have to think like a criminal - or a terrorist - to find the holes in new technology and find new opportunities for crime.

Even something as stupid as a $10 laser-pointer can be used to try to blind a pilot and down an aircraft.   Our massive Interstate highway system is a modern marvel of transportation, until a 14-year-old decides to drop bricks off the overpass and kills some Mother on her way home from work.   New technologies, new terrors.  And it has been going on for some time now.  Bonnie and Clyde wouldn't have succeeded as long as they did without the Ford Model A and the flathead V-8.  He even wrote a letter to Henry Ford, praising the car for its getaway uses.

In the UK they have cameras everywhere which helps them fight crime, or at least catch people once the crime has been committed.   We don't have so many of these in the US because of "privacy concerns" - apparently what street you walk down is a state secret here.   But terrorists are not deterred by police cameras - they only provide the horrific documentation of a terrorist attack, which actually helps their cause, as people are terrorized by such after-the-fact videos.   Suicide bombers are not worried about being "caught" unless it is before they can carry out their crimes.

The RFID and near-field technologies would seem to help deter shoplifting and crime.   The clever "stealth" shoplifter who conceals items on his clothing and slips out of a store - only to return the merchandise for cash or store credit, is having a harder time as I discussed.  Store cameras catch him in the act, and store security can tap him on the shoulder and detain him.

But that doesn't stop the "brute force" attack.   People grab armloads of goods and simply run out of the store.   Store security doesn't chase the thieves as if the thief knocks down a customer the customer will sue the store for injuries.  Or even the thief will sue.  So the "smash and grab" technique has become very popular with shoplifters.  Stealth and deception are out, brute force is in.   And all this high-tech doesn't deter brute force.

And I think some of this "tech" could backfire in a big way.   For example, some cell phones rely on your finger print to activate.   If someone steals your cell phone, they can't use it without your finger.   Of course, some thieves might just decide to cut off your finger or hold a gun to your head and force you to unlock the phone.   The same is true for ATMs.   Again, all the high-tech in the world might deter the pickpocket who uses stealth, but not the criminal who puts a gun in your face.

And of course, many if not most crimes are not for profit but crimes of passion.   Technology might help us catch such criminals, but not stop such crimes.  Someone shoots their spouse or lover or rival or foe, and there isn't much you can do to stop this.  You can only clean up after the fact, collect evidence, take witness statements and try to find the perpetrator.   Usually its the guy standing over the body with the gun.

Self-driving cars might put an end to speeders, reckless drivers, texters, drunk drivers, as well as reduce the number of accidents.   But again, thieves and terrorists will figure out new ways to spoof technology to create crimes or horror.   A terrorist could fill a self-driving car with explosives (or plant them under the hood) and set it off to a crowded destination.   Suicide bombers without the suicide.   And if you programmed 10 or 20 or 100 to go off around the same time.....

So how do you fix that?  Put cameras in the cars?  Motion detectors?   Would people stand for that?   Surely someone is thinking about these things.

A self-driving car could be used as a getaway vehicle, I suppose, but computers would have to be programmed to track the paths of cars (again, privacy concerns).   A bank-robber gets into a self-driving car and speeds away.  No one gets the license number.   How do you track it?  Under today's laws, you'd have to go to a judge and get a search warrant for Uber's data files, hire five programmers to go through it and find out where the car went.   By then the crooks are long gone.   And if they changed cars several times en route, well that could complicate things. 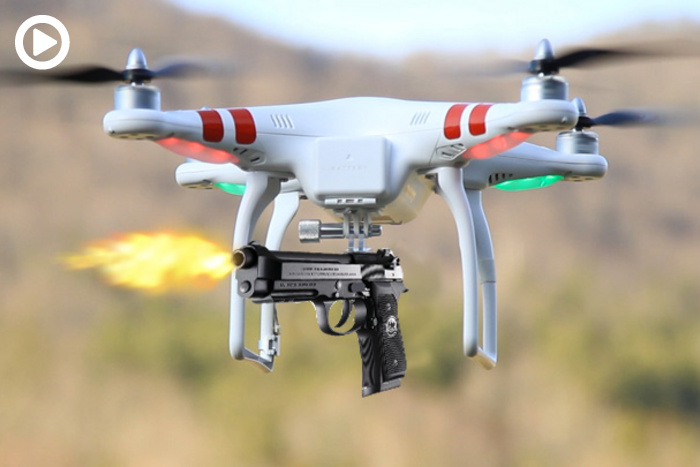 This isn't hard to do.

What about drones?  Couldn't the police use them to deter crime?  Sure they can.  And criminals and terrorists can use them to cause crime.   Drone-mounted guns are already a thing, and could be used to rob or murder someone by remote control.  How can you outrun an armed drone?  You can't.  You just hand over your wallet, perhaps to a second drone and hope for the best.  Terrorists are already dropping bombs via drones.   People are dropping drugs and other contraband into prisons via drone.  This new technology may create more crimes than it deters.

If technology is to deter crime it is in providing a better standard of living for everyone.   Crime decreases when people are better-off, which is one reason crime has dropped so dramatically since the 1970's in America.   But this also means we have to look at new technologies and think to ourselves, what would an evil person do with this?   And then figure out ways to prevent such technology from being used for evil purposes.

And therein lies the rub.  Technology creates all sorts of human problems and the easiest way to curb these abuses is to limit our freedoms - our right to privacy being the first casualty, our right to free speech being the second.   That in turn ties our hands, as people get up in arms about "surveillance" as the NSA tries to track terrorists and other types of criminals.   To some extent, these concerns are valid, in other cases, less so.   To hear some people tell it, people have a right to commit crimes, provided they are not caught.   I'm not so sure I'd go along with that one.
Newer Post Older Post Home