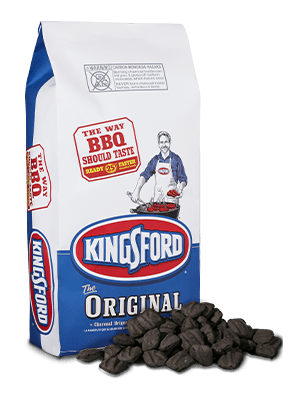 These briquettes created an entire industry and backyard tradition.

Kingsford Charcoal Briquettes - when I was a kid, I just assumed this is what charcoal looked like.  Little did I realize that scrap wood bits would be used to create an industry and a demand for a product!

Not long ago in this country, if you wanted to cook over a fire, you had to get firewood, build a fire, let it die down to coals, and then cook over those coals.  Needless to say, it was an onerous task.

Charcoal was available back then - to your local blacksmith.  Charcoallers, were usually local alcoholics and indigents who would amass quantities of firewood and build "charcoallers" out in the woods (usually on someone else's land), which were like a kind of oven, kiln, pit, or dirt mound.  The key was to let the fire burn enough to make charcoal from the wood, without consuming the wood iself.   Controlling the oxygen flow was key.  It was like making coke from coal - the resulting fuel was nearly pure carbon.  The charcoaller who fell asleep (from consuming too much bootleg whiskey, perhaps) might find himself waking up the next day to nothing more than a mound of ashes.   But to those who kept watch, the harvest of charcoal could be more than enough to keep them in cheap booze for another week.   It was not a glamorous job to be sure.

Blacksmiths would then use this charcoal in their furnaces, which aided with the help of a bellows, could heat iron or steel to white-hot temperatures, allowing them to forge it.  Mere wood would not reach such temperatures.

With the advent of modern industries, modern foundries, and whatnot, the charcoaller went by the wayside.  We had electric and gas furnaces, as well as coal and coke.

Enter the 20th Century.  A guy named Henry Ford is churning out Model-T Fords with wooden-spoke wheels and wood-framed bodies.  A lot of scrap lumber is produced as a result.  His relative, E.G. Kingsford, approaches Ford and together they start a charcoal plant, using the scrap wood from the Model-T assembly line.   Waste not, want not!  This is the difference between Billionaires and mere Millionaires.

Not only did they make charcoal from the waste wood products, they promoted the idea of the backyard or automobile "pic-nic" complete with charcoal briquettes (or briquets) to cook your meat on.   Ford dealers sold "picnic kits" with portable braziers and bags of Ford Charcoal.  No longer did picnickers need to bring firewood (or forage for same) when they wanted to dine al fresco, nor would they have to wait for fires to die down to coals to cook on.  Rather, a quick fire could be made from manufactured briquettes and cooked on, in a matter of minutes.

The backyard barbecue was born.

Or should we say, manufactured?   While cooking out-of-doors was certainly nothing new (indeed, many turn-of-the-Century kitchens were located outdoors due to the heat involved, as well as the fire hazards) the idea of cooking outdoors as a fun recreational activity was something of a novelty - and perhaps a novelty of the urban and suburban set, the key demographic for Ford's new low-priced cars.

Indeed, many rural farmers see no special treat in eating outdoors.  My brother-in-law, raised a farmer in Nebraska, detested the idea of eating outside.   Eating outdoors was something you did while plowing or harvesting, in his mind, a necessity, not a luxury.   Certainly not something to be enjoyed.  He would take his food from the picnic table and go inside to eat because that was the preferential place to consume food.   I have since met many people who share the same opinion - both from rural and urban backgrounds - that eating outside is just, well, icky to them.    How odd - to me, anyway.

Nevertheless, it fascinates me, how an "American Tradition" that is ingrained as the 4th of July, is something that was largely created out of whole cloth, because a Billionaire had too much scrap wood pieces on his hands - and didn't know what to do with them.

And yet, we all signed onto it, and in fact, are grateful for it!
Newer Post Older Post Home