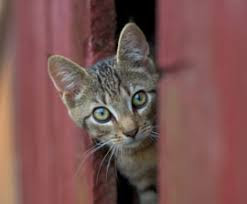 Adopting a feral cat can be a nightmare.


We went to one of the "Happy Hours" at one of the hotels here on the island.  We have a rough life.  The locals fixate on the discount drinks and food and figure out where to go each day of the week - and share this information amongst themselves. Usually, within a month or two, the hotels tire of drunken locals and their beer budgets and re-think their happy hours.  On Wednesdays, it is the Hampton Inn (disclaimer, I am a shareholder) with $3 drinks and $5 entrees.  If you have to go out once a week, you can't beat those prices.

In the parking lot, we see a couple leaving.  They start their engine and a cat jumps out from under the car.   He is a large male, skinny as a runt, with beautiful tiger striping.  He walks right over to me and rubs against my leg.  I pat him on the head and he pushes against me.  "Nice Kitty," I say, and walk away.

Leaving an hour (or so) later, kitty meets us in the parking lot.  I pick him up and he purrs like a motor.  Clearly he was not always a feral kitty, but likely someone's pet who escaped.  He has a large frame and head, but is skinny - and filthy.   I pet him and he purrs.   I pick him up and he purrs so loudly, my ribs vibrate.  I try to set him in the hatch of the car on a blanket and he jumps out.  He wants humans, but he is skittish - but not as skittish as a truly feral cat can be.

He runs away, but then turns around and walks back.  He wants humans - and he doesn't.  He wants a home, but he likes the parking lot and dumpster.  He is like a homeless person - he wants better in life, but then again, the wild life has its advantages.  Freedom.  No worries.  There is always some rotting garbage in the dumpster and a hotel guest willing to pat his filthy head.   No flea baths for him!

So we drive away, reluctantly.   Feral cats can be a problem, and they can make horrific pets.  The are like autistic children, perhaps.   Not being handled as kittens, they do not like being handled as adults.  They are standoffish - moreso than pet cats (which are pretty standoffish as it is!).  Some truly feral cats may, at best, form an only fleeting relationship with humans - based largely on the availability of food and a warm place to stay.

We drove away, reluctantly, but then again, glad the kitty didn't jump into our car.  Litter boxes.  The smell of cat food.  The expense of vet bills.  Boarding your animal while you are away.  The smell of animal in your house.  Cat hair in everything.   You don't realize it until you are pet-free how much of a burden (and joy) pets are.  It seems that this ying/yang thing is inescapable.  You can't have one without the other.

Feral cats probably should be left feral.  Unless you are truly heroic human with a lot of time on your hands and you never leave home, a feral cat can be a nightmare.  They may never adapt to life as a "pet" although some exceptions have been known.

Mark's parents adopted a cat named "Big Boy" - although he really adopted them.  He showed up at their house in Florida one day and decided to move in.  A large black-and-white long-hair cat, he had an appetite for food.  He weighed at least 20 pounds - maybe more.  He was the size of a small spaniel.   He eventually allowed himself to be domesticated - on his own terms - and moved in with them.  When they went North for the Summer, he was flown in carrier to Bangor and picked up at the airport by my brother-in-law.   From scrawny alley-cat to overweight jet-setter, he was Bustopher Jones in the flesh.

Of course, cats rarely live beyond 18 or 20 years, and eventually "Big Boy" succumbed to the inevitable.   And he was the exception to the rule - the feral cat who came in from the cold.  But I suspect, like the kitty at the hotel we saw tonight, that he was a pet cat that who had escaped and got lost from some tourist, months or even years ago, and made his way in the world, always looking for his owner to come back - not realizing it was he who ran away, not his owner.

The poor kitty at the hotel.  He purred so loudly.  Maybe he will find a home.  Or maybe he will live out his life as Hotel Kitty, with fleas and ticks and dumpster meals, and the occasional pat on the head from a guest.

But whether he would make a good pet, that is another question.
Newer Post Older Post Home