Shave Clubs - Breaking the Monopoly of Those Bastard Gillette People? 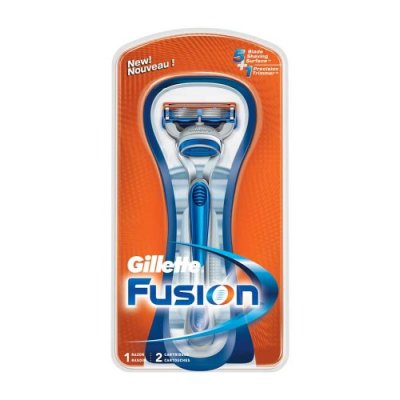 Is there a cheaper way to shave?

And the razor companies keep up this game by coming out with two, three, four, and now five blades and then obsoleting their older designs, forcing you to upgrade.   Sounds like a software company to me!

But at the same time, the Internet allows us to cross-shop with other products and allow new companies to "disrupt" older ones.

You would think that traditional brick-and-mortar stores would do this, but you'd be wrong.   Producers actually pay retailers for shelf space and also to de-emphasize their store-brand products.   Wal-Mart, for example, used to have great store brands, but has decided to push "brand names" and often make their own great products impossible to find, if they stock them at all.

Similarly the Winn-Dixie brand razors were great - until Winn-Dixie stopped selling them, no doubt under pressure from the razor mafia.  Brick & Mortar has been corrupted by the brand-names.   The big cola companies buy end caps in the grocery store and even stock them.  The "stores" are no longer wholesale buyers and retailer sellers, they are just a platform (like eBay or Amazon) for 3rd parties to hawk their wares.  In a way, they are no different than those booths people rent at the super-flea market or the antique mall.   The retailer just provides space and checkout facilities and takes a cut off the top.

Into this market the online disruptors enter.  And they have entered in the form of "shave clubs" which offer competitive products at cut-rate prices.  And no, don't go looking on Amazon or eBay or whatever - those sites don't really have great prices on razors - just slight reductions from Brick & Mortar retail.

What got us started about thinking about this was a friend gave us some free samples of the "Schick Xtreme3 Sensitive" disposable razor.   When you think about it, disposing of just the head and keeping the plastic handle isn't really changing much in the world, and these razors seemed to work even better than the Gillette Mach 3.  The razor itself is actually flexible.

Schick has been the "we try harder" competitor to Gillette lately, but has tried to fight back with their own online "shave club".  But as you might imagine, they can't undercut their retailers, so the prices on that site are not very good - more than a dollar a razor.  What was interesting was that they sold Schick blades that fit Gillette handles (expect some sort of Patent or Trade Dress battle to ensue).  But the prices were "meh" so we took a pass.

Dollar Shave Club has gotten a lot of press as starting this "shave club" trend, or at least being one of the early parties.   But the site is a bit confusing, and it seems they want to sell expensive five-bladed designs, with their own handle, of course, and accessories, on a subscription basis.  Their website is slow-loading and clunky.  And they seem to be more interested in selling "product" (a shorthand for goo that women and gay men like to slather on their faces) than actual shaving gear.   After ten minutes on the site, I could not find a razor or a price for one.   I was just about to exit the site at that point....

I finally found this page, which lists $9 a month razors, which is a little more than just a buck!  If you scroll down, it does go to a buck a month for a twin-bladed razor.   This reminds me of how GM offered a "low low list price" on the Chevette by offering a model with no back seat.   Twin-bladed razors are not horrible, they just slice up my face into little chunks of meat.  Oh, and "this razor does not ship free" but no word on what shipping charges are.  I suspect this is their "loss leader" product that they use to try to sell accessories and upgrades.

The "monthly" charge is based on four razors per month,  allowing you one per week, which is OK, I guess.   The four-bladed model for $6 (free shipping) seems like it might be a good bargain.  That's about $1.25 per blade.  Is that a good price?   We'll see.

Harry's advertises on the internet a lot, so I thought I would check them out.   A "starter set" with two blades, a handle and shave cream is a whopping $15, with your choice of handle colors.  The more deluxe set is over $30.   The "shave plan" costs a whopping $1.87 per blade, however.  They seem to be pushing a more "upscale" shave, and that's fine and all, but not what we are looking at here.  Obviously, there is little money to be made in "dollar shaves" so they push lotions and fancy razors which have much higher margins.   Can't blame them for trying, but can blame ourselves for buying!

The National Shave Club doesn't have their own brand of razors, but carries the Schick disposables, for about a buck apiece.   They offer to sell you the items outright, or on a monthly subscription basis.  I don't like the subscription idea, as I am not sure I want to "subscribe" to something I haven't tried.  I ordered the Schick razors, 24 for $25 or about a buck apiece, with free shipping.


Sam's Club has the same Schick disposables for less than a dollar each.   So we picked up some there as well.  They also sell the Gillette Mach 3, but it costs nearly $40 for 20 razors or about $2 a head.  National Shave Club is no better - about two bucks a head.  Gillette is just expensive, period.

I think the long and short of it is that we will say goodbye to Gillette on a permanent basis.  Their razors are more expensive than competitors and not necessarily better.  And by more expensive, I mean twice as expensive.   When you pick up a package of razor blades and it costs $40, something isn't right.

Of course, there are even cheaper alternatives.  My hippie brother still uses a double-edged "safety" razor (you know, the old fashioned kind with the thin blades you take out and put in that slot in the back of the medicine cabinet when they get dull).   This makes for macho excitement when you shave.

There is also the Al Qaeda beard approach favored by many hipsters today.  However, even people with beards have to shave - or should.   There is nothing worse than someone trying to "grow a beard" by just letting it all grow out, leaving a tangle of pubic hair coming out of their neck and cheeks.  That's not a beard, that's just forgetting to shave.

I may re-examine the dollar shave club later on, but I am gun-shy about starting another "negative option" subscription service in my life.   If I don't like the service, how can I cancel it?

As a reader notes, many "negative option" companies are finding ways to keep charging your card even after the expiration date on your card passes.   Actually, it isn't hard, just enter a new year in that field, odds are, it will be from 1-5 years from the last expiry date.  And apparently there is even a service for negative option subscription people to use to obtain new expiration dates when their subscriber's cards fail to process.

No, I am not sure I want to get back into negative option again!

I made the switch to a safety razor about 2 years ago.

And, to get in the spirit and have a much better shaving experience than the store shelf shaving creams:


All that sounds fine, and I briefly used a safety razor for a while (I believe it was a gift from said hippie brother, in fact).   But my spouse likes the triple edge, so sometimes we have to make concessions.  I'm just happy to be saving 50% over Gillette.

And the cost of accessories  - $31 for a razor (they have generics for $9 on Amazon) and the cost of shaving cream.... I buy mine at the dollar store!  (guess the price).   You might be getting a more enjoyable shave, but I think I have you beat on price.

The best shave I ever had was at an old Italian barber shop in Bristol, Connecticut back in the 1970's.  Old Italian Barbers are a dying breed, if in fact they are all not dead by now.  He put hot lather on your face and shaved you with a straight razor which he sharpened on a strop.   He'd put the thing on your neck and say, "hold still now" and I'd think, "You're damn straight, you've got a knife to my neck that could cut through my esophagus with a flick of the wrist!"

You got a complete haircut and shave at a place like that.  They cut your nose hairs and ear hairs, too.  It was an experience that probably has been lost to time.  You could hear the theme from The Godfather playing in your head the whole time.  And the other customers all looked like, "They knew a guy..." if you know what I mean.

But if you want to go "old school" and save money, then go with the straight-razor and strop.  The bonus was, back then, you could beat your kids with the strop (and did).  Today, a guy gets thrown in jail for slapping his uppity daughter.

Chuck that sissy "safety razor shit" and get a really manly straight razor.   The nice thing is, it doubles as a weapon.  And it's only sixteen bucks! 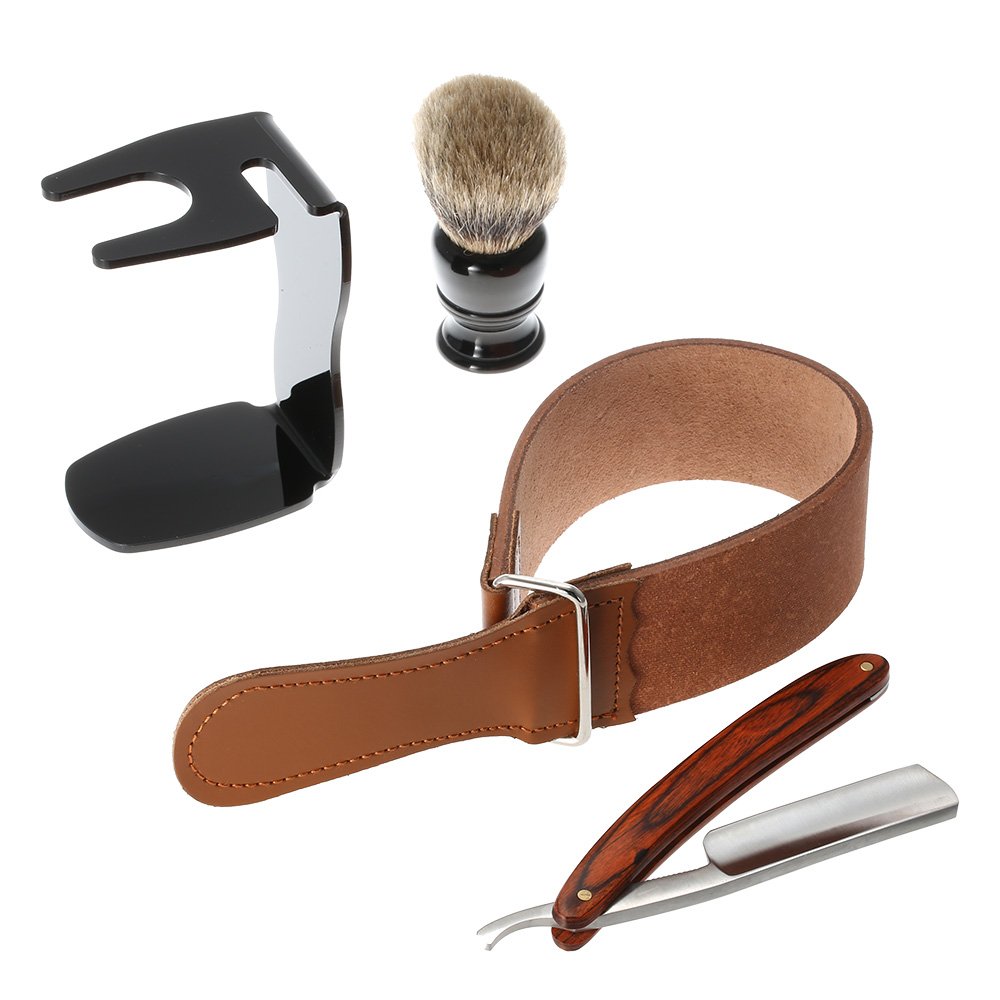