Too Many Damn Buttons! 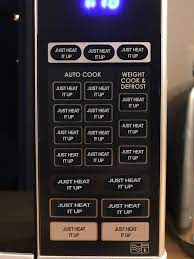 What is the point of paying extra for a "feature" on an appliance or car, if you never use it?


When we bought our house, it came with a new stove, a slide-in model which are expensive to replace, sadly.   We don't hate it, but Mark prefers gas, and it is an electric glass-top model.

The worst thing about it is that it has too many features.   There are buttons and settings that we never use and never will use and in fact, often get in the way of using the appliance.

For example, there was a button on the front panel labeled "simmer" that is easy to hit by accident.  When we first moved in, we could not figure out why the stove didn't work - it wouldn't heat up!  After reading the manual, we realized that this "simmer" switch, when engaged, turned the heat down on the burner so as to simmer whatever was in the pot.  You could turn the heat knob all the way up, it wouldn't increase the temperature one degree.  It was like a cruise control you couldn't override.

It was an interesting "feature" but one that is useless to us.   Not only do we never use it (we turn the heat down manually) when it is accidentally engaged (which happens often) food ends up not cooking.  So we have to obsessively check this switch whenever we use this stove, lest you sit there for an hour or so waiting for your egg to fry or water to boil.

Other appliances are little better.  Our washing machine is a fairly simple model, but has four separate cycles, of which we have used one and only one over the years.  The only options we use are the load size switch, which regulates water level. The dryer has several cycles, but we use just one - the standard cycle.   We bought these as floor models and they came with the features, whether we liked them or not.  A simple washer can cost as little as $299.  But you can spend thousands on one if you want to.

The microwave has a temperature probe in a drawer somewhere.  We're never going to cook a turkey in the microwave, so it is a useless feature.   We use the microwave rarely and even then, like most people, to reheat things or melt cheese.

The problem with these "features" is that they complicate what is basically simple machinery.   A feature is nice and all, until it breaks and prevents the machine from working.  And the reason why these features are added are the result of "feature creep" and "me-too-ism".

Feature creep occurs for a number of reasons as the link above explains.   Designers or managers want a product to be all things to all people, or perceive the market demands certain features. Me-too-ism results when a competitor offers a feature and a competing manufacturer believes that such a feature is necessary to counter the competition.

But in the end, it all comes down to the consumer who buys the appliance. And often consumers succumb to feature creep and me-too-ism as well.  If you are looking at two appliances and they are about the same price and quality, you might be steered toward one over the other based on features.  "Well, both these washing machines are about the same price and have the same level of quality, but since the Maytag has a gentle cycle, I'll buy that!"

And in many cases, these extra "features" are largely bogus or not needed.  And in the case of old-school washers, these different "cycles" were largely just varied the amount of agitation time or altered the rinse cycle or whatever - without providing any additional hardware or complexity to the machine.

But today, you can get as complicated as you want.  Refrigerators with Internet access and computer screens - and cameras so you can see what is inside, from your smart phone.  Washing machines with tiny washing machines located in the base, so you can wash doll clothes for your kiddies (I am guessing).   The machines we have today are a quantum level of complexity - mechanical and electrical - more than those in years past.  But the increased functionality for this increased level of technical sophistication, is debatable.

An internet refrigerator with camera and display screen can cost thousands of dollars. A basic refrigerator can cost hundreds.   Is a 10x delta in price really worth the added functionality?  Or are you just buying the bragging rights to having the latest and greatest?

Before we had internet refrigerators, the "professional grade" fad was big.  My neighbor had a Subzero (formerly a division of Carrier) refrigerator built-in to their new kitchen, as they were told it was the best refrigerator you could get.  The problem was, of course, that it was very expensive and it broke down frequently, requiring a special repairman to come visit almost annually monthly to repair it.   Meanwhile, our basic Hotpoint side-by-side worked like a clock for over a decade, until we sold the house - with nary a repair, and at less than 1/4 the purchase cost.   Which was a better value?

That is the conundrum - status.  In years gone by, household appliances were not really status symbols.  Your washer and dryer were relegated to the basement and came in one color - white.   Few people had ground level (or sleeping level) washers and dryers - although in 1964 my parents had a "dream house" built in Rochester, New York, with the washer and dryer on the second floor. Very advanced for its time!  Sadly, my Dad was fired from his job months later, and my parents never got to enjoy their dream house, which turned out to be a financial nightmare.

Even kitchen appliances were not really status symbols.  Kitchens back then were blocked off from the rest of the house by doors, sometimes swinging doors, to keep the awful sight of the sink, stove, and dishes from the prying eyes of company.   Today, the kitchen is the centerpiece of the house, so look-at-me appliances and countertops are the norm.  Back in the day, the living room (for company only!) was the style centerpiece of the house, and you impressed your neighbors with your new sofa, not your new range.

But all that has changed.  Today, even the laundry room is a show-off palace, with color-keyed front-loading washers that cost thousands, mounted on pedestals that cost more than an old-fashioned simple toploader. Who is it, exactly, that we are trying to impress with our washing machines?   I mean, the real status with regards to laundry is to have  a live-in maid who does it all for us.   But few of us can afford that, and prefer to have machines instead.

So what's the point of all this?   Well, again, as a consumer purchasing appliances, you do have choices and if you choose overly complex machines, they may end up being less reliable and less satisfactory than basic, simple appliances.   Moreover, they may require expensive repairs, sending them to the junkyard long before a basic, simple appliance is dead.   And when the simple appliance breaks down, it is often just easier to buy a new one for less than the cost of a service call.

And for what?  For features that maybe you play with once or twice and then never use again?  What is the point of a programmable thermostat that is never programmed?

If you look at the history of cars, appliances, and whatnot, you do see a pattern here.  The basic simple models seem to last longer, and when they do break, it is less costly to replace them than to repair them.   Back in the day - or even today - you see more "plain" older cars still plying the highways than you see fancy luxury models.  The "luxury" cars become expensive to operate and maintain, so they depreciate in value rapidly (particularly after a decade has passed) and are often junked, not because they are unrepairable, but because repairing them is just too expensive and makes no sense.

Less is more, simpler is better.  Complexity for complexity's sake makes no sense at all.
Newer Post Older Post Home