Why are We Supposed to Hate Nestle But Not Coca-Cola? 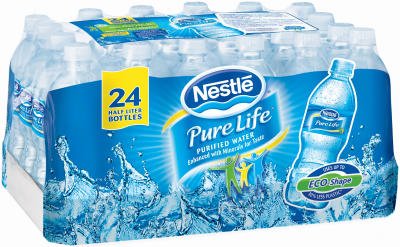 If you run a union plant, you can use tap water to make "bottled water" - but if you run a non-union plant and do this, you are pumping the aquifer dry!


Lately, there have been peripheral reports about Nestle abusing water rights in drought-stricken California.  People are literally dying of thirst while brutal inhumane international corporate conglomerate Nestle - the same one who "addicted" African babies to their infant formula - pumped the deserts dry to sell overpriced bottled water.

Well, that is a little extreme interpretation, but to read the press, you'd think big, bad, old Nestle was raping the earth.

But for some reason, we never hear the outrage against Coca-Cola, who takes tap water, purifies it, and bottles it and sell it.   And really, this is no worse than taking tap water, adding sugar to it, and selling it as a "soft drink".  Or beer.  In other words, it isn't a bad thing at all.

I think the answer is unions.  Unions are a form of organized crime, and they will use whatever means necessary to get their foot in the door of a factory.   And if this means besmirching the name of the company, so be it.   You want labor peace and good PR from the left-wing press?   You have to do business with Vinny and Knuckles, first.  Sign that labor contract, make some public donations to "GreenEarthKeepers of the World, LLC" or some group, and in no time you go from bad guy to good guy.

You don't pay the hush money?  We keep attacking you in the press.

Recently, there was an obvious play in the press about Tesla motors - that the workers there are working too hard and getting injured.  And not surprisingly, the factory is under assault by the unions to become unionized.   They planted articles in the press (press-release news) alleging that workers are collapsing on the job and losing fingers in the machinery.  Hard stuff to prove or disprove, particularly when as a journalist, you put the word "alleged" in front of the press-release and then just print the damn thing verbatim.

Sadly, this is the state of journalism today.  Newspapers and online sites - and television news programs - often barf up, verbatim, whatever press release sounds like it will capture eyeballs.  No real "investigative" journalism goes on, no one bothers to look into the other side of the story. Companies involved, for legal reasons, have to say "no comment" which makes it sound like they are guilty of something and hiding it.   People don't bother to think too much about it, other than to be Outraged!(tm) and post something on Facebook.

The Nestle bottled-water stories are starting to fade out as more and more plants vote to unionize. I suspect when they are fully unionized, you will see stories about what great stewards of the Earth Nestle is, and how great infant formula is for 3rd world babies.

Whenever you see a story like this in the press, think about it a bit.  It may be true, or it may be a one-sided story.  Is there some organization that wants to tear down the company in question (e.g., union?).   Who benefits from the story?    And does the exact same story appear in a number of publications, word-for-word?

I am skeptical of a lot of things.  And the idea that one bottled drink company is raping the earth while all the other similar companies who do the exact same things are not, is something I don't think holds water.