Which Tri-Five Chevy are you?

Which Tri-Five Chevy is your favorite?  It might say a lot about your personality.

One of the most significant cars to come out of the 1950s were the so-called tri-five Chevys - the 1955 through 1957 models which are still cherished today as collector's items.  Oddly enough, they weren't the best selling cars of the era, often being outsold by the more dowdy-looking Ford Fairlane.

What made these cars so significant? This was General Motors' first attempt at an inexpensive overhead valve V-8 engine powered car that was relatively lightweight and nimble for its time. The 1950 through 54 Chevrolet were large and heavy and under-powered.  The term "Heavy Chevy" arguably could be said to emanate from this era. 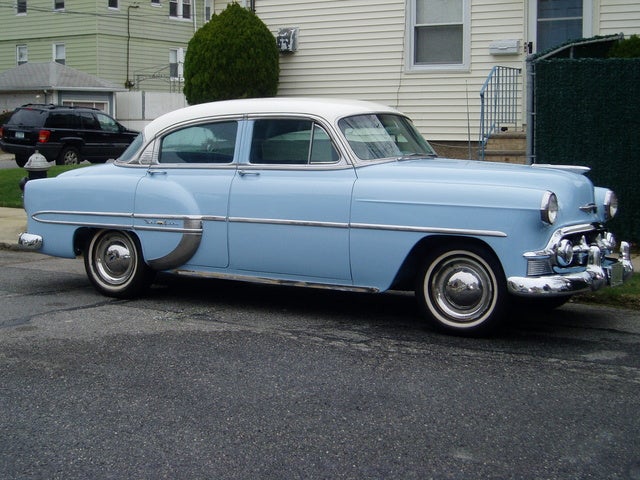 The 1953 Chevy was bloated and slow, offering only one engine choice, an inline six.

The 1950 through 1954 Chevrolets were bloated affairs powered by the famous Blue Flame 6.  No V8 option was offered.  Meanwhile, Ford was having brisk sales of its aging flathead V8 and developing a new overhead valve V-8.  For 1955, General Motors introduced a slightly smaller and lighter weight car that also looked less bulky than the previous models.  But most significantly, GM introduced the famous small block Chevy V8, and engine that essentially is still in production today powering everything from Corvettes to Tahoes, to pickup trucks.

But by 1958, the Chevrolet once again bloated to enormous proportions.  While the 58 through 60 Chevys have their own fans, they are entirely different car than the tri-five Chevys which have a smaller and lighter appearance.

But among these three models of the tri-five Chevys, there are significant differences.  While the three model years share the same chassis and main body components,  the front and rear styling of each model was largely different.  The 1955 Chevrolet featured an egg-crate grill that was said to be reminiscent of the Ferraris of the period.  The car had a sporty smooth look, particularly with its truncated tail fins in the rear.

The '55 Chevy has a sports-car like grill, reflecting the fascination with European sports cars in America at the time.

The 1956 model featured a full width grill which I believe was an attempt to compete with Ford's popular Fairlane.  The Ford Fairlane ads for the time touted its "full-width grill" apparently mocking Chevrolet's attempt to emulate foreign makes.  Perhaps it didn't help that the '55 Chevy grills started to corrode rather quickly revealing the brass plating underneath the chrome which would turn green leading to the nickname "the green teeth Chevy's" 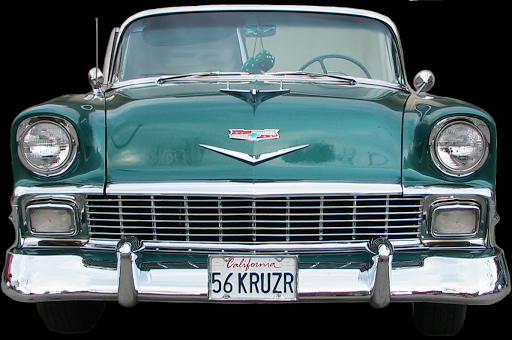 In 1956, Chevy followed suit.  You either love it or hate it.  To  me, it makes the car look larger and heavier, but maybe that was the point, back then.

While the 1956 models have their own fans, I have to say I prefer the '55 look which appears to be cleaner and less cluttered. 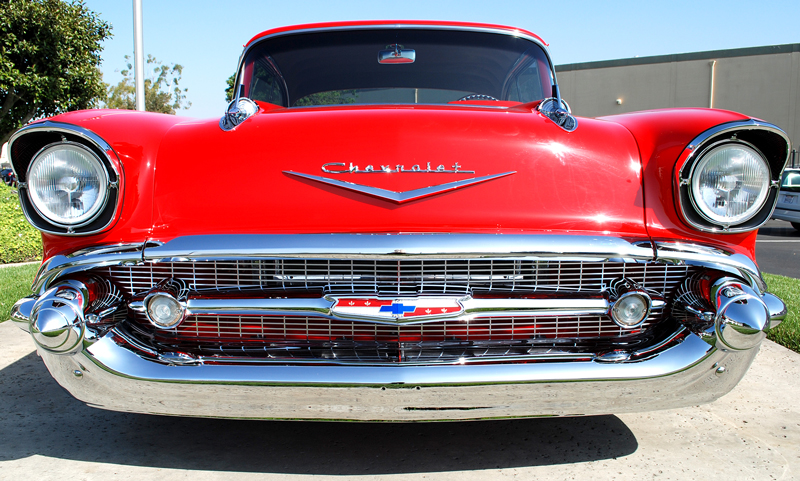 The '57 grill is a classic example of the jet-age jukebox overwrought styling of the period, and also mimicked the Cadillac of the time - a design motif Chevrolet would revisit in the 1970's.

There were arguably two things going on with the 1957 grill.  First, it was part of the "jet age" styling, designed to look like the intake of a jet engine.   It gives the car a much heavier, "big car" look that mimicked the far more expensive Cadillac.  With its "dagmar" bumperettes it was selling the masses a "Cadillac Jr." for far less money.   John Delorean would take a page from this playbook in the 1970's, putting a Cadillac grill on the full-sized Chevy of the era and watching sales soar - much to the chagrin of the managers of the more expensive brand. 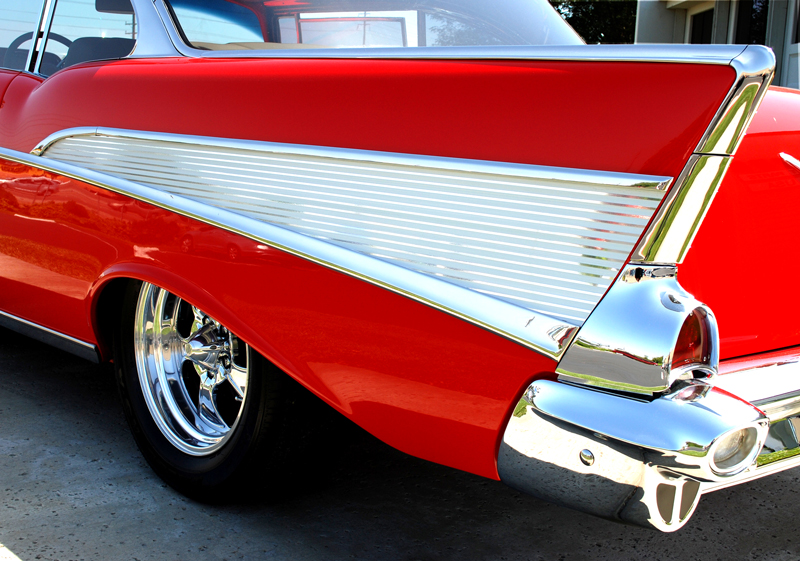 The 1957 fins were, well, something else entirely.   They have more of a tacked-on look.


Of course, it is the 1957 model that most people remember.  With its starkly angular fins, wide side moldings, and jukebox-like grill, as well as the enormous amounts of chrome, the '57 has come to symbolize the excesses of the 1950's, even though the Virgil Exner "Forward look" Chryslers were arguably are a better example of this.  The '57 was still a small lightweight looking car compared to the Chrysler products which appeared to be bloated and huge. This is what Chevrolet was trying to compete against - the 1957 Plymouth Fury, at least in the fin department.   Ford largely stayed out of the fin fray.

As a kid, I would probably was more drawn to the 1957 as my favorite of the three.  And I think most people are drawn to that model because of its iconic status, particularly the pointy fins.  However, the front end has a very heavy bloated chrome look to it which is a love/hate affair.  I think over time as my tastes have matured, I have gravitated away from the 1957 and toward the cleaner, simpler look of the 1955, which is less chrome-heavy.

The shape of the body and grill of this 1952 Ferrari gives you an idea what the Chevrolet designers were getting at.

The '55 Chevy mimics this look.  Early Thunderbirds also had this egg-crate grill.

My brother-in-law is a fan of the 1956, but I don't see it.  It has too much of a "me too" look trying to ape the Fairlane.   The oval egg-crate grill with the sculpted styling of the 1955 seems to be all of one piece or one thought.  The later "full width" grill of the 1956 seems tacked on, and the bloated whale-mouth of the 1957 and stiletto fins also seem "me too" to the Plymouth Fury - detracting from the central theme of the design.

While the Interiors of all three models were largely the same, the dashboards were indeed radically different, at least between the 55-56 models and the 1957.

The 1957 went to a more European look with round gauges mounted in a dashboard binnacle.

It is odd, but the dash of the 1955-56 models seems like it would be more at home in the baroque 1957, while the sporty round gauges would fit the sports car theme of the 1955.   The round gauges would seem to be more sporty, but set in a body-colored bezel, the seem kind of, well, out of place.  So I think the '55 wins here as well.

Which tri-five Chevy are you?   I think which one you like says something about you, too.   If you are impulsive, young, and like loud, over-the-top styling, you will immediately say, "the 1957" as it is the obvious choice, being the most well-known and easiest to spot of the three.   But if you are more contemplative and think about the overall design theme and favor original designs, you might be drawn to the 1955 and its sports-car look.   If you are conservative and don't like to make waves, maybe the "full width" grill of the 1956 appeals to you - a more staid, larger-looking car that blends in with the crowd.

One car, three model years, three completely different cars, in terms of styling and the people who love them.   Of course, if you love all three, I can't blame you.  But what does that say about you as a person?   Fickle is what!  Or maybe schizophrenic.
UPDATE 2020:   There is an urban legend that '57 Chevies were put back into production, in secret, by former GM Engineers who realized it was the "perfect car".   It is something of a joke, actually, trying to explain why so many '57 Chevies are still around (people keep the cars they like and let the rest go to the junkyard).   No, not everyone drove a hot rod or a convertible or a hard top back in the day.  It is just that the six cylinder four-door post sedans and wagons went to the crushers, long ago as they rusted out.
But oddly enough, today, you can pretty much build a new '57 Chevy from the frame up (as a friend of mine has done), with all new parts - as well as other "Classic" cars.  Ford will sell you an entire 1965 Mustang Convertible body, in raw sheetmetal.   Just add money.
Meanwhile, the Fairlane, which outsold the '57 Chevy, is much harder to come by at the old car shows.
Newer Post Older Post Home