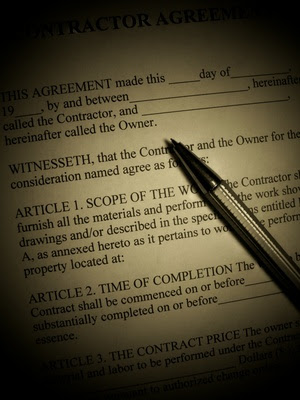 I was fortunate in that in 1983, I was able to buy a house through the Farmer's Home Administration FmHA, not FHA)  that subsidized interest based on my income.  Before you howl in protest as to how I suckled at the government teat (and we all do) the program "recaptured" subsidized interest when you sold your home.  So when I sold the $22,000 house several years later for $35,000, I only saw about $5000 of that capital gain - the government got the rest.

But many others could not qualify for that program.   Maybe they had bad credit or ironically made too much money or their home wasn't "rural" enough for FmHA.   So they signed land contracts with homeowners instead.  And a screwier deal you've never heard of.

To begin with, the house generally had to be owned free and clear of any mortgage (usually) so the pool of homes for sale was limited.   And you were not buying the house, as in the traditional sense, where you get a mortgage, and you owe a personal debt to the bank, secured by a lien on the house.  With a traditional mortgage, you own the house, and are responsible for taxes, utilities, and repairs.

In a land contract, you contract to buy the property in installments, paying monthly installments for a number of years (as many as 30) at the end of which time you have paid for the house and you get the deed signed over to you.  Until you've made every single last payment, though, you don't own the house and your name is not on the deed.  If you miss even one payment, the house doesn't belong to you and you are evicted (not foreclosed, as there is no mortgage) and are out on the street.

Why wouldn't the seller just take back a mortgage instead?   A number of reasons.  First, the "seller" is pretty confident you'll default on the contract and they will take back the house and sell it again.  Second, a mortgage requires you foreclose on the house, which is more costly than simple eviction, so it gives the "seller" more leverage.   Third, well, just plain greed.  The seller thought they could get a better price this way, or thought they could reclaim the house later on and sell it again and again.  In an era of high mortgage interest rates, it was seen as a means of "selling" your house and getting a guaranteed retirement income, while helping someone who can't afford a traditional mortgage buy a house.

The "land contract" fad lasted a few years in the late 1970's and early 1980's but word got around it was a pretty screwy deal.   And as interest rates dropped, the need for land contracts evaporated.   But today, they are again back in the news and a whole new generation of suckers buyers have latched onto what can be a really raw deal.

Since the 1980's many States have passed laws about land contracts.  Sometimes they need to be recorded (which would be a good idea anyway, to put others on notice of your rights).  Some States have regulations that protect buyers.   But for the most part, it is still the Wild West - you can contract to do anything, and often people sign contracts that really, really screw them badly.

Several articles have appeared in the papers about land contracts gone bad, particularly in Detroit.  It is hard to feel sorry for some of these folks, though, as in one instance the buyer put down only $1600 and paid $400 a month - hardly a king's ransom.   In another case, the buyer could not afford to fix up the house and said, "either buy me out or give me the money to fix it up!" apparently hoping to profit on the deal rather than simply walk away.

Most of these houses are distressed properties - needing expensive repairs that exceed the value of the house.   The homeowners are not sophisticated enough to do "sweat equity" and replace a roof themselves or whatever.   It becomes unclear who is even responsible for repairs, as the "buyer" is really more of a tenant, and despite contract language to the contrary, believes their "landlord" is responsible for repairs.   And for many people, who rent their entire lives, this belief is hard to shake.

I sold a house to a guy once, who had rented all his life.  Three years later he calls me and wants me to pay for repairs to the house.  "My landlord always covered this," he said.  "I'm not your landlord," I replied.  People are funny.

The folks "buying" these distressed properties cannot purchase them outright because banks won't loan on distressed properties that need extensive work.  And usually the "buyers" have horrible credit histories, so they would not qualify anyway.   At best, they get a cheap place to live for a few years before they get tossed out.   At worst, it can be a money-pit nightmare if they try to throw money at a house that rightly should be torn down.

But on the other side of the fence, are land contracts such a sweet deal for the "seller"?   I would think not.   The sellers are often greedy and get what they deserve in the end.  If the "sellers" of these properties in Detroit decided to "take back" a mortgage instead of doing a land contract, they would be out of the loop in terms of repair costs and whatnot.   And they could re-sell that subprime mortgage to private investors, much as the land contracts have been sold and re-sold as stated in the article.  And if the buyer doesn't pay, the foreclosure process is well-known.  Better to follow conventional financing than to go exotic.

A friend of mine has tried to sell a house in a rural area using a land contract and is in the process of going to court to evict the tenant for non-payment.   In his case, it turned out to be a raw deal for everyone involved.   He "sold" the house on the land contract, but decided to move out of State.   Managing a land-contract home remotely is problematic, as it is akin to being an absentee landlord, and absentee landlords rarely do well.

Worse yet, the "buyer" not only made repairs to the property, he made half-assed repairs, tearing out the front windows of the house and installing a set of picture windows that did not fit properly, did not have a proper header panel, and caused a mis-match in the siding.   It all has to be removed, of course, as it is not up to code.   So my friend now has to screw around in court to get the tenant out, get the house back, fix the fixes, and put it back on the market, this time for sale in a traditional manner.   And of course, when he evicts, the tenant is sure to trash the place before he leaves.

From the tenant's perspective, it was a raw deal as well.   He lost his job so he could not make the payments.   All the money he put into "fixing up" the house was for naught, as he will have to leave the new windows and other "upgrades" behind (if he doesn't just smash them) and they all have to be undone anyway, as he was a half-assed carpenter.  What equity or whatever he was building in this contract is lost - just a string of payments much like renting an apartment.  He would have been better off in an apartment, as it turns out.

So it was a bad deal all around.   If you are going to "sell" a house this way, you can expect the worst sort of buyers/tenants who have horrible credit, are marginally employed, and likely have drug/alcohol/crime/family problems to deal with.   It is worse than even section-8 housing - at least there you get paid by the government!

For the "buyer" it is also a raw deal.  You don't "own" the house, so you don't get any tax deduction.   Any repairs or improvements are lost if you don't complete the contract for the full number of years.   While it won't help your credit rating if you perform on the contract, it will hurt it if you default as it will show as a large default judgement against you, if the "seller" takes you to court.

Hillbilly financing never works out very well for anyone.   Whether it is co-signing loans, refinancing car loans, "take over payments" or rent-to-own furniture or bling rims, once you step outside the norm of the financial network, all bets are off.   Novel financial arrangements or things done on a handshake based on trust of untrustworthy people (like co-signing loans, take over payments) are bound to go wrong.

Banks have rules as to who can borrow and how much they can borrow.  And there are valid reasons for these rules - as time has shown that sketchy people with a history of default tend to, well default on financial obligations.    We have a well-oiled legal system whereby mortgages and deeds can be recorded and houses can be foreclosed upon if someone doesn't pay.   It is a fair and balanced system with everyone's rights respected (and no, you don't have a "right" to stay in a house after you stopped paying the mortgage - where that crazy idea came from, I do not know) and everyone's duties and obligations are well-defined.

Once you step outside these norms, well all bets are off.

"But Bob!" you say, "What about people with shitty credit records?"
Well, how about this radical idea:  Don't have a shitty credit record.   Pay your bills, stop taking on stupid debts, like payday loans and title pawn loans, and stop trying to live beyond your means.   No, you don't "need" bling rims to survive, not when you have kids to support.   But of course, no one wants to hear that.

It takes time - and maybe even bankruptcy filing - but a credit record can be improved.   But many of the folks who seek out hillbilly financing deals don't want to wait five or seven years, they want the Camaro/Bling Rims/Big TV/House NOW and don't see why they can't have it.   So they sign another odious financing deal that is guaranteed to go bust and set them back four or five more years and ruin their credit rating a little bit more.
But alas, you can't unpoor the poor, as I have noted before.  Whether inner city ghetto or rural trailer park, poor folks make poor choices - and defend them to the death as "smart choices" and then demand a bailout when it all goes horribly wrong.

“Either buy me out,” he said, “or give me the money to fix it up.” - That is the mentality we are dealing with  here.
Newer Post Older Post Home