People on the West Coast have taken to calling their SUV's "adventuremobiles" - what is up with that?

Status sells, and lately the status car makers have been using to sell cars is the status of the rugged outdoorsman who is off for manly adventures every weekend!   I have to pinch myself now and again to remember that most Americans live only for the weekend and have these things called "jobs" that force them to work five days a week.

Not that I never had a "job", but I quickly realized that it was a means to an end, not an end in and of itself.   And once I was able to start my own practice, well, my hours got a lot more flexible, to say the least.  And once I accumulated wealth, I no longer needed a "job" and every day is an adventure not just the weekends.   But to accumulate wealth, you can't squander it on adventuremobiles, can you?

For others, a job is an end in and of itself, or if it is a means to an end, the end is a "fun weekend in your adventuremobile!"

What exactly is an adventuremobile?  The definition varies.   For some, it is an off-road 4x4 van with a high-lift jack, external jerry cans, two spare tires, a pop-up roof, and a bed and porta-potty - a primitive RV for going off-road.    And out West, there are more places to go off-road than back East, so maybe this explains why this is a West Coast thing.

For others, an "Adventuremobile" is little more than a pedestrian SUV with a sleeping bag thrown in the back of it.  Others define it more loosely - as anything from a dirt bike to a car or even a bicycle.

Why is this something different from just, well, a car, SUV, bicycle, or off-road RV?   It's different because millennials discovered it!  Whenever anyone born after 1990 gets into a hobby, they invented it, and thus must give it a new name, lest it be confused with the same exact damn thing their lame-ass parents did.   So Mom's hand-me-down Subaru isn't a worn-out SUV but a kicky "adventuremobile" after you've tossed a $500 REI sleeping bag in the back.

But of course, the real deal is it is all about marketing.   This simpering blog entry, for example, advises readers in the market for an "adventuremobile" to avoid buying a clapped-out old Subaru on Craigslist in favor of leasing a brand new one.  Because everyone knows that used cars are "unreliable" - so much to Subaru's reputation for 300,000 mile reliability!  All kidding aside, it is an asinine proposition - that the only two choices in life are utterly clapped-out crap on Craigslist or leasing a brand-new car.   This "adventuremobile" nonsense is being used to sell really bad financial ideas.  (And I suspect the "question" the poster is answering was a made-up one).

It is, in a way, like these postings you see from hipster 20-somethings who remake a used school bus into a "Skoolie" - an RV based on a used school bus platform.   Go on YouTube or whatever, and postings abound.    The problem with this idea is multifold.   First, when school systems sell old school buses, they are pretty clapped out.  My hippie brother used to buy these and the cult commune he lived on would paint them day-glo colors and they would drive them around - at about 45 mph which is what they topped out at.   But they would usually die a quick death, as the engines and transmissions would be pretty tapped out.   So another "storage bus" is born, and before long, they had a row of dead school buses parked at the cult site.

The second problem is, of course, that for the cost of buying and converting an old school bus into a half-assed RV, you could just go out and buy a used RV and start camping.  Yes, old RVs have quality problems, as I have noted before - which is why you can buy them cheaply and just run them until they die.  It would still last longer than a converted school bus.  It also is a lot less time-consuming and costly to just buy an RV than to try to make one.   In nearly every posting about School Bus conversions, I see the same three comments.  "This took a lot more time that I thought", "This cost more money than I thought", and "Gee, the old School Bus sure breaks down a lot!"

The third problem is, of course, you will look like a serial killer or mobile meth lab when you drive around in a converted school bus.  Only crazy people do this shit, so you will get a lot of weird looks, and some campgrounds may ask you to take your clapped-out pile of crap elsewhere.   If you are going to go this route, may I suggest you cover the bus with Bible verses?   It is sort of what these folks do, so you might as well jump in with both feet.

The "Adventuremobile" thing is, of course, related to the "Skoolie" trend in that some of these "Adventuremobiles" are old power company vans that are gutted and "redone" by spoiled 20-something middle-class kids living in their parent's basement.   Again, they spend more money converting a cargo van into a camper than they would simply buying a used van camper.

Worse yet are the ones who build an "adventuremobile" and then plan on either driving it to Argentina, or having it shipped to Africa or some other sketchy place, to drive around.  One 20-something in Colorado converted his Jeep to a Mercedes diesel engine, at considerable expense, and then blew up the engine.  He started over with a brand new Jeep and was planning on driving across Africa with it.   Hopefully, his plans will never come to fruition, as he likely will end up dead as a result - like this poor bastard who decided to "Motorcycle through Mexico" by himself.

He didn't make it very far.  And yes, I drove an RV through Mexico once - an experience I still have PTSD from.   And that was back in 2002 before they started cutting people's heads off.  Not recommended!

Americans are not alone in this idiocy.  Europeans (particularly Germans) love to ship their Unimog-based RVs to America to drive across this great land of ours.   They look pretty ridiculous, driving a vehicle best suited for the Sahara desert, into the local KOA campground.  Others ship over more pedestrian RVs.  We met one couple, from France, who shipped over a Fiat-based Class-C motorhome, only to have the transmission blow up in Canada.   A Fiat?  Wow, what were the odds!   Sadly, this was before they started selling these vans at the Dodge dealer so a transmission had to be expressed over from Italy.

You know, we do sell RVs here - and they do sell Landcrusiers in South Africa.  We did meet a nice British couple who bought an off-rent RV here in the States and merely put it in storage between trips.   Eventually they will sell it - which is a lot cheaper than having something shipped across the Atlantic, both ways.

Second, I think it can be a good way to waste a lot of money, if your "adventuremobile" is a hobby car.  On one forum, a poster writes that his commuting vehicle, a 18-year-old clapped out BMW, now has 200,000 miles on it and is unreliable and he can't afford to fix it.  If you are in debt and have a hobby car, something isn't right.  Should he "risk" driving his brand new Toyota 4-runner to work, or will that ruin it?  What about gas mileage?

The bottom line is, having a car you just drive on weekends is a big luxury and can blow a huge hole in your budget.   Not driving a car is almost worse that driving it too much - and his "adventuremobile" is depreciating rapidly and he isn't getting much use out of it.   So yea, sell the old BMW and drive the Toyota to work.   Having two cars while being in debt is idiotic.

The other aspect of this is of course, posturing.   The folks who use the term "adventuremobile" also no doubt have expensive kayaks and expensive mountain bikes and are the kind of people who suck the fun out of everything by trying to out-expert each other.   So rather that be just some schmuck who went camping last weekend, they are "Adventurmobile-man!" who had some "awesome" mountain biking and "gnarly" kayaking, while chasing down deer in the woods with his AWD wagon.

Who are we kidding here?  And let's face it, other than a few hard-core off-road jeepers, the rest of use are not going to go much further off-road than a logging trail, which your Mom's Crown Vic could handle in terms of ground clearance.   And part of respecting the wilderness is not driving all over half of it.   But again, that sort of thing is more popular out West.   Back East, well, we worry more about running over turtles on the beach and soil erosion in the forest.   This illustrates how our politically-correct neighbors on "the coast" are often the least politically correct.

And yes, we do get "adventuremobiles" here on retirement island.   But for the most part, they don't seem to know quite what to do with their fussy and expensive gear.   Camping in a tent in 95 degree weather (and 90% humidity) is not exactly fun.   And you can't take your "trail rated" jeep off-road here.   Even if you did, there is little challenge in riding on sandy flat fire roads.  So they take the doors and roof off their jeeps (which apparently is a "thing" although I am not sure why) and then drive around and around.   Easier to just get a buggy.

So what's the point of this?  I dunno.   Other than you are deceiving yourself if you are calling your SUV an "adventuremobile" or thinking you are doing something new, original, or "expert".   You're just a dude who bought stuff, and buying things is not an adventure.  And moreover, you don't need an "adventuremobile" to have adventures.   This entire concept, I think, is a way for left-leaning people to excuse their desire for an SUV, by portraying it as some earth-friendly environmentally conscious woodsy adventure.

And hey, maybe there is no harm in that, but let's stop kidding ourselves here.  Because lying to yourself is rarely a sound proposition. 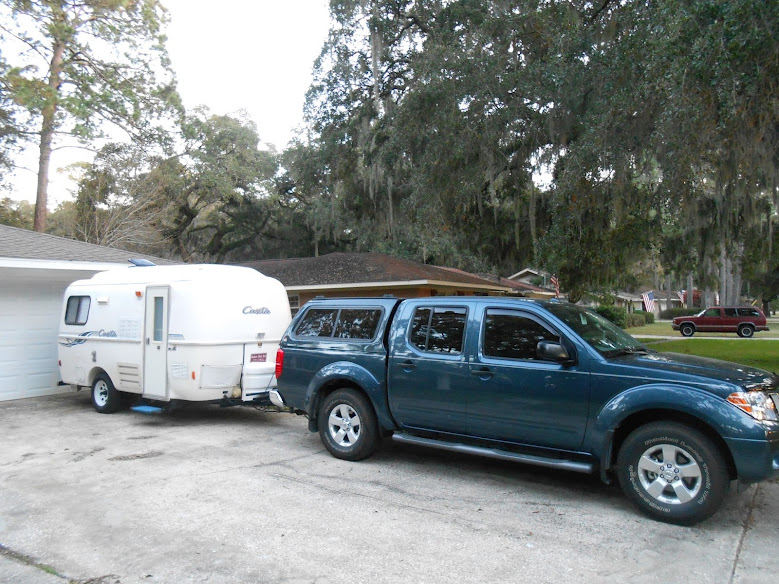 My "adventuremobile" has air conditioning, a refrigerator, and a flush toilet, and cost a lot less than some fussy "gear" from REI.   And no, I didn't have to make it out of an old phone company van or school bus.  And no, I didn't invent RVing, either!
Newer Post Older Post Home