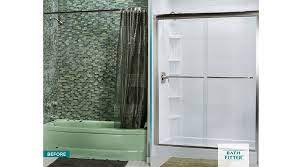 From rusty old cracked tub to shiny-new, all in an afternoon!  For such a low price!  Should you use this type of technology?  Maybe.  Maybe not.


A few months back I was in a hotel room and on the television were saturation ads for Bathfitters.  The premise was that you could call them, and for not a lot of money they would come out and redo your bathroom for very little money.  Note that there are many companies offering the same or similar systems, so I am not picking on one company here, but reviewing the underlying technology.

What they do is cover up your old tub and tile with a plastic (acrylic) enclosure and then install new fittings.  It makes it look shiny and new and contemporary, in a very short period of time (often within one day).    No hassle of sledgehammering up old tile and backer, removing rusty old tubs, struggling with old plumbing, dealing with dust and mess.   And it seems so much cheaper, too!

But while you are paying a lot less, you are getting a lot less, too.  Merely covering up old tile and tubs isn't the same thing as replacing them.   You are basically forestalling the inevitable, instead permanently fixing it.  And if not done right, you might be just wasting money.

I was in another hotel room where the hotelier had tried to use a similar technology (I have no way of knowing whether it was Bathfitters or a knock-off).   The tub was covered with a plastic layer, and the tile had a plastic enclosure put over it.   The problem was, somehow water got between the plastic tub liner and the original tub, forming a layer much like a waterbed.  It was kind of creepy to stand on, and the idea that there was stale old bathwater under there kind of creeped me out.

It got me to thinking as to what would happen if water got behind the plastic on the walls.  It might cause the whole thing to fail, over time.

This video shows how the tub "liner" is installed, with adhesive and butyl tape.

There are cheap ways to improve the look of an older bathroom.   A neighbor of mine had his tile epoxy-painted, which made it look new.   It was for the guest bathroom, so it would not be used often.   Our guest bath is original 50-year-old tile and tub, and still looks new - as it was rarely used.   Those old tile installations were done properly.  They would put up chicken wire on the walls, put on a layer of concrete, and then install the tile.   Today, they put up tileboard, which is like waterproof sheetrock, and then tile over that.  It works well, but since it is not a solid as concrete, it may be more prone to cracking over time.

The problem with the bathfitters type solution isn't that the technology is bad, although an improper installation can be problematic as I noted above.   The problem is, the pricing.   Since overhauling a bathroom can be so expensive, this "solution" seems so much cheaper, because it is less than half the price.   But even at half-price, it may be far more than it is worth.

The other problem is, after 30, 40, or 50 years, it isn't just the tub and tile that are wearing out.  Odds are you plumbing is shot as well.  The water lines, valves, drain lines, shower head, and whatnot are all ready to be replaced.  And some of these things can't be replaced without removing the tub.

Odds are, too, that the vanity and toilet are probably ready for an overhaul, and the tile on the floor is worn and cracked.   So yes, these bathfitter-type solutions may work for your tub and enclosure, but still leaves the rest of your bathroom to overhaul.

And while it may cost more money to do a complete overhaul rather than a cover-up, I think the additional "value" a bathfitter-type cover-up adds to your house is minimal.   In fact, if I was a home buyer and saw one of these cover-up type deals on a tub and enclosure, I would wonder, "Gee, what's underneath this?"

Remodeling, as I noted before, at best returns 50 cents on the dollar in terms of resale value.   But I suspect a cover-up job returns nothing.   It may, however, make the house look more presentable and salable, of course, unless like with me, it raises questions as to what else is being covered up.

Would I do a bathfitter-type remodel of a bathroom?  It is hard to say.  I would cross-shop with other, similar companies (if you watch the YouTube video above, you will see there are competing companies videos in the sidebar) and beat them up on price.   A new bathroom might cost $30,000 to install. That doesn't mean these types of cover-up jobs are a "bargain" at half the price.  I suppose it might be a good way to update a worn-out guest bath.