In 1948, Preston Tucker introduced a revolutionary car, with rear-wheel drive, an air-cooled, aluminum block, horizontally opposed engine, and a streamlined body that would revolutionize the auto industry. 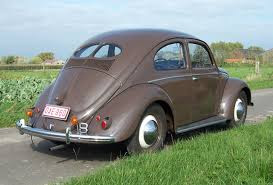 
In a previous posting, I mentioned offhand that many people like to make a saint or hero out of Preston Tucker and his quirky car.   It turns out that the car was really not that innovative or special.  In fact, one wonders if the idea of the car came to him after he saw Volkswagens after World War two or perhaps before.  Or maybe got the idea from the Czech Tatra 87 - another rear-engined aerodynamically designed car.

One thing is clear, though, the Tucker car was neither original or unique.  It used a flat "pancake" motor, in this case, a helicopter engine made by the Franklin Corporation of Syracuse, New York, which he bought as part of his scheme.   Franklin, like most aircraft engine manufacturers, was struggling after war as demand for aircraft engines plummeted.  It didn't help that Franklin's reputation was not the greatest, compared to Continental and Lycoming.

Some would argue that Tucker drove the Franklin company into the ground with his scheme - cancelling all existing aircraft contracts so the company could "concentrate" on building engines for his car.

But a flat-engine, aluminum block, air-cooled car? (Note: later converted to water-cooled, without much success).  Not really a "new idea" but one that Ferdinand Porsche and Adolf Hitler had in the 1930's.   And the parallels don't end there.   Many people like to tout the Tucker's "advances and innovations" which were really not innovations at all.   Fully independent suspension?  Again, the VW had this, and many German and European cars featured independent suspension well before the war.

The "safety" features of the car were laughable by today's standards.   Tucker put a large footwell in front of the passenger seat, with the idea that when an accident was imminent, the passenger could "duck" into this "safety zone" during the wreck.   The reality of course is, that accidents take place in milliseconds, and no one in a car has time to duck, brace, or otherwise react to an impact.  This is why we have airbags today.

Even the center "swivel" headlamp wasn't a Tucker innovation.  Again, the Czech Tatra had this feature and it was even available on US cars in the 1920's.  For some reason, people want to believe in Tucker and thus attribute these "innovations" to him.   But you can't "innovate" something invented by someone else, decades earlier.

So the Tucker wasn't a revolutionary design at all, really.  Maybe for the US his European ideas seemed "far out" but they were not inventions of his.

Where Tucker failed, Volkswagen succeeded.   And by the 1960's, VW had established itself as a player in the United States, and today is one of the largest manufacturers (sometimes the largest) in the world.  Oh, right, the "big-3" automakers were in a conspiracy to suppress the Tucker.  Funny how they let the VW slip right through their net!

And VW didn't have it very easy.  After the war, the ruined remains of the VW factory were offered to Ford Motor Company, who turned it down.  They literally had to start over from zero, to build up into the powerhouse they are today.   Tucker, on the other hand, had an entire factory nearly given to him for the asking.   No bombed out facilities to start from scratch.   And yet Tucker could not make a go of it, without all of these disadvantages that VW had.

In the car-starved market of the postwar era, one wonders why. Why not raise funds using conventional means - a stock offering, for example?  But instead, he relied to dealer franchises, and deposits on cars yet to be made - selling "future owners" radios for cars they would never own.

The story sounds familiar.   Whether a wild-eyed dreamer or a con man, the end result was the same - you can't develop a radically new concept car on a shoestring budget.  It just can't be done.  And even if the SEC investigation hadn't sealed the deal, odds are that by the mid 1950's or the 1960's at the latest, Tucker would have gone the way of Hudson, Studebaker, Kaiser, Frasier, Willys, Packard, Crosley, and a number of other small-time marques that eventually faded into history (including American Motors, LaSalle, Pontiac, Oldsmobile, and Mercury, among others).

So why do so many people want to believe the myth of Preston Tucker?  Why did Francis Ford Coppola make a movie about him?   And the answer lies in the question: Belief.   Belief can be an evil thing, blinding people to actual facts, hard data, and numerical analysis. If the Tucker car was such a great innovation, people would keep making them.  Recall that after the Studebaker plant closed and the company got out of the car business, the Avanti stayed in production for decades.  A number of people stepped up to buy the rights to make the car and made and sold them, which is more than can be said for the Tucker or the Bricklin, or any one of a number of "dream cars" that turned into nightmares.

Of course the punchline is that the VW Beetle was a horrific car - if you lived in that era you remember this.  It was tinny and cheap and was a deathtrap to anyone who drove or rode in one.  VW stopped making them because of this.  I have friends who have been injured or burned severely in VW accidents.   It was a very successful car because of its low price for the time.  But in today's litigious climate?   You could not sell a one.

So when you hear about "visionary dreamers" trying to sell commodities like cars, you have to wonder what the heck is going on.  After all, it takes millions, if not billions, to develop a new car, and this takes the resources of not one, but often two or three major corporations working in concert.  Consolidation of the car industry has been the result of this - the huge amount of money needed to R&D a new car.  And many smaller automakers are teaming with their opponents to develop niche cars, much as BMW had done with Toyota in development of the new Z-series car.  Or GM and Ford - collaborating to build a new generation of 9- and 10-speed transmissions.

Preston Tucker?  Not a man and his dream, but a man and a nightmare.   It is sad to see he went down this path, perhaps deluding himself that he could beat the odds and bring a car into production, with so little money to work with. And maybe he knew all along it wasn't possible, or at some point realized it wouldn't work out and went for the stock fraud instead.  Who knows?  The end result is the same.

But today?   What excuse do we, as investors or "depositors" have to be so naive?   It's not like we haven't been down this road before - many times!
Newer Post Older Post Home