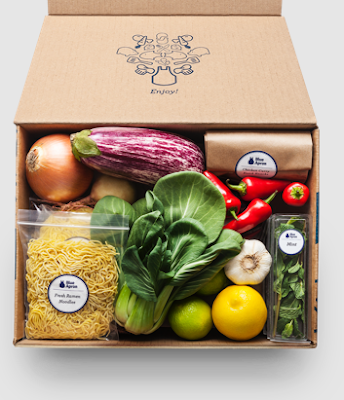 Are Meal Kits a good value?  Let's do the math here.


In a previous posting, I opined that meal kits were a sign of the apocalypse, at least a personal financial apocalypse for the individual.  A reader responded that they felt for $10 a serving, it was a "good value" and convenient.   And as I noted, you pay for convenience.  Even the Sooze agrees with this.

They also made the argument that since there were no "leftovers" they were saving money by not throwing food away.  But as I pointed out, if you buy enough ingredients to make four servings, well then you have meals for two nights, instead of one (freeze or refrigerate two servings for later, thus cutting your labor "cost" in half).

I analyzed before how much more cheaply you can make food at home versus a restaurant.  Using the ubiquitous "egg sandwich meal" as an example, I illustrated that the cost of the meal at a fast-food restaurant was about four bucks, whereas the cost of making it at home was less than a dollar - a four-to-one delta in costs.   Since I wrote that blog entry, food costs at the grocery store have actually gone down.   Eggs are almost half the price they were in 2014!

In an era of ultra-cheap groceries, why pay someone else to shop for you?

But I realized that doing the math on this was essential to showing how much the savings are.   So let's do that, using as an example, the Seared Chicken and Pasta Salad that is sold by Blue Apron.  I opined that we could save as much as 50% in costs.  Let's see exactly how much we can save.

(A reader notes that the banner ad accompanying my last posting on the subject was an ad for Martha Stewart's Meal Kits, which is ironic, considering my stance on Meal Kits and Martha Stewart!).

As I noted in my earlier posting, it is nice that Blue Apron provides the recipes for free, online.  But of course, there are so many free online recipe sites and discussion groups these days that if you can't find something to make, you aren't trying.   There are sites where you can type in what you have in your cupboard and it will give you suggestions as to what to make!  And there are even cookbooks at your local library you can check out for free.   Write down favorite recipes on recipe cards and keep them in a card box.  Mark has his Mother's and Grandmother's recipe boxes, and they are referred to frequently.  And he has a host of cookbooks he likes to use.   This isn't rocket science, really.   With a little effort and the ability to follow instructions, anyone can make a decent meal.

Here are the ingredients from the Blue Apron site, for the Seared Chicken and Pasta Salad.  Boy, that sounds a lot more fancy than cooked chicken and boiled pasta, don't it?   But that is what it is, really.

Total cost for two servings: $20
Since we have the ingredients list, we can go online and see what these items cost at the local grocery store.  Wal-Mart has a "family pack" of chicken breasts (about 11) which weighs about 4-5 lbs.   You can freeze the ones you aren't using for later use.  I could not find a price for those online, but they did have the "Sanderson" brand which comes three to a pack for about $3.48 a pound.  This seems kind of high, given that chicken breast at the deli is about $6.98 a pound, cooked, but let's go with it.  For two chicken breasts of 1/2 pound each (being generous) our cost is $3.48 for two servings.

The next item, Fregola Sarda Pasta, sounds exotic,  Surely they don't have that at Wal-Mart, right?  After all, all they have there is dented cans of peas and expired food items.  Think again, the world's largest retailer of organic produce has your fancy pasta - in two varieties.   $4.88 for 17.6 ounces.  They also have a fancier kind for over $20 a package.  According to once source, one cup of this pasta is about six ounces.  So if we use the regular pasta, we are talking $1.10 of pasta.  If we wanted to go to the pricey kind, it would be about $4.50.  I'm guessing that Blue Apron isn't giving you the pricey kind.

Now Garlic!  That's my thing.  I would add five bulbs of garlic, but let's stick to the recipe.  Again, the local Wal-Mart has garlic bulbs for $3.74 for 20 ounces or 18 cents per ounce.   The average garlic clove weighs 4-7 grams.  Let's assume 7 grams or about a quarter ounce.   Let's be generous and say an ounce, or 18 cents.  You should have this in your pantry all the time, by the way.

Lemons are hard to find prices for online, although I found this USDA site for food pricing.  SAM's club has a three-pound bag for $5.98 or about $2 a pound.  One lemon weights about four ounces or a quarter pound, making it 25 cents.

Summer squash according to this site, is about $2 a pound.  Walmart lists it for $1.25 each.  Let's be generous and assume $2 for one squash.

Parsley runs about 98 cents a bunch.   You should be buying this, along with garlic, every week anyway.  Note that for this recipe for two people, you likely will use only half a bunch, but lets' say a whole bunch, just to be fair.

As you can see, the savings are at least 50% if not more.  Is this a lot of money?   Yes, it can be, over time.  Like a $3 Starbucks drink (or worse, a $5 one) it adds up.    If you spend $20 on a meal for two, three times a week, that comes to $60, or $30 (at least) more than you would have spent at the grocery store.  That comes to $1040 a year, which over 30 years at a paltry 5% interest, could be $108,826.83 in your retirement account - or enough to retire a two or three years early, which you may be forced to do later in life.
"But Bob!" you say, "This saves me a trip to the grocery store and I'm so busy!"    Well, first of all, you aren't all that busy, you just watch too much television.  Second of all, you go to the grocery store anyway, so what's the big deal?  You just have to buy a few more items - it takes 10-15 minutes tops.
The real deal is, of course, that people can't figure out what it is they need at the grocery store - they basically can't take care of themselves.  They are super-busy at a $100,000-a-year job, but they can't plan a meal and make a grocery list.   They are helpless as kittens.   And when you are helpless, you will get fleeced, financially, over and over again in life.
So take five minutes out of one day a week and make a meal plan and a grocery list.   This analysis was just for three meals a week, the basic "plan" of Blue Apron.   Think about the savings if you made most of your meals at home - and ate out at restaurants far less.   You'd have hundreds of thousands in your retirement plan.
Note that I am being generous on pricing here.  If you buy in bulk, seek out bargains, you may be able to halve this cost.  We find that "store brand" butter is just fine, as are a lot of other "off-brand" items.
Note also that once you start cooking at home, a lot of these "ingredients" will always be in your pantry, so you don't have to "shop" for them.   And if you are missing an ingredient, you can improvise with what is at hand.  Real cooking is based on making something from what is at hand, not finding a list of ingredients and making a "recipe".   French Cuisine - indeed most cuisine - was based on making something from ingredients, often cheap ingredients, that people had on hand.  That's why they perfected sauces.
Sadly, most people don't see this.  They see $60 a week as "not a lot of money" and think about the bill at the restaurant they ate at last week.  Hey, three meals for the price of one restaurant meal!  Such a deal, right?   It is the same sort of ersatz mathematics that people use to lease cars.  Hey, for the price of buying a Camry, I can lease a Lexus!  This has to be a better deal, right?
Wrong.  When you look at the overall costs of the transaction, and the costs over time, it adds up.   And a lot of people who think they are "making good money" and thus "can afford it" will find out, later in life, that that six-figure paycheck was a fleeting thing, and once they round the bend on age 50, no one wants or needs their antiquated job skills.
By then, it is too late to think, "Gee, I wish I hadn't blown money on stupid things like meal kits!"
Way too late.
UPDATE:  Some might argue, "Well, I'm really rich and I can afford meal kits!"   And maybe this is so, although if you were really rich, you could afford your own live-in Chef and you don't soil your hands with "meal kits."   The point is, few people can really afford to squander this much money, so the idea of meal kits being "The Next Big Thing!" is a little overstated.   There are only so many clueless upper-middle-class people who think they can afford this, and no barriers to entry in this marketplace.   In addition to Blue Apron, we have good old Martha Stewart, and now Amazon throwing its hat in the ring.   Before you invest in stock in these things, ask yourself, how many meal kit companies can the market support?   Not that many, to be sure!
Newer Post Older Post Home