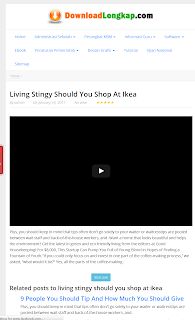 The structure of the Internet and Internet Advertising results in some odd consequences.


I received an interesting e-mail the other day which exposed me to the seamy side of the Internet, which, let's face it, has a lot of seamy sides:

After doing weeks of independent research about all available brands of portable air conditioners, we published the results in a blog article. Please note: we are in no way connected to any of the brands, we are just a blog with a passion for art, design and everything to do with home.

Here is the article: http://******/the-best-portable-air-conditioners

It reflects a summary of the feedback from people around the world - I'd love to know what you think!

Feel free to send your thoughts by email, or, if you prefer, you can also leave your thoughts in the comment section at the bottom of the article. And if you like the article you would make us very happy with a mention on your website :-)

Best wishes and thank you,

I went on the site and was appalled by the article, which had so many factual errors, it wasn't funny.  The "reviews" of portable air conditioners appeared to be little more than recitation of their specs. Unwittingly, I wrote back to the "author" of this piece and acted as an unpaid fact-checker and proofreader:

These two paragraphs are confusing in describing how these units work:

"Single hose units will pull the air from within the room, cool it, and send it back into the room. It then vents warm air and moisture out of the outtake hose that is mounted to the window with a simple removable frame. With single-hose units, this is where auto-evaporative technology helps keep the machine running efficiently by cooling the unit. For less consistent use, like in locations with warm afternoons and cool evenings, a single-hose air conditioner is generally sufficient."

(when cold air passes over the evaporator coils, it falls below the dew point, causing water to condensate onto the coils.  This drips down into a drip pan.  In a house A/C unit, this would then drain outside via a hose.   In older portable A/C units, the drip pan or condensate pan would have to be emptied on a daily or even hourly basis, depending on how humid the environment was.   Modern units use the edge of the evaporator fan to splash this water onto the warm components such as the compressor, causing it to evaporate again, at which point it gets blown outside with the discharge air.  Some window units use this technology as well.  It also does serve to cool the compressor somewhat.  But that's not the point!  The point is to avoid having to drain the damn drip pan all the time!  Even with this technology, the drip pan may need to be emptied when the room is first cooled, before the humidity level is pulled down.  Once the room is cool, the need is less, which is why it is a good idea to leave these buggers on all the time, rather than try to turn them on and off during the day).

The problem with single hose units is that they are taking air from the room and discharging it outside.  You are taking the cooled air, using it to cool the condensor, and then discharging it.  This is less efficient.   But worse than that, if your home is tightly sealed, the fan discharging air may have to fight to push air out the hose, as there is no air coming into the room.  For this reason, they often recommend opening a window a crack to let air in, which again, negates efficiency.

"Double hose units have both an intake and an outtake house. Air is pulled into the interior intake (the unit itself), cooled by the coils, and then sent back into the room. As the machine warms up, the intake hose (hooked to the window) brings air from outside in order to keep the unit from overheating. The outtake hose then removes the heat and moisture just as it does for the single hose systems. In larger spaces or spaces filled with computers or other warm electronics, the two-hose system is ideal for optimum cooling and to ensure the longevity of the unit."

Again, this seems to illustrate that you have no fundamental idea of how air conditioning works.   While I suppose you could say this is technically correct that it "prevents the machine from overheating" it is really not accurate.   An air conditioner is a heat pump - it moves heat from point A to point B.   A reversible heat pump can pump heat in both directions, so it can heat or cool.

When you run an A/C unit - ANY KIND of AC unit, you are rejecting heat outside of the room.  The point of these ducts is to reject the heat (hot air) in this case, which is generated when the refrigerant is condensed in the condenser.   This is where a lot of people get confused about these units - they think you plug them in and the unit turns electricity into "cold".   No, it takes the heat out of the room and pumps it outside.   If you don't connect the ductwork, you are just pumping heat around in the same room.   The two-hose solution is more efficient than the one-hose solution, as you are using OUTSIDE AIR instead of INSIDE AIR to remove the heat.   So you are not cooling air (as in the single-hose unit) and then blowing it outside.   It has nothing to do with "overheating" but rather improved efficiency.

The ducts don't prevent the unit from "overheating" but allow the unit to function.  These units don't really "overheat" by the way, they would shut off if the flow of air to the condenser was blocked (the high pressure refrigerant switch would kick off).

All of the bolded statements in your article above are inaccurate.  I bring this to your attention in that you don't want to make yourself look foolish online.

A few days later, he wrote back:

Thank you very much for your reply and your feedback, that is very kind and helpful!

I full agree with everything you said there. We broke the contract with the copywriter who wrote this for us as after further inspection I agree the text is unclear and factual wrong in many ways. I now have my main copywriter reviewing and correcting the article (luckily she is amazing) and I will let you know once this is done. Thanks again for sharing your opinion, this is super helpful.

Copywriter?   What the Fuck is going on here?  Welcome to the wonderful world of shit-blogs and Internet Click-Bait filler sites.

What are these sites?  They are the weird sites I have written about before, often containing scraps of text in broken English.  Sometimes they even incorporate postings from my blog - or copy my entire blog.   Others are articles so poorly written and lacking content and point-of-view.  For example, you might see one on auto leasing that sounds like this:

"Leasing a car is often a good value for some car buyers.  Others prefer to buy cars in the traditional manner.  There are advantages to both approaches.   People who lease cars like the convenience and prefer to trade-in every few years.  When you lease a car, you may be asked to sign a lease agreement and make a down payment.  Then, every month, you make a lease payment on the car....."

In other words, it is bland, inoffensive shit that really says nothing at all.   But if you search on "Is leasing a car a good deal?" this page might come up.   You click on it and the page owner makes a penny - or a fraction of a penny.   A million people click on it, he makes a few dollars.   If he has hundreds of pages and blogs like this, he might make enough to live on - in a third-world country.

What's the problem with shit-blogs?  Nothing really, other than they are the wad of paper towels clogging up the toilet of the Internet, causing shit to overflow everywhere, and someone has to clean it up eventually.

But this is a prime example of how people have so easily spoofed Internet Advertising, something I did not realize myself until I monetized this blog (which this month, made about $237, I'm rich!).  If you can create content that generates clicks, you make money.   How do you do this?

1.  Create controversial content:  My posting on RV Quality is controversial and gets a lot of clicks.  My posting on Fibromyalgia gets a lot of hits as well.   My recent Elio posting went ballistic when someone linked it from Facebook and Reddit.  The Elio "true believers" click twice as much as the skeptics, illustrating how they lost their $1000 deposits in the first place.

2.  Spread the word:  My most popular posting is on insulating your garage door for cheap which several people posted on Pinterest (thanks, guys!) and thus it gets a lot of hits.  Ditto for my Park Model posting.   Some people intentionally go out to discussion groups and cross-post to their blogs or sites, hoping for more clicks.

3. Create topical content:  People want to know about portable air conditioners (another one of my popular postings) or car leasing or getting mortgage, buying a home, getting out of debt, etc.   Write something about this or other topical content, even if you have nothing to say, and you will get clicks.  SEO (Search Engine Optimize) your postings, and watch the dollars roll in!

4. Political Content:  As the last election illustrated, people will click on "red meat" that disparaged Hillary.  Not so much on Trump, but I do note that some of my highest paychecks from Adsense were before the election when I made some political postings.

Again it doesn't matter if you are vilified or lauded.  In fact, the former is better than the latter.  People will click on a link on "Fibromyalgia Sufferers Page" when somene says, "can you believe what this asshole said?  He's implying our suffering isn't real!" and they all get their pitchforks, say awful things about me and then click on the link and make me money.   That was an interesting lesson for me about how the Internet really works and why outrage these days is a better internet currency that Bitcoin.   Bitcoin exchanges might crash, but outrage is money in the bank!

Which is why I say that being outraged is stupid and just profits other people so stop doing it.

It isn't hard to do, the question is, do I want to do it?   The reason these folks from third-world countries figured out how to spoof Google AdSense is that they desperately need the money.  They set up a site, generate some hits, make a few bucks and can then buy one of those three-wheeled tuk-tuks (which actually exist, by the way).   Who am I kidding?  Some kid in Macedonia is probably buying a new Mercedes with his click-bait money.

Google AdSense and other online advertising companies are clamping down on a lot of "fake news" sits and shitblogs.   But for advertisers, a click is a click, and a sale is a sale.  And people foolish enough to click on a shitblog sidebar ad are probably prime meat for them as they have already demonstrated gullibility.  This is why Bezos advertises on Breitbart.  Politics are fine and all, but money is money.

In a way, this is sort of a "brave new world" kind of thing.  You can post crap online and get paid for it.  Maybe you'll even become famous or at least internet famous and make a few dollars at it.   It is a more egalitarian system than in the past, where editors, producers, studios, publishers, and newspaper owners were the gatekeepers, keeping outsiders from putting up content, back in the days of paper and film.