Should You Start A Religion? 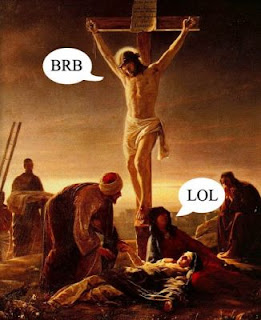 Starting a Religion Can be Hazardous to Your Health!

As I noted in my First to Market, Last in the Marketplace posting, being an innovator is fraught with hazard.  After all, look what happened to Jesus!  In most cases, people who found religions come to hard ends.  Joseph Smith, for example, was murdered by a mob which didn't take lightly to newcomer religions.  And of course Jim Jones didn't fare so well, either.  Mohamed lived to be 63 and apparently died of natural causes, but a number of his early followers were killed or tortured.  Even Buddha was subject to attempts on his life!

And of course, the real earthly rewards of a religion are rarely received by the founders.  L. Ron Hubbard created the religion of Scientology, but it really didn't turn into the international mega-business that it is today until long after his death.  Talking about missing the sweet spot!

No, starting a religion is never a good deal.  But being the second-to-market, in terms of taking control of a religion, controlling the religious message, and managing a religion once it starts to take off (and the founder is safely in the grave) is not such a bad bargain.

Through the ages, religious leaders have managed to amass incredible wealth and power at one time or another.  Various Popes, controlled huge amounts of wealth and steered countries.  Monks amassed great wealth in their monasteries in England, until the King had them all killed or imprisoned and seized their lands.   Smarmy television evangelists amass millions, most of it tax-free, as they fly around the world in private jets, "spreading the gospel".

Founders of religions may take vows of poverty, their successors often do not.  And in fact, the religious message is usually hijacked by later religious leaders towards earthly ends, not spiritual ones.   They want you to hand over money, fight in a war, or do something else against your own self-interest all in the name of God - even if their ends often contradict the teachings of the religion's founders.

And of course, in any religion, there are power struggles, which are characterized as theological schisms.  The Protestant movement wasn't so much about religious dogma, but a move against the centralized power of the Catholic Church.  The Church of England (what we call Episcopalians here in America) was founded based on a difference in religious belief - that belief being whether the Kind of England or the Pope should control the church.   It was less a divide based on religious orthodoxy than on raw power.

And as each new branch of each new religion is formed, new power-brokers emerge to take charge, and usually these power-brokers are not the founders.   Martin Luther may have nailed his 95 theses to the church door, but he never was able to cash in on any church bling.

So if you really want to cash in on this religion bag, my suggestion isn't to start one, as that never makes any serious coin for the founder, and may in fact, result in your demise.   Instead, find some incipient religion that is just starting out, worm your way into its good graces, and then slowly advance up the hierarchy (which is easy to do, as it is a small religion) until you run the place.  Then Profit rather than Prophet.