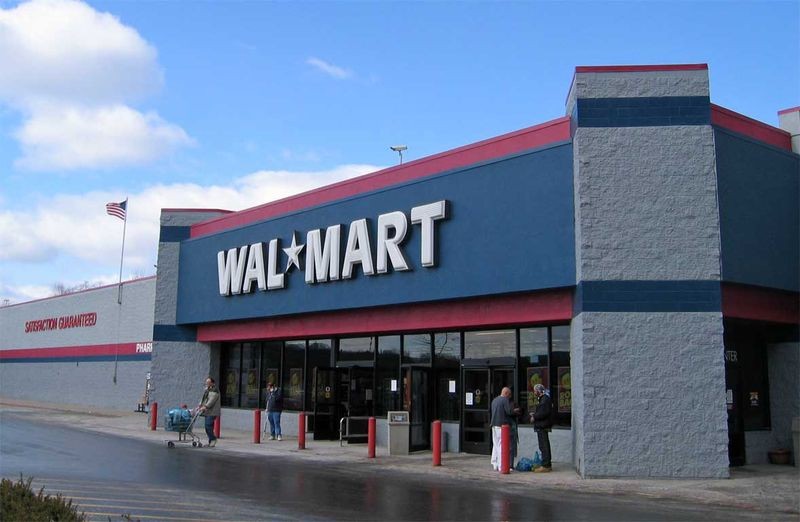 Yes, Virginia, Fake News exists - and both sides of the political spectrum are pushing it.


A recent article in The Guardian is laughably biased.   In case you missed it, The Guardian is a British tabloid newspaper which caters to Britons' desire to find fault in America.  Oh, sure, the Brits are our "allies" and we bailed their ass out in two world wars.  And they have utterly fucked themselves with this Brexit thing, and have a leader who is only one notch or two shy of being a Donald Trump herself.   But they love to run down America as some sort of Dickensian place where children starve in the streets and people die from lack of a "national health" service.

And The Guardian plays right into this narrative.

The article is hilarious in many ways.   It discusses a tiny town in coal country that lost its Walmart, and how Walmart's leaving "devastated" the area.   But of course, it was the demise of the coal industry that caused the devastation - the county going from a population of 100,000 to 18,000 in the last few decades.

And of course, The Guardian is the kind of paper that decries when a Walmart opens (which they do in this article) playing that same old trope about how awful it is that Walmart competes in the marketplace and "runs small businesses out of town" or some such nonsense.   So Walmart is the villain for moving to this rural community and a villain again, for leaving.

It is only when you get deep into the article that you read that the Walmart in question moved into an site abandoned by K-Mart.   In other words, one "big-box" retailer was replacing another.  And speaking of "big-box" they make it sound as if that term and concept itself was somehow evil in an of itself:

"Peep into the glass doors of the front of the store and you can start to appreciate the brutal simplicity of the Walmart concept.  There is nothing inside its windowless walls, just 103,000sq ft of air.  A Walmart supercenter is no more, no less than the name implies: a big box, an empty stage on which to wave a magic wand and summon up a million retail dreams."

No use of high-index words here, is there?

Once again, we are treated to what I call, "Flint, Michigan Syndrome".   There are jobs to be had all over America today, but you have to leave depressed Appalachian coal mining towns to find them.  Most of the Walmart employees were offered jobs in other stores, but one person interviewed didn't want to "drive an hour one way to commute" to another store or actually move there.   One person was "forced" to move over 300 miles to Myrtle Beach to work at Walmart.   Forced?   Leaving depressed mining towns for a resort area is a smart move not a personal tragedy.

The folks on the left (who are quoted in the story, including, yes, Bernie Sanders) posit that people have a right to live wherever the hell they want to, and jobs and services should be brought to their door.   Sorry, but no sale to that.   You move to where the jobs are.   The rest of us have to do that, why are people from West Virginia or Flint Michigan exempt?

What I thought was really funny, though was you could take this article and cut-and-paste it with some British references and it would be equally as asinine.  Just replace "West Virginia" with "Wales" (their version of impoverished backward Appalachian coal mining country) and "Walmart" with "Tesco" - their version of the big-box store.

"When Tesco left town, it didn’t linger over the goodbyes. It slashed the prices on all its products, stripped the shelves bare, and vanished, leaving behind only the ghostly shadow of its famous brand name and logo on the front wall of a deserted shell.

The departure was so quick that telltale signs remain of the getaway, like smoldering ashes in the fireplaces of an evacuated town. [wtf??] Notices still taped to the glass entranceway record with tombstone-like precision the exact moment that the Tesco was shuttered: “Store closed at 7pm, Thursday 28 January 2016.”

Ten years. That’s all the time it took for the store to rise up in a clearing of the lush forest of Welsh coal country and then disappear again, as though it had never been there."

Hey, this is fun!  And wow, what great imaginary and use of high-index words!  But it ain't journalism.  It is left-wing propaganda.   According to the article, the problems of impoverished Appalachia (which have been going on for over a century) are now Walmart's fault - at least in part - for having the audacity for opening a business and again for closing it when it was losing money.  Not only are they responsible for jobs lost, but the very diet and health of the residents there:

“There’s a lot of people getting sick since the store closed because they’re not getting the right diet. It’s sad to me, but bad food is cheap.”

Nicole Banks is the first person in her family to go to college. With a [useless] degree in sociology, how would she sum up the impact of Walmart leaving?

She pauses to think for a while, and when she replies, she does so with unexpected vehemence. “It’s ridiculous,” she says. “People round here can’t get healthcare, they can’t get jobs and now the good food has gone. We are not getting our basic needs met. People are dying young.”

Banks is not exaggerating. Of the 3,142 counties in the US, McDowell County comes in at No 3,142 in terms of life expectancy. For men, that’s 64 years, a statistic that, as Bernie Sanders likes to point out, is the same for men in Namibia.

Clearly, such endemic health problems cannot be laid exclusively at the door of Walmart. But for Sabrina Shrader, a community organizer who was born and bred [sic - this is West Virginia] in the area, it provides the context for understanding the effect of the corporation’s decision, and that of its controlling family, to pack its bags and quit.

“The Walton family are billionaires,” she said (also no exaggeration – their collective worth is put at about $150bn). “They developed a system that just made us worse off, and then they took even that away from us.”

You see, Walmart is now a charity and according to "activists" should keep open stores in areas with declining populations, no incomes, and no jobs, just because they should.  And while Walmart provided low-priced food for residents, no one will shop at the remaining mom-and-pop grocery store because it is "too expensive".   Walmart is evil because of low prices that drive "mom and pop" stores out of business.  And now they are evil for leaving, forcing people to shop at..... the overpriced "mom and pop" store.   Logical consistency has never been a hallmark of the left, it seems.

"Clearly, such endemic health problems cannot be laid exclusively at the door of Walmart."  - think about that for a second.   It is Walmart's fault for putting up a store where Kmart failed, but of course, not the fault of the nearby McDonald's for selling fast-food (they do have salads, of course, but no one ever orders that, right?).

And the low life expectancy has to do with Walmart not selling green vegetables anymore.   Not related to black lung and other mining illnesses.   Nothing to do with the meth epidemic (and now opiate epidemic) ravaging West Virginia.   No, it all has to do with green veggies and Walmart.

I hate to break it to you, but I shop at Walmart, and even with the availability of fresh vegetables, the poor are the ones filling their carts with 2-liter jugs of orange soda-pop, bags of chips, and frozen pizzas.   Even when they have access to a Walmart, the poor buy shitty food.   Sorry, but no sale to bullshit.

The entire premise is ridiculous.   But it plays right into a social and socialist narrative - that money-losing businesses should be kept open (like the coal mines in the UK, pre-Thatcher) just so people have a place to go and something to do.  It also panders to the British need to run down the USA, as well as the need of some liberals in this country to constantly find fault with it.

The Trump administration was elected using real fake news in the form of internet rumors from sketchy websites (that made a lot of money for their owners).   They then turned the entire concept on its head by calling the real news outlets, "fake news."

But with "news stories" like this one in The Guardian, it becomes easier and easier to argue that (dare I say it?) Trump is right, or at least every news outlet in the world has now just given up any pretense of neutrality and has gone straight to propaganda.  The Guardian or Breitbart, same shit, different day.   Slanted propaganda posing as news.

Sadly, this is the sort of shit that will get Trump re-elected.   The so-called "Progressives" today want nothing less than a communist overthrow of our government and a switch to a socialist state where our every decision in life is made for us by big government.   Not only is is a bad idea (as proven in every country that has tried it, including the UK) it never will happen in the USA.

This same county being profiled in this left-wing piece also voted for Donald Trump - by 74 percent.  The folks here are not going to vote for Bernie Sanders, even if a "community activist" and a young woman with a worthless "sociology degree" think otherwise.  Anyone with half a brain has already left this hell-hole for greener pastures.  The folks that remained, well, are not the brightest bulbs in the chandelier.  But likely many of them will leave too, rather than wait around, Flint-style, for "the jobs to come back!"

It is just sad that people think this way - feeling sorry for themselves and positing themselves as "victims", while living in the wealthiest country in the world, with a booming economy, low unemployment, low interest, and low inflation.

If you aren't happy with this, nothing in this world will ever, ever make you happy.