Do you want a Platinum Card? 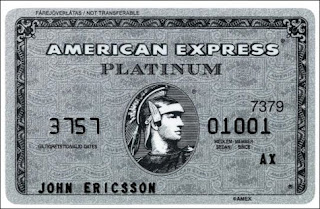 Status Credit Cards are marketed as being the indicia of wealth and sophistication.  And yet many folks in the trailer park have them!
The other day, I was perusing this "Debt Guy" website and saw this posting, from a lady who is in over her head with a Platinum card.   And not surprisingly, like more than half of all debt issues in this country, it was related to illness.  So this poor lady has gone from being a high-flying "platinum card holder" to having her wages garnished.  It is a very sad story, among many on his site.

As I have noted before in this blog, status sells, and no one knows this like the credit card companies.  So they sell Silver, Gold, and Platinum cards, and having run out of metals, switched to minerals - with diamond cards, etc.  People talk in hushed tones about the fabled "black card".  Ooooooh! To have one of those!

(Amex used to have a gag that their cards didn't have "credit limits".  But this didn't mean you could go out and buy the Queen Mary with your Amex card.   If you tried to charge too much, the card would be declined, of course.  There was a limit, they just didn't tell you what it was.  Their "no limits" campaign was just a gag.  For that and other reasons, as noted below, I no longer have an Amex card).

Does having one of these cards mean you are "special" or wealthy?  Hardly.  One reason for the metals escalation in card types was that just about everyone had a "gold card" and they had to come up with newer levels of status so that people could distinguish themselves (in their minds, anyway) from the hoi polloi.  So now we have Platinum, Diamond, and I guess Uranium will be next (it glows in the dark!).

But like all status-seeking, it is the pursuit of a false religion, and also an excellent opportunity for you to get fleeced.  Many of these cards have high interest rates, and thus are bad bargains.  When you get a letter in the mail that says "Congratulations!  You have been approved for a Visa ZINC card!"  Just toss it in the trash.

One gag being played out in the ad pages of the New Yorker is a new Visa preferred card that supposedly will get you special reserved seats at a concert, or other "perks" that are not related to the basic loan agreement that is a credit card.  Once again, we are encouraged to sign up for a 14% to 25% APR in order to get some sort of ancillary bargain - frequent flyer miles, bonus dollars, or preferred seating at a concert venue.

The problem with all of these "perks" is that you are paying for them in terms of interest rate.  You would not get a car loan at 14% interest because they give you a free toaster, would you?  And yet, in effect, that is what many people do with these "perks" cards.

A loan is a loan, and a credit card is a debt instrument, plain and simple.  You may SAY you are going to pay off the balance every month, but all it takes is one missed payment, and that "free" flight to Duluth (retail value, $99) just cost you $250 in interest payments.

American Express, shown above, bears special mention.  My foreign clients are always amazed that in America, many stores don't take American Express, and moreover that most Americans don't carry the card.  They assume that an American Express card is issued at birth - like a Social Security card.  After all, it has the word "American" in it, right?

But today, in the USA, Amex is just another credit card.  And for the basic card, there is one kicker - you HAVE to pay off the balance every month.  And if you don't, well, all sorts of fees, etc. kick in, and life gets bad in a hurry.  Amex now offers more traditional revolving-credit style cards, as they realize that this interest game is a lucrative one.  But I dumped my Amex corporate cards a long time ago, when I realized that they were just a temptation to spend, and moreover, just a status item (and more and more stores didn't take them, due to the fees involved).

I had a business line of credit with Amex, and I realized quickly why the credit card companies are not your friends.  To make payroll one month, I used the Amex line of credit - or tried to.  The check I wrote on it bounced at the bank, causing all sorts of havoc.  I called Amex, and they explained that their computer decided to cancel my line of credit - but they failed to tell me about it (the letter was in the mail, they explained).  So I had to spend the afternoon chasing bad checks all over town, which of course was great for my credit rating.  Needless it say, it will be a cold day in hell, before I ever do business with those folks again.

But in a way, they did me a favor.  Minor fiascoes like that were a wake-up call that perhaps the debt model of doing business was not a good one.  Many economists argue that debt is a good thing, which allows businesses to operate.  But when you are reliant on debt to run your business, you have to beg your creditors for money on a daily basis to keep the business afloat.  You pay off one debt, and because of the interest payments, you can't accumulate wealth, so you end up taking on more debt, and the cycle continues.

If a creditor pulls the plug on the debt, the business quickly folds.  And during the recent recession, this happened to many small businesses - businesses that were "making money" and paying their debts obligations, but suddenly found the well dry when the banks cut off their lines of credit.

Debt is debt, and it is not a good thing, as economists claim, but a bad one.  Our entire society is programmed to run on debt, to keep people in debt, and to never get out of debt.  And in some regards, the debtor comes out "ahead" in some cases.  If you are perpetually in debt, no one can sue you, as you have no assets to attach.  And if you are perpetually in debt, you qualify for government relief.  In a way, it is a pretty sick deal.

But I digress, once again.

Real wealth is not found in the kind of credit card you qualify for, or in how high your "credit score" is.  Such things only indicate, roughly, your earning power, not your accumulated wealth.  The truly wealthy don't need credit cards or credit scores.  And if you really want to be truly wealthy, you need to get it out of your head that getting a "platinum card" is an accomplishment or a favor the credit card companies are granting you.

If you have to have a credit card,  get one with the lowest interest rate possible.  I have a Citicard with a 5.8% rate and a Capitol One with a 7% rate.   One of these will go away shortly.  These are reasonable interest rates, so that if I have some unexpected bill to pay (hospital stay, etc.) I at least have a shot at paying off the balance.  Again, a credit card is a debt instrument, so negotiate the best terms on it as possible!
Newer Post Older Post Home