Do You Need A Toy Tractor? 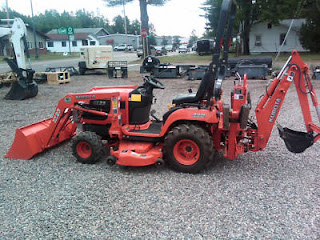 Many suburbanites spend tens of thousands of dollars on toy tractors like this, so they can maintain their mini-estates. However, the allure of playing pretend farmer wears off quickly, and these toy tractors are often not very functional, other than as glorified lawn mowers.
Do you need a toy tractor?  Tractors like the one above can cost well over $20,000 new, some over $30,000.   Even used, like the one above, they sell for $10,000 to $15,000 - a staggering amount for a lawn mower.   This is enough to buy a really nice car, brand new, or two good used ones.  Put in your IRA, it would be worth $100,000 to $200,000 at retirement.  Applied toward your mortgage, it could easily shave 5 years off the repayment terms.

Are these toy tractors are good value?  I think not and let me tell you why.  To begin with, the idea of playing country gentleman farmer with one of these is a pure fantasy.  They are lawnmowers, plain and simple, with scaled down "real tractor" implements.  How much dirt are you going to move with that tiny front-end loader?  You might as well just shovel the dirt.  Similarly, the backhoe attachment, while looking useful, is not going to go through anything but the softest of soils.  One good sized rock and that's the end of your ditch-digging project.  Better off just renting a ditch-witch from the local Taylor rental, if you want to dig a trench.

And once you attach these implements to this lawn mower, mowing the lawn suddenly becomes difficult.  If you mow close to the house, expect to whack something with the front end loader, or hit a tree with the backhoe.  So you end up removing these implements, which sit in your side yard, rusting.  And since they are such a pain in the ass to hook up, well, you end up not using them, anyway.

So the fantasy of "doing yard work" with one of these things remains just that - a fantasy.  And let's face it, what kind of yard work are you going to do that requires a front-end loader and a miniature backhoe?  If you are going to be a farmer, great.  For the 30 grand you blow on a toy tractor, you can go out and buy the real deal, with full-sized attachments.

When we bought the lake house, it came with five acres of lawn.  We thought about buying one of these toy tractors, but after looking at several, we came to the conclusion that (a) they were staggeringly expensive, (b) despite their reputation for quality, these could be staggeringly expensive and complicated to repair, and (c) we could hire a local fellow with a real backhoe for the five occasions we needed one, for about 1/10th the depreciation cost on one of these toy tractor jobs.

And we finally came to conclusion (d) you don't need or want five acres of land to mow, maintain or otherwise care for.

The toy tractor craze really took off in the late 1990's and peaked about 2005.  Since then, it has been harder and harder to find people with that kind of money to squander on what are essentially status toys.  Like the Grand Turbo Gas Grill (the baddest gas grill on the block!) the toy tractor ends up being just the baddest lawn mower on the block, and the thrill of owning the baddest lawn mower wears off quickly.  Actually, past age 40, the thrill of owning anything wears off quickly.

So why do people buy this stuff?  Well, people want toys and they want to look cool and have status.  And the toy tractor can be financed for $299 a month, which seems "affordable" at first, until you look at the overall cost picture over time.

We did buy a tractor - a restored antique 1941 Ford 9N with a 6-foot mower, for about $3000.  Six years later, we sold it for..... $3000.  It held its value with little or no depreciation.  The same cannot be said for these toy tractors, which, like most new equipment, depreciate rapidly, about 50% in value every 5 years or so.  For dirt moving, we simply hired a local fellow, who, for a hundred dollars or so, would bring by his backhoe and move dirt when we needed it.


It was a lot cheaper than buying a $30,000 toy tractor and then selling it for $15,000 after five years.
We also bought a zero-radius lawn mower for about $3000 at the local home improvement store and sold it for $1500, losing only $1500 in the process.  So all in all, we got off cheap.  Had we bought the toy tractor, we'd be crying right now and the loss we would be taking.

But not mowing lawn at all is something I am looking forward to.
Newer Post Older Post Home