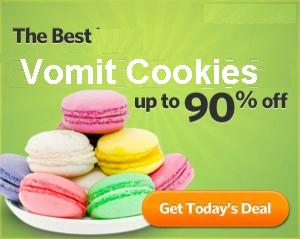 Internet Advertisements like to use arresting images to capture your attention.  Groupons uses these disgusting looking cookies to catch your eye.  If someone uses irrelevant but eye-catching graphics to snag your attention on the Internet, is it not a form of a lie?

You've seen the dude before.  It might be an ad for car insurance - "If you don't have a DUI, chances are, you are paying too much for car insurance!"  The accompanying photo is a disturbing image of a man who looks like a refugee from ZZ Top, with a long hair and a long beard.  What does this have to do with car insurance?  Nothing of course.

But it made you look!

And that is the premise of Internet Advertising - capturing eyeballs any way you can.  Simple ads don't work any more, so they use these animated ads with cutsy big-eyed kids dancing in circles.  Do you want to be a Forensic Investigator?  Nurse Practitioner?  Mall Security Guard?  Hey, the big headed, big-eyed kids all have little uniforms for their labeled professions!  Awwwwww!

Or how about "Obama wants Moms to go back to school!" which is accompanied by an animated GIF of two big-breasted women jogging.  Obama is apparently a breast man.  What does this have to do with going back to school?  Nothing, but.....MADE YOU LOOK!

(By the way, those ads are for "for-profit" schools, which will be the subject of another post). 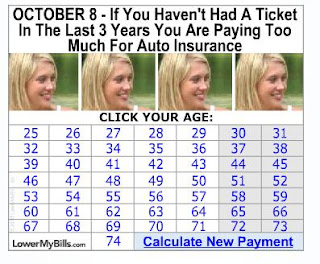 This animated Internet Ad features an arresting quad image of a blond lady. What does this have to do with car insurance?  Nothing of course.  But....made you look!


But most, if not all of these advertisements are for particularly odious and bad deals.  Anything advertised heavily is generally a bad deal.  Ads which use trickery are usually even more so.

Note:  see this link, for a list of "most annoying Internet ads of all time"

As I have noted before, any business deal that you get into that is predicated on a lie - even a small lie - is probably a bad bet.  So when you get an envelope that is faked-up to look like a government check - just to get you to open it - chances are, whatever they are selling in there is a raw deal.  They've already telegraphed what sort of sleazebags they are by faking up a government check to deceive you.  You have no business complaining when they rip you off utterly, later on.


"Mortgage Dancing Guy" appeared on Yahoo and other sites and was quite annoying and distracting.  What does this have to do with mortgage refinancing?  Do you think there is a "good deal" to be found here, when they use trickery and annoyance to get your attention?  I think not.

You see, those are bound to be raw deals, overpriced with junk fees and the like, and delivering substandard services.  If they were good deals, they would not need animated bouncing breasts and the invocation of the President's name to get your attention.

Human beings have a Pavlovian response, apparently, to certain images and phrases.  Arresting graphics or videos (bouncing breasts is always a sure winner, but so is rotating cutsey kids) will always draw our attention.  But so will certain phrases.

For example, "Moms" are often invoked in advertising.  "Invented by a Mom!" we see screaming across an advertisement, as if it were unusual for females who have had children to invent, much less have a job.  "Obama wants Moms to go back to school!" screams another, although, I don't think the President has singled out Mothers for special treatment. 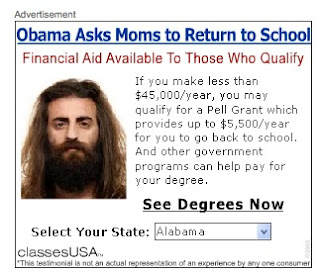 
The word "Mom" draws attention, possibly because of the emotional links it has to most people - even (or especially) orphans.  "Mom and Apple Pie" is the slogan politicians use - and not by accident.  "Obama" is apparently also a power-word, as it elicits strong emotions, both positive and negative.  The two words together? A sure winner!

Note how many of these ads sort of distort the truth by implying that they are part of some Obama-backed economic recovery program - that perhaps this is the slice of government cheese we have all been waiting for - a chance to go back to school or refinance our homes.  The reality is, of course, the school is an odious "for profit" school that wants you to take out student loans, and the refinance ad is just for an aggregation site that links to you actual lenders (and gets paid for the referral).

This image, from a weight loss ad on facebook, is none too subtle.  The context was "foods that are bad for you" which apparently includes bananas.  But this lady doesn't seem to mind!


The news media knows that certain phrases elicit the Pavlovian response.  You may recall a few months back, CNN and the other idiot news outlets were all abuzz about the "Tot Mom" - whatever that was.  I made it a point NOT to click on those links or read about the story, so I can't really tell you if it was a very underage mother or the mother of a "tot".  Both "Tot" and "Mom" are Pavlovian response words, which together not only scanned well, but caught eyeballs.

But they had a field day with it, and for months it was "Tot Mom" this and "Tot Mom" that.  And you wonder why I don't watch the mainstream media.  Some story about someone's personal tragedy, I guess, but they think we all need to hear it, as if it were "news" outside of the trailer park or whatever sort of hovel it occurred in.

Apparently we like hairy people - and we like to watch people dance.  So dancing Sasquatch is a no-brainer, right?  If you refinance through a company whose logo is a dancing Sasquatch, you are an idiot, period.

But News today is all about selling eyeballs - just like advertising!  So they use these "hooks" to get you sucked into a story.  It doesn't matter if it something you are interested in, or something that will outrage you. They want to hook you, they want to BAIT you, and they want to sell you - or your short attention span - to the highest bidder.

Other Internet ads use other high-index words to capture your interest.  Weight-loss scams abound on the Internet, and you've no doubt been annoyed by the "One trick to the tiny belly" or "Use this one weird old tip to get a tiny belly".  The words or phrases "weird old tip" or "tiny belly" tend to resonate and thus generate clicks.  But like disturbing homeless bearded man, they resonate in a bad way - it sticks in your mind like a bad advertising jingle - an earwig, as they call it.

And by the way, if you think clicking on such links is a swell idea, think again.  Yea, they are selling you a weight loss plan.  There is no "weird old tip" other than "give me all your money".

Here is an interesting variation - the grimacing old man image.  Apparently, our eyes are drawn to this for some reason.  The human brain is programmed for facial recognition (see my posting on Understanding Neural Networks) and is thus drawn to this image. The fact the man (or is it a woman? Androgyny sells, too!) appears to be in pain or unhappy (and how do our brains register emotions from appearance - and why? Think about it) is another distracting feature.  The net result is eyeballs, and hopefully clicks for their crappy mortgage deals.  Again, if you fall for this, you have no one but yourself to blame!


So is this a bad thing?  Perhaps it is merely annoying.  On the good side, it is a way of telegraphing a particularly bad deal.  If you see the bearded man, the big-titty jogging lady, the cleavage newscaster, the rotating big-eyed kids, the neon cookies - or any other arresting image designed to catch your eye - that whatever they are advertising is probably a totally raw deal.

If you just bear that in mind, these arresting images are no longer "annoying" but helpful labels in life.  You see them and think of them as warnings, like they way the rope off a hazardous area with police tape.  They should say to you, "Warning!  Raw Deal Ahead!"'

So in a way, they serve a useful purpose - a warning label, to the well-informed.


The perfect Internet Advertisement would comprise Obama in a Sasquatch suit, with long scraggly hair and a full beard, with large bouncing breasts, dancing in place - gyrating frantically, while holding some pink cupcakes "Made by a Mom!"  Sounds like a nightmare I had last night....
Newer Post Older Post Home