Borrowing is not a Privilege! 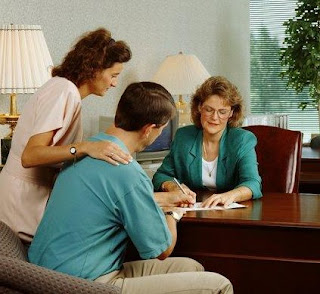 Borrowing is not a Privilege!  Of course, nor is it a right.

Note:  I will be traveling for the next two weeks, so this is my last entry until mid-November.


One interesting thing reading about other people's financial problems, such as on the Debt Guy Page is that many folks seem to obsess over their credit worthiness, their credit score, and view borrowing money as some sort of privilege.  They take an attitude of subservience, that I think dooms them from the get-go.  Please Mr. Banker!  Lend me more money!  Please Mr. Credit Card Company!  Increase my limit!  Please Mr. Car Dealer!  Let me buy this shiny car!

And it is that sort of attitude that sinks them, financially.  When you start looking at borrowing money as a privilege, as some sort of special treat, then you give up what little power you have in the transaction, right off the bat.  And people who take this sort of attitude often borrow money on the worst sort of terms - high interest rates, toxic ARM loans, payday loans, etc.

In the lending industry, charges of racism have been leveled, as most of these raw loan deals usually end up going to minorities.  This is not necessarily intentional racism, just the background racism, like background radiation, that permeates our society.  The poor often end up accepting crappy loan deals, because they are poor, uneducated, and unsophisticated about finances.  This, in turn, chains them into poverty, which in turn leads to more raw deals.  And since minorities are over-represented among the poor, they get these bad loan deals the most.

What sort of deals am I talking about?

1.  5-year balloon notes:  One lady on the debt site writes that she is refinancing her 5-year balloon note on her house, and wants to know how to pay off the debt before she "has to refinance it again".  This sort of thinking is interesting.  A middle-class or wealthier person would seek out a better deal - 30 year fixed rate at a low rate.  Refinancing every 5 years will result in huge fees being tacked on to the balance, meaning the person never pays it off!  It is like the lender in Thomas Wolf's Look Homeward Angel who, in the 1930's, lends poor southern blacks $20, which they "pay back" at $1 a week, which covers only interest, with the principle never being paid off.


2.  Buy Here, Pay Here:  In poor neighborhoods, really crappy used cars are sold based on weekly payments.  The car dealer is also the lender, and they charge double-digit loan rates on these clapped-out used cars.  Most never survive the term of the loan.

4.  High Interest Credit Cards:  Once a credit card interest rate exceeds 20%, the payback stretches out for decades, and the amount paid in interest dwarfs the principle.  These are not only horribly lousy deals, they are toxic.

5.  The Toxic ARM Mortgage:  Interest-only, payment-optional, and other gimmick mortgages were sold to poor folks right at the height of the market, so that they could "afford" to buy a home they could not afford.  And when the onerous rates kicked in and the housing prices dropped in half, well, there is no way you can refinance that sort of thing, as there is no equity.  They were foreclosure proceedings written into the loan docs.

Why do people accept crappy, often dangerous deals like this?  Each contract is almost a guarantee of eventual bankruptcy.  The big  part of the problem is education - people don't understand how money works and how borrowing works.  But a bigger part, I think, is low self-esteem.  Many folks think they are "lucky" to be able to borrow money, and they accept the worst sort of terms as a way of life.

They don't seek out a 30-year fixed-rate mortgage because they don't think they deserve it, or they think that if they go to a real bank or lending institution, they will be humiliated.  So they go to the "Money Store" to borrow money, at the worst sort of rates.

Or, they get turned down for a conventional loan, and think that the banker who turns them down is being "mean" - and not kind.  So they seek out the legal loan sharks that ply their neighborhoods and borrow money from them - thinking that they are being done a favor in the process.

Here's a hint:  When a banker or other lending institution declines your loan application, that should tell you something.  Banks make money loaning money, plain and simple.  They need customers - they need borrowers.  They do not turn away business on a whim.  YOU are the customer for their business and they need you.  When they turn you down for a loan, it is not because they are being "mean" - it is because they don't think you can pay it back.  And that should be a hint right there that you should not be borrowing in the first place.

Never feel like a supplicant when borrowing money.  They are lucky to have YOU as a customer.  If you start acting deferential to lenders, well, it pretty much is all over for you, financially.  No one is doing you a "favor" by lending you money - you have to pay it back, with interest.  And if your lender says "No" to you, begging for money is the worst thing you can do.  Because there are people out there who will "lend" to you this way, but it will usually turn out horribly bad.

Credit card companies play to this sort of mindset.  "Congratulations!" they chirp, "You've been approved for a credit card!"  But this is not winning the lottery.  There is nothing to congratulate YOU about.  If anything, they should be the ones who feel lucky enough to be selected to earn 2-5% on every purchase you make, plus potential interest on any balance.  And no, you are not "lucky" when they increase your credit limit, either.

And yet most people view the credit card companies as being the ones with the power.  People obsess over their credit-worthiness and their credit score, as if it was some indicia of their overall self-worth.


You are not your debt.  You are not your credit score.  Get out of the mindset that being able to borrow money is a privilege and something that you desperately need or want to do.  You have great worth as a human being, and we were not put on this earth to borrow our way into perpetual debt-slavery.

The debt industry has cultivated this idea that you are "lucky" to borrow money and has successfully instilled the concept of debt into everyone's mind.  It was a slick sales job.  And once you are horribly in debt, like the poor folks on the Debt Guy's website, there is not much you can do, other than declare bankruptcy and start all over again.

And these "predatory lenders" do make money off the poor, in many instances, even though their customers declare bankruptcy or default on the payments.  Since the interest rates are so high, often the borrower ends up paying back more than the principle of the debt, over time, even though, with the high interest rates, the loan is not "paid off".  So someone borrowing at 25% interest ends up "paying back" the debt at an effective interest rate of 15% or more, even if they default.

For example, Payday loan places make huge amounts of money on the poor, getting an effective interest rate of 30% or more on each loan.  But since each loan leaves the borrower that much further under water, the borrower has to take out another loan.  Before long, the borrower has squandered hundreds, if not thousands of dollars in "interest" on a succession of $200 to $300 loans.  So when he finally defaults on the last one, the payday loan place doesn't care at all.  They've made an obscene amount of money off the poor fool.  They sell off that bad debt to a collection company and move on to the next victim.

I have to say, when I was younger, I also fell into the mindset that the bankers had all the power and that being lent money was a "favor".  This sort of mindset is personified in the movie "Catch me if You Can" where the father laments that the bankers "have all the power" and goes from bank to bank trying to borrow yet more money, rather than fold his failing business and moving on with life.

When I was in my early 20's, I thought that getting a car loan or a credit card was some sort of "treat" and not on onerous contractual deal where other people were making a lot of money off my toil and sweat.  Fortunately, I was smart enough to join a Credit Union and learn more about money and started taking action in my life to turn things around.

By the time I was in my 30's, I had made connections with commercial banks and was borrowing money - on my terms - to buy commercial Real Estate.  I recall one conversation with the President of a bank in Alexandria, Virginia, where we dickered over the loan rate.  He wanted 9.5% and I said, "I think 9%" to which he replied, "Well, I'll see what I can do."

You see, I didn't "need" to purchase the property, so it was an entirely optional deal for me (and really, all purchases are that way, even for "necessities").  If he didn't want to play ball, I didn't need to buy the property.  And he needed to make the loan to make the money.  And since the property was worth more than I was  paying, it certainly was a safe loan.  He gave me 9%, which at the time was not a bad rate on a commercial loan.

It started to dawn on me at that point that in terms of power, the customer is really the one who should be calling all the shots.  With the biggest shot of all being who you are going to use to lend you the money.  Bankers do compete - for good loan deals.

But if you have bad credit or are borrowing more than you can pay back, well, no one wants that deal.  So you put yourself in the position of begging for money to borrow.  And that is the worst position to be in.

And yet, most people end up borrowing like that, not for "needs" but for "wants".  They want a new TV, bling rims, a car, or a house.  They don't NEED them, of course.   You can take the bus, rent a house, or whatever.  There are cheaper lifestyle choices, but people don't want to make them, so they convince themselves that they "need" a car to get to work, and by the way, that car is a Lexus.

The old saw is, "In order to borrow money, you first need to prove you don't need it" - and it is true.  Once you get off the bandwagon of perpetual debt and actually start accumulating wealth, well the same "mean" bankers and credit card companies will fall all over each other trying to compete for your business.  They want you, because you don't want them.  And it is a sweet spot to be in.

But the best thing of all is, once you reach that point, you stop borrowing and start living.  Because being debt-free is the best way to be of all.
Newer Post Older Post Home