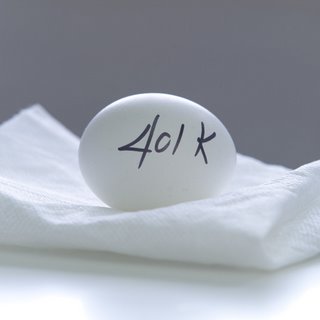 Our generation will not have the "defined pension benefits"  of earlier generations.  People even make noises that we should not expect to receive Social Security!  Instead, we are told we will have to rely on our own savings in the form of a 401(k) or IRA.  Why did we get the shaft?


One of the more popular hits on this blog is my posting on using your 401(k) to pay off your mortgage.  A lot of people are curious about this, and the short answer is, it can't be done without paying a boatload of taxes.  Sorry.

But it illustrates the ultimate conundrum about the raw deal our generation got from this self-funded retirement scam.  In the olden days - like 1960, a worker at a steel mill got paid, and then used that money to pay down the mortgage on his house.  When he retired, his house was paid for and the steel mill paid him a monthly pension, which was more than enough to live on.  And he was paid for the rest of his life, until he died, or his wife died after him.  People were taken care of, and it was a bit of  Corporate Socialism to be sure.

Today, that worker is expected to self-fund his own 401(k) or IRA, so that when he retires, he will have enough money to survive on besides Social Security.  Is this a bad thing?  I am beginning to think so, and here's why.

1.  Most People Don't Have Financial Discipline:  Look around you - all your neighbors are idiots - spending money on Jet Skis and penis boats and cable TV, while failing to fund their 401(k) or IRA.  Average savings at retirement for most Americans is less than $100,000.  How are these people going to live?  It is the next big financial crises in this country - the one no one talks about!

2.  We Knew All Along This Would Happen:  The IRS uses "withholding" to take money from your paycheck every week, because they KNOW that the average Joe has no financial discipline.  If people had to "save up" for their annual tax bill, most would be owing the IRS a boatload of dough come April 15th.  So we created "withholding" - we knew people couldn't save for a year!  Now, we expect them to save for 30 years?  What were we thinking?

3.  Nothing is Guaranteed:  Unlike the defined pension benefits of the past, no one is guaranteed with an IRA or 401(k) any kind of income for life.  You might be able to purchase an annuity when you retire.  Question is, how much do you need to retire and what is a safe investment?  Our generation will not have the relaxing assured retirement of the past.

4.  You Can Lose It All:  As I noted in my Lump Sum Payouts post, most people are ill-equipped to handle large sums of money.  One criticism of the privatization of Social Security was that individuals would make poor choices with the money and lose it all.  Similarly, when the opportunity to invest your own money comes along, most of us do a poor job of it.  And when we reach age 59-1/2, and can withdraw from your IRA or 401(k), many will squander it in short order.  If you invested poorly, you might not have much money when you retire and end up broke.

5. Going Broke to Save:  Many middle-class Americans are desperately trying to save money in their 401(k) plans, while at  the same time trying to pay off a mortgage, car loans, and credit cards.  When the market went horribly wrong last year, many folks were chagrined to find out they had enough money in their 401(k) to pay off their mortgage, but yet were "broke".  Cashing in the 401(k) simply wasn't a realistic option, unless they wanted to incur a huge tax penalty and be boosted into the highest bracket.

6. Paying the Banks on Both Ends:  As I have noted time and time again, using the tax code as an investment guide is a bad idea.  And yet, just as States are coerced into passing laws in order to get highway funds (such as seatbelt laws) we personally have to "jump through hoops" to avoid paying onerous tax bills.  So the tax code says "borrow against your home - it's deductible!" and we do.  And the tax code says "put your savings in a 401(k) or IRA - it's tax-deferred!" and we do.  And bankers are there at both ends of the deal, collecting fees on our mortgages and for managing our Mutual funds.  Meanwhile, we are pretty much broke most of the time, and if the market tanks and the value of our home goes down (as it recently did for a lot of people) you end up with NOTHING.  But the banks made out, didn't they?

7.  Loaning Money to Yourself:  It is highly likely that at least some of your 401(k) money was invested in mutual funds, which in turn invested in mortgage-backed securities, which in turn was loaned back to you in the form of your mortgage.  You were, in effect loaning money to yourself.  Why not cut out the middleman and just pay down your mortgage?  Oh, right, there is no "tax incentive" to do that!

8.  A Pig in a Poke in a Pig in a Poke:  Most of us - nearly all of us - are not sophisticated investors.  We buy Mutual Funds with our 401(k) money.  What do they invest in? Beats me!  Most of us pick a fund based on the brand name and past performance.  But past performance, as they say, is no guarantee of future returns, as we found out.  A Mutual Fund ends up being a Pig in a Poke - you have no idea what you stocks you are investing in.  And even if you did, stocks are largely a Pig in a Poke as well - hardly the "transparent" transaction the free-market people like to talk about.  Ever read an annual report and understood it? I didn't think so.  And as the antics of Enron illustrate, even if you did understand these reports, you'd likely be snookered anyway.

9.  No Social Security?  Pundits and Government Officials have been saying things for years, now, along the lines of "don't expect to collect any Social Security!" which is a nice way of saying "Screw you, we got it, you don't!"   But the reality is, as the baby boomers retire, the system will be strained.  And since so many didn't save a plug nickel, many will be living off of Social Security.  I fully expect to get a total screw-job in this department, as the Government rewards slackers (yet once again) by saying "Sorry Bob, you had the foresight to SAVE for retirement, so you don't 'need' Social Security!  We're giving your share to some crackhead bum instead!"  Just wait for it - that is how it will play out.


This is not to say you should not fund your 401(k) or IRA.  You have to.  It is the only game in town - the tax code forces us to do this.  And this is an example of the government "forcing us" or more correctly coercing us to do things that the teabaggers and flat-taxers are complaining about.  Perhaps a more value-neutral tax system would prevent some of the excesses of a de facto command economy that tax incentives produce.

I have invested a substantial sum over the years in my tax-deferred accounts.  Most are in Mutual Funds, and frankly, other than the brand name of the fund, I could tell you little about what they are actually invested in.  They could have stuffed it all in a mattress, for all I know.  While it was all going up, up, up, it was great.  When it dropped by nearly 1/3, I shit my pants.  Most funds recovered, but it was a wake-up call that perhaps I should not rely too much on stocks as my sole investment as I lurch toward retirement.

I am going to go against the tax code and pay off my mortgage.  While this may seem non-intuitive, I'd rather be able to say I owned one tangible thing, than to put that money into yet more stocks and have a monthly mortgage payment to make.  It may be somewhat risk-averse, but as we get older, we can't afford to take wild risks with our money anymore.

But on a larger level, I wonder sometimes how we got to where we are today, where everyone has to fend for themselves, no one has an assured retirement, we all are forced to march to the drum of the tax code, and as a result, all our money is handed over to bankers who say "trust me" and then steal it all.

Perhaps I am being a bit dramatic.  But ask the guy who lost over half of his 401(k) last year - the year he retired involuntarily when they closed the widget factory - and his house dropped nearly half in value.  The poor bugger was in the wrong place at the wrong time, and now he is in foreclosure, bankruptcy, and is looking forward to a meager, stressful, and impoverished retirement.

And the best most of us can do, is shake our heads and say, "I'm glad that's not ME!"