That Was a Close Call! 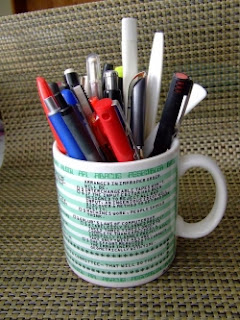 
We had a close call today.  In moving our house, we have to pack everything up.  We are trying to use this as an opportunity to go through our "things" and cull out stuff we don't need.  Well, one of us is, anyway.

I come into the office and there is this basket full of maybe 100 pens.  "What is this?" I ask.  "Oh, that's all the pens I've been gathering up throughout the house.  Just leave it there, I have to sort through it later and decide which ones to keep" .

This is hoarding disorder, in its infant stages.  My friend whose family went through this regaled me with tales of baskets, trays, boxes, and other similar containers, with things like buttons - and pens - in them.  And always the same phrase "I'm going to sort through those later" - as if it were a precious collection of rare specimens.

Here's the deal:  Junk like pens will clog up your life if you let it.  You can't spend an hour deciding what pens to keep.  It ain't worth your time!   Worse, putting all the pens in a container and saying "I'll sort through this later" - as if there was some pre-appointed pen sorting time that was better that right now.

Here's the quick triage on Pens:  Toss any that were free.  I don't care if they "work" - those cheap pens have little ink in them and dry out quickly.  Anything that doesn't work on the first try - toss!   Get in the habit of tossing bad pens, rather than "putting them back" for later (what, you are going to "fix" a 15 cent disposable "gimmie" pen that you got for free from your Insurance Agent?  Let's get real, now!).  Toss any pencil that is not at least 3/4 length.

And if you have more than 15-20 pens, pick the best, toss the rest, because they will all be dried out and dead long before you are.

I took the basket of pens and upended it in the trash - to the horror of my partner.  "Oh no!" he said, as if I was throwing out $100 bills.  We are far to busy sorting furniture to have time to sort through pens!  I picked out the 10 best ones and did a quick triage on the mug on my desk as well and junked half of those.  Bottom line, I now have a collection of maybe 15 good quality pens and no crappy dried out "gimmie" ones anymore.

But this got me to thinking about pens - I went though this at my law practice - when Associates would grab a box of pens from the supply cabinet when they needed only one.  As a result, they kept taking more and more boxes of pens - the $2.98 variety.  One Associate had over 50 pens in his desk when he left - $150 worth of ink.  Why do people do this?  And yea, $150 is "not a lot of money" in the greater scheme of things.  No, wait a minute - it is.  That's enough for a really nice dinner for two with a nice bottle of wine.  I'd rather have that, than 50 dried-up pens in a desk.

It is a lazy form of living - not keeping track of things, but instead buying multiple things and then scattering them all over.  The idea, in theory, is that you have a pen around when you need it - or a bottle opener, or a Bic lighter, or whatever.  But in practice, it means pens are jammed in every drawer, cubby, and crevice in your house, car, jacket, pocketbook, purse, briefcase, suitcase, whatever, and you never seem to find one when you need it, so you go grab (or buy) yet another.

An alternative idea is to buy good quality pens (which is why I like the $2.98 variety, not the 15-cent kind) and they always put them in the same place so you know where they are.  "Back in the Day" you were lucky to have one pen or so - and maybe you had a "desk set" with a silver pencil and pen.  Today, like with everything else, we drown in a sea of cheaply made Chinese crap - in this case, buckets of cheap pens all over the house.

Maybe I am making a mountain out of a molehill here.  But it illustrates how our culture has changed as we have become accustomed to ultra-cheap disposable consumer goods.

We dodged a bullet here today.  But it scared me that my partner is developing nascent hoarding disorder.  Sorting through pens?  I may have to keep a closer eye on him.....
Newer Post Older Post Home