The Death of Paper 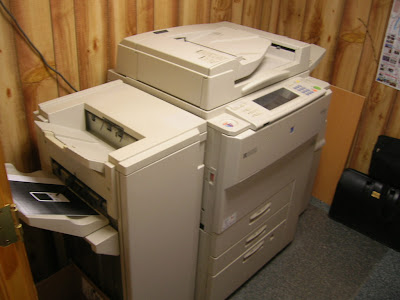 I recently sold this monster Ricoh photocopier for $200.  It was once a $20,000 machine and ran nearly all day, every day in my office.  But as of late, I never turned it on, except to make copies for neighbors.  I have another machine I am selling shortly.  My use of paper has dropped precipitously and I haven't bought a printer cartridge in a very long time.  And yet my workload, if anything, has increased.  What is going on here?  The simple answer:  Paper is dead.


When personal computers became popular in the early 1980's, paper consumption soared.  The vaunted "paperless office" never materialized - that is, until now.  In the next 5-10 years, paper will largely vanish from our economy, going the way of the floppy disc, the VHS tape, the vinyl record.  You heard it here first!

Many folks, when looking at their investments, sigh and say, "If I had only known to buy Microsoft stock back in 1985!" or "If I could have only foreseen market trends!  I could have made millions!"

And yet, market trends are not hard to forecast.  But people deny them - vehemently.  And nowhere is this more true than in the death of paper.  You want a great market tip?  Well shut up and listen.  Seriously.  You have to shut up - stop trying to talk while I am talking - trying to shout down an idea without considering it, just because you think it doesn't apply to you.

You see, the deal is, I'm a Patent Attorney.  The things I work on today, you won't see in the marketplace for a decade.  So I know, and likely, you don't.  It always humors me when some consumer shows me their "latest and greatest" electronic gadget, as if they invented it.  But the joke is, I wrote the Patent on it back in 1999 and it is only just now hitting the market.

So if you want a tip on where technology is heading, maybe listen less to the TeeVee and your own consumerist instincts and listen to how things are trending.

Paper is dead - or at least dying.  And what is killing it is cheap displays.  Back when I was a Patent Examiner in the 1980's, the vision of the "paperless office" existed.  The idea was, in the future, we'd all have "desktop" displays that literally were your desktop.  Virtual documents could be moved around at will, using your fingertips, and a virtual keyboard summoned on demand.

Sound futuristic?  Or perhaps you've seen this display at work in the last James Bond movie or on those Cable news shows.  State of the art technology, right?  No.  Again, we saw this in the Patent business back in the late 1980's.

That was 20 years ago.  Maybe you want to shut up and listen now?  Because if you want an indicia of market trends, a Patent Attorney can tell you.

What prevented the "paperless office" from becoming a reality for two decades or more?  The limitations of display technology.  The 15" or 17" CRT monitor was simply not enough display area to view a document.  Those tiny displays were like viewing a document or the internet through a cardboard tube.  So people got frustrated and wanted to "print out" a document to see it all at once - a page at a time, of course.

So printer and paper usage soared in the 1980's through today.  But now that large displays are very cheap, things are changing - and the acceleration will be swift.  I went to dual 24" displays in page mode - I can read an entire web page on one, while reading an entire page of a PDF or .DOC document on another.  And this is just the start.  36" 48" and 60" displays will become the norm in the future, as these devices (which are basically televisions) come down in price.  You can already buy a 42" television for about $600 and hook it up to your computer (I do this with my laptop).

It is the same with a lot of inventions.  The idea exists for years - waiting for some key piece of technology to be created or to become cheap enough.  The iPod?  The idea was there all along.  It only took Apple to have the foresight to buy up the entire first year's production of the new 1" hard drives to make the device a reality.  Once cheap hard drives became available, the concept "worked".  It was not so much a technological barrier as a marketing one.

And of course, newspapers, magazines, and other paper items have been waiting for the right format to come along for a "reader" device to replace them.  And that will happen, too - with frightening speed.  Within the next 5-10 years, you will see electronic "readers" displace books and magazines completely.

Mail is also dying - people are paying bills online and getting their information on e-mails - without printing out anything.  Online banking is not only a reality, it blows the doors off of paper banking in terms of ease of use and reliability.

But, what's that you say?  "Dagnabbit!  I don't trust these computer thingies!  They'll go haywire and lose all my data!"

OK, here's the deal.  Remember when I told you to shut up?   NEVER take tech advice from people who say things like "dagnabbit" - OK?

What will force you to shut up and get with it will be money.  Sure, you can get a "paper statement" from your bank.  But many banks are already charging extra for paper statements - or offering discounts for clients who opt out of them.  Since I balance my bank account DAILY online, I never need to read a Statement.  And the idea of waiting 30 days to balance your checkbook is alien to me.  It is such a hassle to try to reconcile things from a month ago - but it takes only seconds to reconcile yesterday's spending - and much more accurate as well!

Similarly, electronic versions of books and magazines and newspapers will be easier to get (they will download to your reader while you sleep) and will be cheaper as well.  No more damp papers from the paperboy or blank ink running off on your hands.

Yes, there are always a few people who claim vinyl is better than CDs  or whatnot.  But the long and short of it is, going paperless will save so much money, be so better for the environment, and be far more convenient.

Granted, there are a lot of "tech gurus" out there who give bad advice - and call these sort of shots wrong time and time again.  But most of these are clueless consumer journalists who are reading press releases from tech companies - and getting their data years down the road when products are introduced, not when they are designed.

Paper will go away - trust me.  And so will CDs, DVDs, and even blu-ray discs.  Downloading video and music from the Internet has already started, and the idea of using physical discs to transmit data will be a quaint thing of the past.  Netflix gets this and has already started doing it.  Blockbuster didn't get this, and is in bankruptcy.

So what does this mean as an investor?  Buying paper company stocks, long term, is a bad idea.  They will drop off over time - when, I cannot tell you for certain, and it won't be a sudden drop that you can profit from in a short sale.  But they will go down as the market shrinks.  And printer and photocopier stocks will also drop off.

Media companies that sell newspapers and magazines will have to adapt, and like Blockbuster versus Netflix, the company that says "dagnabbit" will be toast in short order.  We may see entire publishing houses go under - if they refuse to adopt to new technology.  But we will also see new enterprises take off.  Blogsites and online news will accelerate in this new "reader" era.

Paper books will become collectible - but only hardbound ones, and even among them, only important books and early editions.  So don't start hoarding your old airport paperbacks - they are probably going to be worthless for a long time.  And "investing" in collectible books is going to be a dicey proposition for all but the seasoned collector.

On the tech side, who will be the winners and losers?  Apple will no doubt make hay with its iPad.  But eventually, no one format will dominate, and I suspect that the readers, like the PC, will become commodity devices, with most users being format agnostics.  Content will be the selling point - and the profit point.

You may not believe this.  And I suspect you won't.  But that's why real long-term trends are never "obvious" to most investors.  Back in 1980, most people though personal computers were a fad.  Very few had the courage to invest in that market back then.  "Who knew?" you might ask.  Those who were astute knew at the time - and made a lot of money as a result.

Paper is dead.  I'm telling you now - it is the next big market trend.  Years from now, you will look back and say "Gee, why did I say 'dagnabbit' at the time?"

UPDATE 2020:  Paper indeed died in the last decade.  The generic "reader" turned out to be the smart phone or pad device, format agnostic as predicted.   That, and people pretty much stopped reading anymore, sadly.

I still run into older folks who want their utility bills in the mail and like to write checks.   They say it feels more secure - really?   With Trump's new Post Office?   I try to explain to them that a check is just a piece of paper requesting an electronic transfer, but they will have none of it.  Plus, a check is actually less safe and more expensive than online bill paying.

But those are dinosaurs and dying out quickly.  Paper is pretty much dead, and I can go for weeks now, without powering up my printer.   Back in the day - not long before this blog entry was written, the first thing I would do every morning was power up those LaserJets to get them warmed up for a busy day of printing.