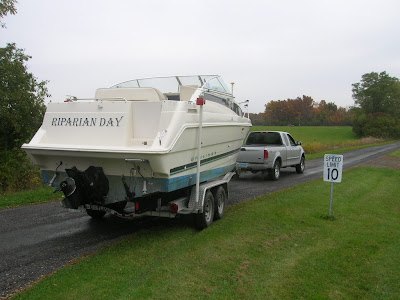 
Selling off "things" has been a somewhat liberating experience.  Owning less "stuff" actually feels better than owning a lot.  A lot less to worry about and a lot less overhead, in terms of maintenance, storage, insurance, fuel, and other expenses.  We have sold off enough stuff to more than pay off our non-Mortgage debts and also pay our taxes and fund our 401(k).

Owning things and owing money, as I have noted in a previous post, makes no sense.  Get rid of the things and get rid of the debt.  Because the things will depreciate in value, while debt gains in "value" due to interest, over time.

We sold (and are selling) a lot of stuff on eBay, Craigslist, and at garage sales, since January of this year.  A partial total of the loot so far:

Wow.  And there are probably more things I am missing!

Even taking aside the vehicles,  that comes out to about $4500 just in "stuff" laying around the house.  Stuff - worth over four grand!  And yet people cling to things in attics and closets, without thinking of whether they are worth keeping.  It is just clutter, that could be exchanged for less debt.

What is really scary, is that we are still finding things to sell - items tucked in closets and on shelves and in cubbies and in storage boxes.  The more storage you have, the more you will store things.  A post about that is in order!  Frank Lloyd Wright was right - if you have small closets, you own less crapola.  If you have large closets, the temptation is to save more and more junk.

For example, I found a used but workable alternator for my car.  It is worth $250 rebuilt and will fetch $50 easily on eBay.  I also found two burned-out alternators for my truck (rebuilt cost, $30 each - still sure you want a BMW and not a Ford?)  They were worthless.  Why did I save blown alternators?  I am not entirely sure... other than we had the space to store it, in a cupboard in the garage.

Resolved - less storage and no cupboards in the garage!

What is also interesting is that despite what my banker says, you can liquidate a lot of household goods and realize cash money.  Since this is a vacation home, we can "sell it all" and not worry about not having things.  But the various chattel items you have around your home - clothing, furniture, electronics, appliances, decorations, etc. have some inherent value, if only a few thousand dollars to a few tens of thousands of dollars (depending on how nice your "stuff" is - most people have a mountain of crapola!)

Nevertheless, it feels good to "unload" and to have a wallet so thick, it will not fold!
Newer Post Older Post Home