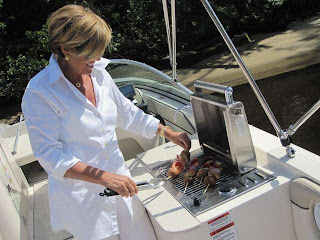 
I do not watch TeeVee, and that is a good thing.  It is full of horribly bad normative cues.  In the Boat U.S. Magazine the other day, I read that faux financial expert Suze Orman is now shilling for Sea Rays, and of course, they gave her one, which is named "Approved!" after the name of her TeeVee Show.

I don't know which made me gag more.  SeaRay makes a fine boat - that costs 2-3 times more than a comparable Bayliner (both are made by the same parent company) just as Buick makes expensive Chevies.  Someone preaching fiscal responsibility hawking luxury goods and consumption?

Worse yet, her TeeVee show is all about consumption.  People call in asking for "permission" to buy things and she listens to their little sob stories and then announces whether they are "Approved" to make the purchase.  It is also the name of her boat.

In case you missed it, being fiscally responsible is not all about consumerism - which piece of eye candy you are "Approved" for next.  In fact, if you really want to be fiscally responsible, paying cash for toys - or learning to live without - is a far better idea.  Taking on ANY debt, should be done with trepidation, not glee.  And the reason for a debt should be deadly serious - owning a home, going to college, or the like.  Unnecessary consumer goods can sink your ship fast.

And speaking of ship, boats can be a particular nightmare (more on that in my next post about my upside-down neighbor).  A boat can depreciate rapidly - far more rapidly than the balance of the loan is paid down.  So you can end up "upside down" on a $100,000 boat in short order and be unable to sell it unless you come up with $10,000 in cash - which most salary slaves don't have lying about.  Better off to pay cash - what you can actually afford - for boats and toys.  I do!

Anyway, last night, the irony of Suze Orman was ricocheting around my brain, and I had this dream about her call-in TeeVee show.  I was very groggy, but it went something like this.....

Announcer:  "Welcome to Suze Orman's 'Approved!' where you can call in and ask self-appointed Financial 'expert' Suze Orman whether you should buy some overpriced POS consumer crap - preferably on time!  And here's our host!  Suze Orman!

Caller #1: "Um, hi.  Our house is being foreclosed upon, and my wife is seriously ill, and the bills are starting to pile up.  Anyway, I was at the car dealer the other day, and he said he could get me financed on a Buick Ranier.  Do you think I should buy it?"

Suze:  "With all the expenses you are going through, plus how your credit rating is being affected, I would think that financing a car would be a bad idea, as you'd be paying the highest interest rates available.....wait a minute, did you say 'Buick'?  APPROVED!!!!  Next Caller!"

Caller #2: "Thanks for taking my call.  I was at the boat show the other day and saw this nice Sea Ray Sundancer 32.  It is $340,000, which is more than my house costs.  But the salesman said he could arrange the monthly payment low enough so I could 'afford' it.  My wife is against the idea of taking on such a huge debt for something we don't need.  What do you think?"

Suze: "Oh, the new Sundancers are nice, aren't they?  You know, I try to preach fiscal conservatism, but what the heck, sometimes you just have to 'treat' yourself, right?  APPROVED!!!"

Caller #7:  "How about a Buick so I can drive around inside my Sea Ray?"

Announcer: "Well, looks like we're about out of time, here. We'll have to wait until next week for more of Suze's expert financial advice with regard to buying consumer goods. Goodnight!"

I'm sure the show doesn't actually go like that.  But the whole idea of people calling in, like a bunch of dumb sheep, asking this lady if they can have a new toy, like a child sitting in Santa's lap - is idiotic.

The only thing more idiotic is the idea that people want to actually watch this.  Well, actually the most idiotic thing is the made-up name she uses ("Suze") which like the "Ayn" in "Ayn Rand" is totally phony.

Um. Phony.  Do you think she is telegraphing something here?  As I have noted before, when anyone starts out a relationship predicated on a lie - even a small lie - do you think it will  get better from there?

I suppose everyone has to go through this for themselves - learning that consumerism is not an end in and of itself.  You can have a lot of nice toys and things, and they don't bring happiness.  Squandering a ton of money on toys and things only makes you unhappy.

When it comes to boats, we've had three.  The first one we paid $5,000 cash for, and had a ball with it down in the keys, not caring whether it sank or not (well, not literally).  We didn't worry about its resale value or payments.  We kept it for several years and sold it for $4500. The second boat we paid $16,000 cash for, and it was a nice boat and we had it for nearly a decade before selling it for $9500.  Both boats were a lot of fun - and didn't cost much in terms of depreciation.

Our last boat, we decided to go "whole hog" and spent $65,000 (cash) on a late-model used one.  It was fun, but we worried more about scratching and denting it, and when we sold it four years later, it was worth only $30,000 - more depreciation that what we spent on both previous boat's purchase prices!

Sea Rays are beautiful boats - but priced accordingly.  I am not sure how someone who is trying to preach fiscal responsibility to the masses can be a spokesperson for high-end boats and high-end cars. She is also getting into the wine business, apparently, hawking Sonoma County wines or something.

She is an interesting phenomenon - you don't see many Lesbian whores out there.

I don't blame her for going for the money - Ayn Rand style.  She is looking out for Numero Uno and that is considered acceptable behavior in this society.  But, if you follow the advice of a "financial guru" who spells her name funny and is a paid product endorser - well shame on you.

Consume less than you are capable of.

In financial management, this translates to "spend a penny less than you earn" and in weight loss to "burn more calories than you consume".  If you do both, you will accumulate wealth and lose weight.  Most Americans are doing the opposite - accumulating debt and weight.  Look around you!

And with both weight loss and financial management, there are "gurus" out there who claim they can help you if you buy their book, watch their show, or purchase the products they are hawking.

You cannot spend your way to wealth, you cannot eat your way to slimness.  Less is more.  If you really have to read "Sooze" Orman, put a stick in her eye and check her book out of the library - she gets no royalty that way.

But if you want real solid financial advice, look deep within your own self, and stop believing in Santa Claus and start really believing in yourself and do what is hard, not what is easy.

Fiscal discipline is not easy - it is hard.  And you can't get it out of a book, either!
Newer Post Older Post Home