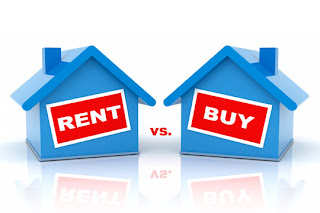 Should you Rent or Should you Buy?  As with everything else, "do the math" first!
As I have noted many times in this blog, owning a home is not the end-all of humanity.
Nor is it the "American Dream."

The "American Dream" - in case you missed it - is to be able to succeed on your merits, regardless of your race, gender, social status, wealth of your parents, or lineage.  To be able to start with nothing and make it on your own - THAT is the American Dream - not owning granite countertops.

In the last two decades, people have seemed to miss that point, to their own detriment.

This recent article on CNN discusses whether it is better to buy or rent.  Trulia uses a litmus test - if a home costs more than 15 times the annual rent, it is likely overpriced.

I prefer a simpler test - if the cost of owning a home, after all deductions are taken into account, is MORE than the cost of renting a similar home, then you should think about RENTING.

If you don't plan on living somewhere for a minimum of 5 years, then forget about home ownership - chances are, you won't recoup the transaction costs.

Regardless of which "litmus test" you use, at least THINK about what you are doing and don't just jump on the "I desperately need to own a condo, because all my friends will think I am lame for renting" bandwagon.

The overwhelming urge to own Real Estate is what drove the last "balloon" that burst.  People bought property and never thought about whether it was cost-effective.

Let's take a typical example and apply some litmus tests and see how they pan out.

Joe moves to Washington DC and wants a place to live for the next five years.  He looks at Condos and sees one in Huntington for about $150,000.  To rent the same condo would cost $1200 a month.  I know this, because I own the Condo in question.

So his total monthly cash flow is $1445 a month to live there.  This is more than the $1200 a month he would pay in rent.  So it is a bad deal, right?  Well, we aren't done yet.  If he is in a 25% marginal tax bracket, he will get a refund equivalent to about $200 a month in his taxes, bringing the price down to $1245 a month, which is closer to the cost of renting.  So arguably, it is a wash.  If he is in a higher tax bracket, he might come out slightly ahead.

But throw in a couple of other items, and it might not seem so great.  For example, maintenance is now his responsibility.  Factor in a couple hundred bucks a year there, to replace a leaky sink or whatever.  And hopefully he won't have any major repair issues - he is assuming a risk here, without a lot of reward.  And then there is the opportunity cost of tying up $15,000 in a Condo that could go down in value (risk again) or just remain flat.  If history is any indication, housing prices will appreciate slowly - 2-3% per year, for the next decade.

So he is paying a little more to own than rent.  Maybe he will make it all up on the resale, when it appreciates in value?

Well the problem is, in five years, the appreciation may be 10-15% in this market (at 2-3% per year), which means he may make $15,000 to $22,500 in appreciation - tax free, too!  But since he has to pay a Realtor 6% commission on the sale, plus closing costs when buying - and when selling (including loan points, tax and deed stamps, recording fees, attorney's fees, title insurance, etc.) this could equal another 4%.  So you are looking at 10% in closing costs to buy and then re-sell a property.

So if he stays only five years, he ends up making no money (assuming 2% gain per year) or maybe a few grand (assuming an optimistic 3% gain per year).  By renting, he assumes no risks at all, and "misses out" on not a lot of appreciation or profit.

If he plans on staying 10 years, he might make out.  But living in that Condo for 10 years would be like serving a prison sentence.  Unless he kept it as an "investment" (and played amateur landlord) it is not a winning deal.  And likely if he sold, he would need the money for a down payment on his new home.  And if he left the area (typical of Washington DC) he would have to sell, as owning a remotely administered property can be a nightmare (ask me!).

So from my analysis, it would be cheaper, easier, and less risky to rent there than to buy.

What about Trulia's rule of thumb?  Their test is 15 times annual rent, or $216,000.  At that rate, the property for $150,000 would be a bargain.  But again, their "test" does not factor in length of ownership.  So the Trulia "litmus test" is far more optimistic than I am.  And perhaps their "test" was not intended for Condos, which have additional carrying costs (Condo fees) over and above P&I, insurance, and property taxes.

A litmus test like that does not factor in a number of things, including repair and maintenance costs, special assessments, tax bracket (which makes a big difference in that refund department), and length of ownership.  It might be a good starting point for analysis, but not an end point.

Traditionally, most responsible Real Estate Agents have suggested a 5-year minimum to own a home, if you want to recover your closing costs.  So in addition to the Trulia's "litmus" test, you need to "do the math" on actual costs as well as transaction costs over time.

In the case of the Condo in question, there is also a $5000 Special Assessment that Joe would have to pay while he owned the place, which would further imbalance the scales.

Kudos to CNN for publishing an article for at least raising the "Rent versus Buy" question and kudos to Trulia for at least having some sort of test (instead of being a mindless cheerleader for owning Real Estate).  Whether their actual threshold is realistic is beside the point - at least they have a test.

For many markets right now, it is very cheap to rent - much cheaper than buying.  You are not "missing out" on any housing boom, as the market will not be coming back quickly any time soon.  If you don't plan on staying very long, leave your options open and think about renting.