Are all Motivational Speakers Frauds? YES. 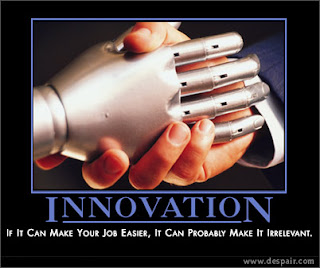 This parody of a " Successories"  poster illustrates how stupid and superficial these types of "motivational" items are.  People are by nature, motivated to do their jobs.  If they are not, hiring a "motivational speaker"  will probably make them less motivated.  If you apply for a job at a place with these on the wall, watch out!


If you work for a company that closes the office for a day, so you can go hear a "motivational speaker" - stay behind and update your resume instead.  No organization can be successful merely by wishing to be so, as Motivational Speakers claim.  And any company that squanders not only the funds necessary to hire motivational speakers, but also wastes vast amounts of human talent by forcing people to attend these mindless rallies, is sure to go belly-up in short order.

So why do people follow motivational speakers? Why do some companies hire them?  It may seem counter-intuitive at first.  But motivational speakers basically are the descendants of old P.T. Barnum - selling people what that want to hear.  Their mantra is that you can get what you want, merely by desiring it - by having the right attitude - and that other things, like talent, education, quality, and cost control, are less relevant.  Any company that follows the formula of the motivational speaker is driving the bus off the cliff.

And yet, many companies hire these clowns and stay in business.  The reason is, of course, that the damage done to the company, while extensive, is not always enough to sink it - right away.  It may take time for employees to be "de-motivated" by these experiences - realizing that a motivational messiah is being paid a million bucks, while they, as working employees, are denied raises.  And it may take a while for the more talented employees to see the writing on the wall and leave.  But will happen, over time.

You see, if you are in business selling widgets, what will make your company more successful is to have better widgets and a lower cost.  Once you do that, all the "motivation" in the world won't make an ounce of difference.  The company selling crappy, overpriced widgets will fail in the marketplace, no matter how many motivational speakers they hire.  And yes, this is in part what happened to GM.

When companies start to fail, the writing is on the wall for everyone to see.  Managers, often confounded with difficult choices, opt to deny reality (and thus deny having to make hard choices) by going to esoteric solutions or to motivational seminars - both of which often serve only to accelerate the demise of the company.

When I was at GM, I worked in the Ball Bearing division (New Departure-Hyatt Bearings).  We had a division manger who was responsible for running three factories.  Out cost structure, in terms of labor, was nearly triple what our nearest U.S. competitor was paying, as we paid UAW wage scale while our competitor paid cheaper wages, to union workers who were non-automotive.  And of course, our overseas competition was murder - offering staggeringly higher quality at lower prices.  It was a game with the deck stacked from the start.  The only solution would be to lower labor costs - or close the factories.  The former was deemed "impossible" while the latter ended up being inevitable - particularly due to the inaction of management.

Our division manager, however, had other ideas - pretty far out ideas.  Motivating the workers, he said, was the issue.  And the workers were not motivated because the environment they were in was claustrophobic and depressing.  His theory was that the machines were "too tall" and thus the workers could not see about them - and thus became depressed and worked less hard.

His solution was to build an entire factory where all the machines would be five feet high or less.  And it was done, too, at considerable cost to the company.  Of course, not all machines could be made five feet high, so pits were dug in the floor to mount the machine below floor level so that only five feet of the machine would protrude.

It was, to say the least, a nightmare.  When things broke down (which they often did in this scenario) people had to crawl down into unsafe pits to maintain machines or fetch parts.  Conveyor belts had to jog up and down, as they could not extend to the ceiling, but only five feet (or sometimes extend below grade).  The entire theory of modern plant design - the single story flat-floored factory - was defeated.  Altering or moving machines became impossible, making manufacturing totally inflexible.

Worse yet, when selecting machine tools, as I was assigned to do, we had to take height into consideration as the ultimate criteria.  So a machine tool that cost 50% more, had a lower output rate, and was not as accurate was selected over better machines simply by the fact it came in a 4'11".

And of course, the vaunted theory of the five-foot-high factory didn't work as advertised, but was a nightmare.  The problem with employee morale was that they were in fact overpaid and under-worked, and people who are spoiled tend to go looking for trouble and hate their jobs.  And even if they could be "motivated" by shorter machines, it is highly unlikely they would make up the nearly 3:1 delta on labor costs we were facing.

This inept manager's reward for this multi-million dollar nightmare?  He was promoted to head of Guide Lamp division.

But the key here in understanding these folks is to look at their own records.  The record of "achievement" if often spurious and vague, if not outright fraudulent.  They have accomplished little in the way of real progress in life, other than to shout their blandishments at motivational meetings.

Having a good attitude in life is, of course, a good thing.  But like these misguided "self-esteem" classes they hold in the inner city ghettos, attitude without underlying factual basis to support it is meaningless at best, and corrosive to the soul at worst.

Telling some poor kid from the ghetto who is failing all this classes that he should have "self-esteem" is not the answer - the kid knows he sucks at school and his father is a crack addict.  Self-esteem is the goal of getting good grades, leaving the ghetto, getting a good job and taking care of yourself.  You can't have the reward of self-esteem without the sacrifice and hard work it takes to get it.

Similarly, telling a worker at a company that sells substandard products and is losing market share that if only they had the right ATTITUDE the company would be profitable, is nothing short of cruel.  All this is doing is taking management ineptness and passing it on to the worker - as if the worker were at fault for the poor management and problems in the factory.

And that, in short, is probably what the managers who subscribe to this nonsense are doing - trying to say "Hey, it isn't me - its these crummy workers and their lousy attitudes!  I hired the best motivational speaker there was!"

The reality is, most workers want to do a good job.  They want to cut costs and help the bottom line.  You don't need to "motivate" them to "think outside the box" to provide "continual quality improvement."   In most cases, they are trying to do just this - but their ideas are dismissed at meetings or are told "we'll get back to you on that."  Before long, they stop trying.  If your workers are not motivated, it is the fault of management for de-motivating them, and a motivational speaker is not the answer.

And sometimes, closing the factory and moving on IS the only solution.  But many managers, particularly the middle-level kind, reject this because it means they will be out of a job.  So motivational speakers are hired and the real problems of being competitive are papered over with blandishments and sloganeering.  The underlying problems of bloated management, high labor cost, low productivity, poor product design, outdated manufacturing equipment - and other real-world issues that good management should address - are ignored.

One of the blandishments the motivational speakers at Carrier said was "We want you to worker smarter, not harder!"   But in reality, what they really needed was for people to work harder - and for less money.  Our union wage scale was about 3x of our competitors and 10x of overseas labor.   The same things were tried there as at GM - esoteric engineering solutions to "leapfrog" the competition (the Vega Engine, the Spiny-Fin Coil).   But when the technology backfired, well, we were worse off than before.

Both plants have since closed and the jobs moved overseas.   Perhaps if management and labor worked together to develop solutions earlier on (and that means pay cuts)  the plants would still be in business.  Or maybe the closures were inevitable, and the money spent on motivational speakers and esoteric engineering would have been better spent returning profits to the shareholders.  Just a thought.
Newer Post Older Post Home